To mark the Year of Youth and Dynamic Progress, the World Tribune is highlighting representative SGI-USA youth who are using their Buddhist practice to excel in their professions.

Ikeda Sensei often speaks about the importance of our attitude at work, reminding us: “Mr. Toda taught me, ‘In faith, do the work of one; in your job, do the work of three.’ To succeed at your work, to become an exemplary asset to your workplace, is proof of the power of your faith” (Aug. 2, 2019, World Tribune, p. 3). Here are their stories. 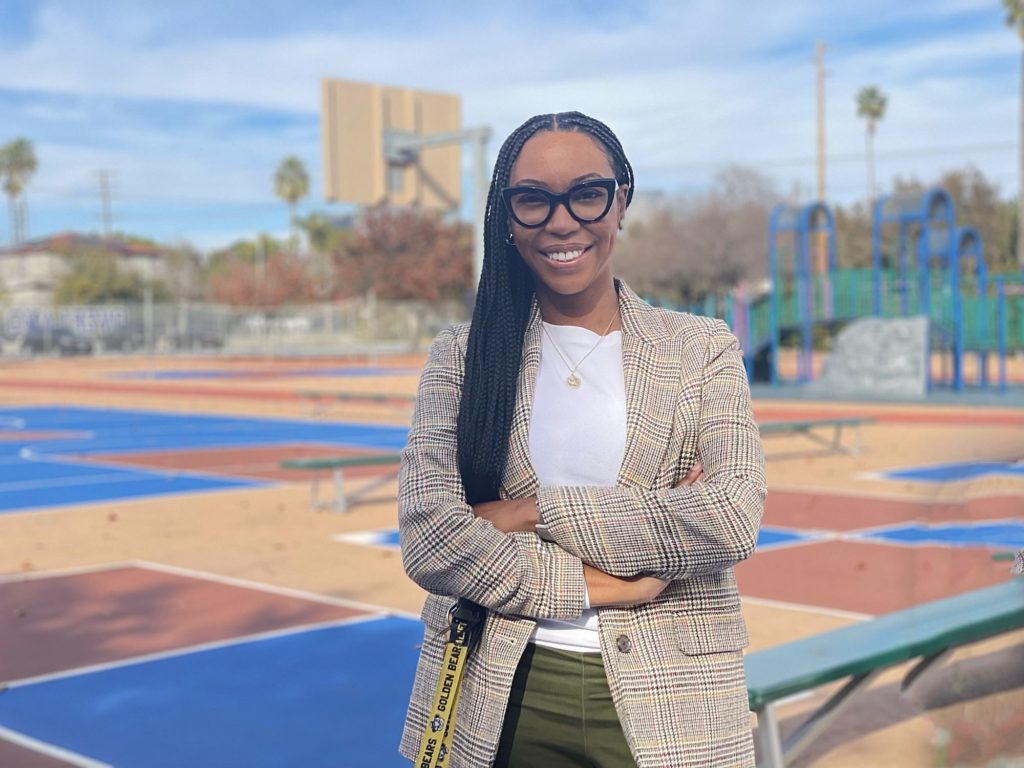 Brittany Jones has served as a teacher and coordinator for the past nine years in the Los Angeles Unified School District. She was recently appointed an elementary school principal, making her the youngest to serve in that capacity for the second largest public school system in the country.

Recently, the school librarian said to me, “Brit, you’re always at ease in the middle of chaos, focused on others. How?” I had to credit Nam-myoho-renge-kyo.

When our principal announced in October her intention to retire, and personally encouraged me to apply for her position despite my shortage of qualifications, I thought, Who, me?

Throughout the interview process, I chanted to banish self-doubt and convey my humanity and optimism, while asking myself, How would Ikeda Sensei answer this question?

I received news mid-December that I would be the next principal, strengthening my conviction tenfold that no obstacle is unbeatable. Though rules and policy say one thing, if our goals are for the greater good, we can reach them with our Buddhist practice. As a former teacher, coordinator and now as principal, I’ll continue to bring to work the conviction that, by believing in one another’s goodness, we will find solutions together. 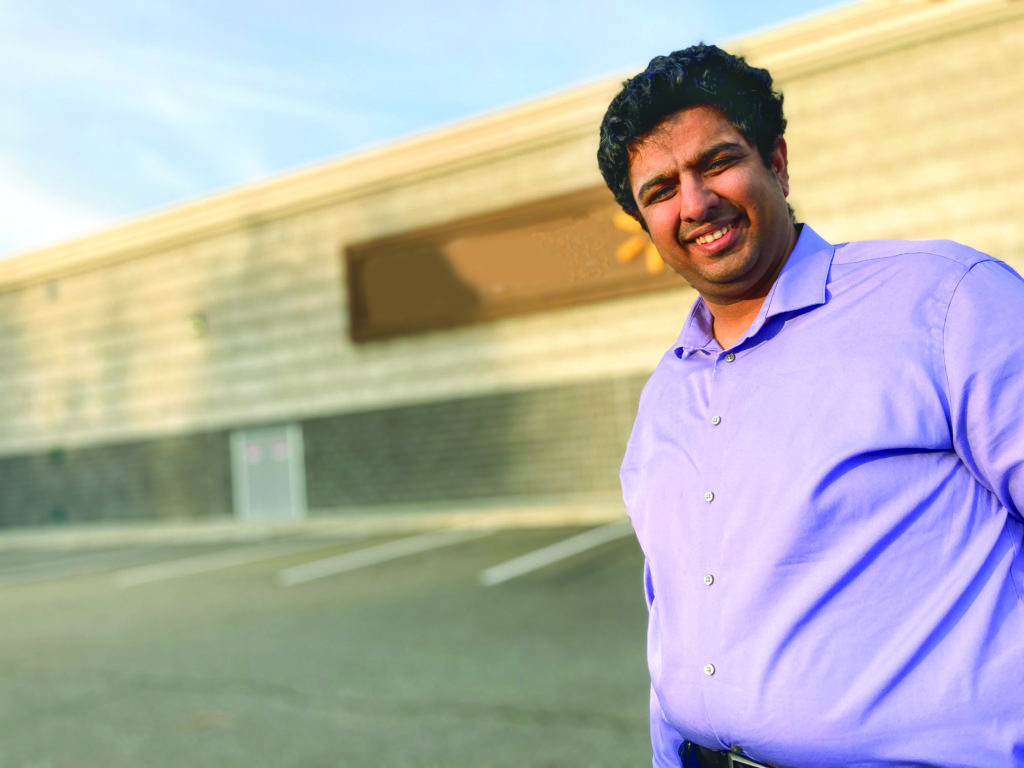 Tushar Dadlani worked as a senior software engineer at several companies before starting Explorer.ai in 2017, a tech company that uses artificial intelligence to generate mapping for self-driving cars. As co-founder and chief technology officer, at age 28, he sold the company. He was recently hired by one of the world’s top retail firms.

In Silicon Valley, some people are focused on accomplishing huge abstract goals. I believe technology can make the world better, but only when people’s lives are taken into account. My Buddhist activities, especially meeting young men’s members one-to-one, help train me to focus on people’s lives.

I started my career working as a software engineer. I started my own company focusing on self-driving cars, which was acquired by a startup. But I wanted to work somewhere I could bring value-creation to the tech world and positively impact many people.

A few months back, I moved to a large retail corporation. Here, I work with many diverse perspectives and impact millions of customers. I try to encourage my colleagues to see how our unity can impact many others. 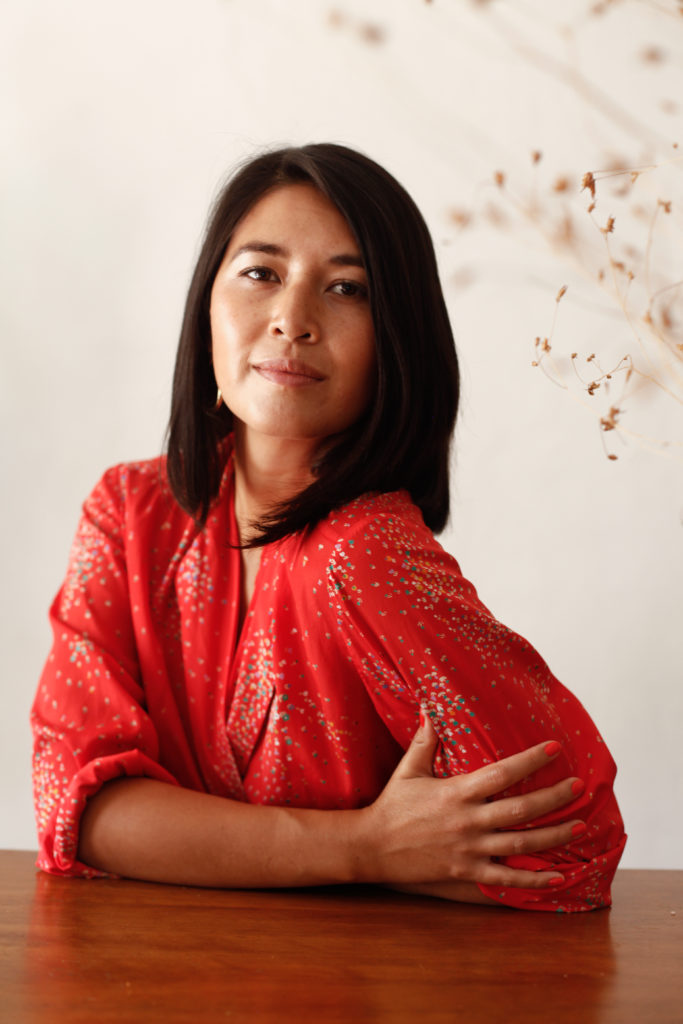 Megan Tan’s documentary memoir Millennial, a podcast about coming of age, grew to a bimonthly series with some 400,000 listeners. Her work “WILD: How Do I Love Someone?” has been named “Best Episode of 2021” by Apple podcast, as well as The Atlantic.

My shows and my daily life are guided by the Buddhist principle of human revolution. We are the protagonists of our lives. Whatever our situation, it’s up to us to bring forth the wisdom and life condition required to create value from it. When I enter a room and it’s boring or tense, I think, Watch me change this room, because I’m Nam-myoho-renge-kyo. And I do.

When I’m on the edge of burnout, working with strong personalities, I remember that the work is bigger than me. The mission of my shows is to serve people, to tell the stories of those who are not often given a space to tell them. By keeping in mind a goal bigger than ourselves, we break through together. 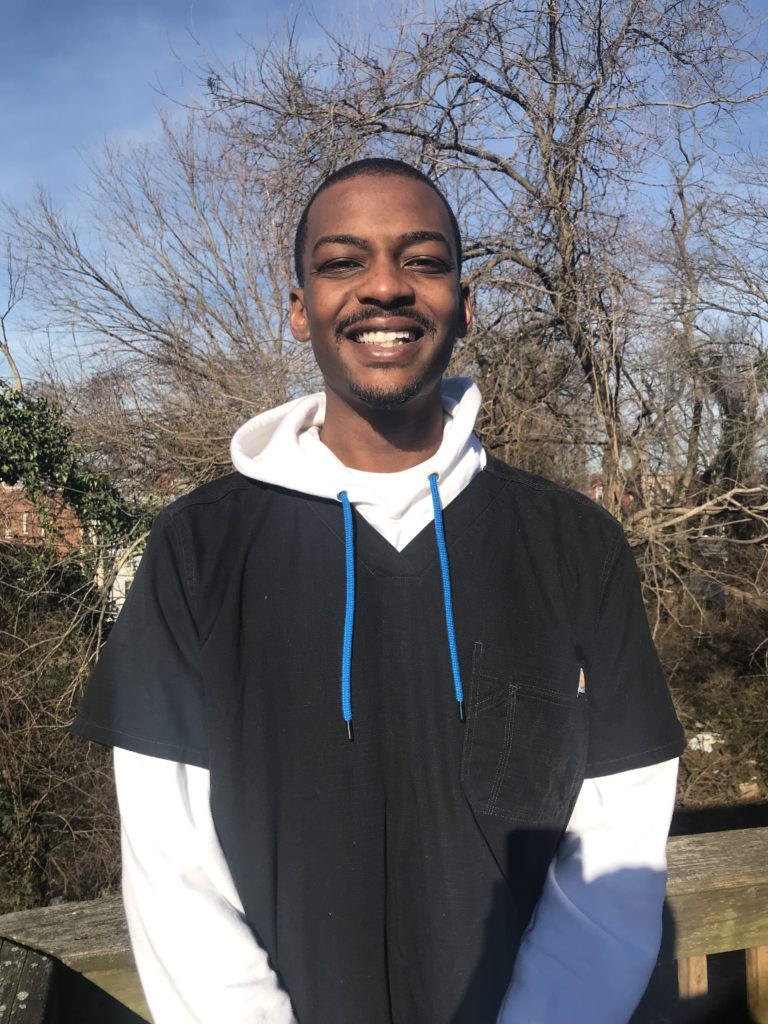 Dion Moore became a nurse at 21 and started a new role at a pediatric health-care facility at the height of the COVID-19 pandemic. As a frontline health-care worker, he has worked throughout the pandemic to safeguard the lives of his young patients.

I have always been sensitive to the needs of others, and nursing goes hand in hand with providing care and comfort to those in need.

Currently, my patients are future division-aged kids with mental and physical ailments. I find that this generation is always looking for people to inspire them. For me, they are entities of the Mystic Law who have their own unique mission. They pick up on my energy. If I’m not resolved, they immediately sense that.

My days can be challenging, but my daily practice of chanting and reading Ikeda Sensei’s guidance is what sustains me. I often deal with critical issues for the kids and their parents. Many of the parents don’t know how to encourage their children, and they suffer. I try to show them that their kids can still enjoy life in a major way and that has a significant impact on their families.

I’m planning to further my education so that I can make an impact on more people. 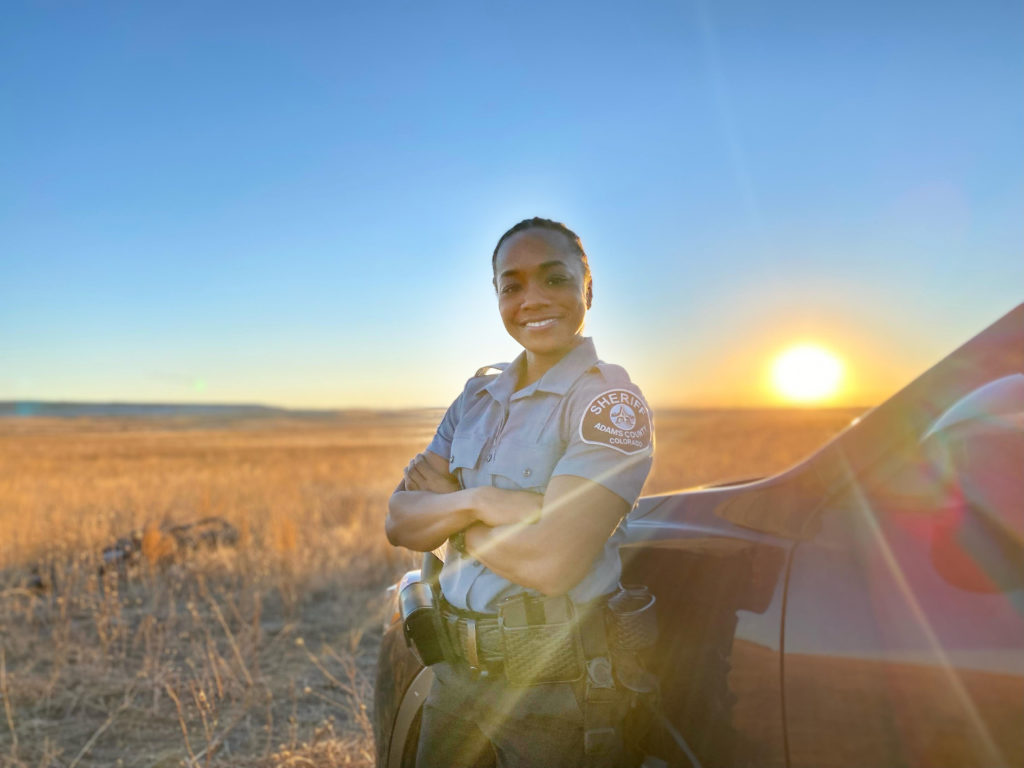 During the 2020 surge of civil unrest in response to acts of racial injustice, Crystal Fraser decided to become a police officer to create the change she wanted to see in the criminal justice system. She graduated from the police academy in September 2021 and now works as a deputy sheriff with the Adams County Sheriff ’s Office.

I grew up in inner city New Jersey, where law enforcement isn’t well received. I always wanted to create change in communities that needed it. But 2020 is when I finally had the courage to pursue a career in law enforcement. Seeing the racial injustice happening in our country, I wanted to transform it and bridge the gap between law enforcement and the community.

I’m now a deputy sheriff responsible for keeping the jail and incarcerated people safe. I interact with people at the lowest points of their lives, some of whom have done horrific things. My Buddhist practice enables me to show everyone respect.

During a recent shift, a notoriously difficult person was distraught. I patiently spoke with him. He later said, “You’re the first person that has shown me compassion.” It was one small moment, but I thought, OK, I’m doing something right.

Toward actualizing Ikeda Sensei’s vision for kosen-rufu, I want to make the community a place where people want to be. 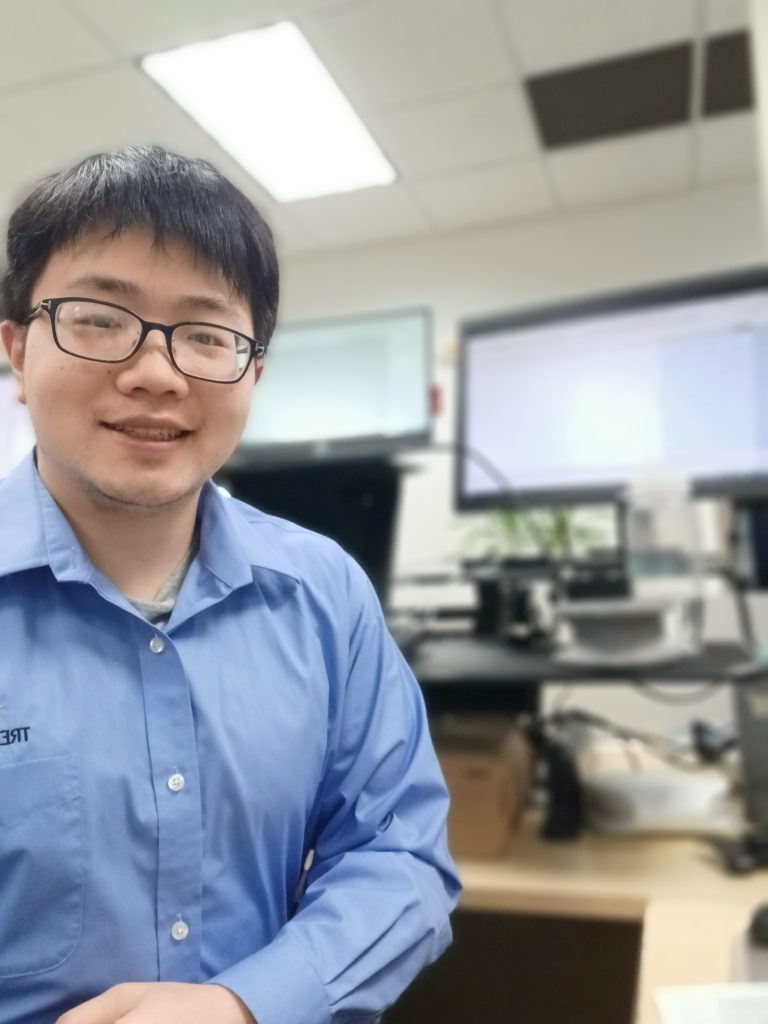 Calvin Cheng is a product design engineer at an international company leading in engineered polymer solutions, where he is one of the youngest lead engineers.

I love the work that I do. I’m a product engineer and have been with my company for six years. I design products that are critical to the safe application of large machinery such as dams, submarines and construction equipment. Currently, I’m in charge of an entire line of material and taking graduate courses to be better equipped for the role.

My motto is to never be complacent, and I am always asking myself, What can I do to contribute more? As a result of that attitude, I have gained trust at work and have been given more responsibilities.

My co-worker and I often have completely different opinions and, for me, that’s a strength. It takes many different kinds of people to succeed as a team. Taking Ikeda Sensei’s guidance to heart, I’m striving to raise successors in the SGI and at work.

Sincerity Is the Key to Vibrant Growth: Shijo Kingo—Part 3 of 3