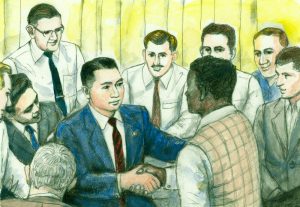 The scene moves from Seattle to Chicago, then to Toronto, Canada, dressed in autumn foliage.

A woman, carrying a large tape recorder and out of breath, arrived at the hotel in Seattle. She did so out of her sincere desire to record Shin’ichi’s guidance for her fellow members. Though feeling ill, Shin’ichi continued to encourage each person he encountered.

At the airport in Chicago, Shin’ichi was welcomed by a group of members singing a Soka Gakkai song, the “Song of Indomitable Dignity.” Shin’ichi shared with the leaders traveling with him his vision for establishing a general chapter in the U.S., as well as visiting India and Europe.

At Lincoln Park, Shin’ichi witnessed a young African American boy who was left out of a group of children playing ball. Feeling anger and indignation toward racism and the prejudice lurking behind it, he keenly sensed the importance of spreading the Mystic Law, which is a teaching of universal respect and equality. In contrast, the discussion meeting he attended later was a harmonious gathering of diverse races.

Next, the delegation flew to Toronto, Canada. They had been told that no members lived there, but when they arrived at the airport, they were greeted by a young Japanese woman. She had been instructed by her mother, who was a Soka Gakkai member in Japan, to welcome the group at the airport. Impressed by Shin’ichi and his sincerity and thoughtfulness, she later joined the Soka Gakkai. 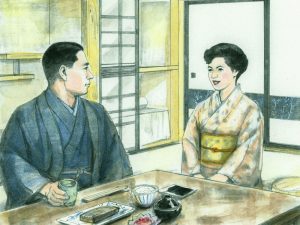 Hearing her stouthearted words, he felt a momentary twinge of remorse, but more than anything he was gladdened by her invincible spirit. Her words had given him immense courage.

From now on there would probably be almost no time for him to play with his children or to enjoy quiet moments at home with his family. It would be unbearably lonely for his wife. However, Shin’ichi had vowed to dedicate his life to kosen-rufu, and Mineko, as his wife, boldly showed her resolute determination to support him.

Shin’ichi did not desire ordinary, mundane happiness for himself. In some respects, he gladly chose to sacrifice himself for kosen-rufu. Thus he was deeply touched and gratified to learn that his wife was of the same mind. (The New Human Revolution, vol. 1, revised edition, p. 143)

Wherever it may be, the advancement of kosen-rufu depends on the presence of one person with the lion’s courage to stand alone. Without someone who is determined to boldly confront all obstacles and take on full responsibility for kosen-rufu, there can be no progress or development. (NHR-1, revised edition, 181)