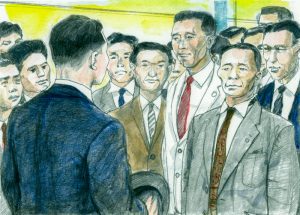 On their way from New York to São Paulo, Brazil, Shin’ichi outlined his plans to establish a chapter in Brazil. Jujo was taken aback by Shin’ichi’s tenacity and sense of mission for worldwide kosen-rufu, for in spite of violent turbulence on board and with his dire health, Shin’ichi was thinking of how to advance kosen-rufu in this country.

The party arrived at the airport in São Paulo past 1:30 a.m. More than half of the members greeting them were Japanese men who had immigrated to Brazil as farmers. Shin’ichi expressed his deep appreciation for their sincerity and promised to usher in a new dawn for kosen-rufu in Brazil.

The next day, the leaders visited different areas, and in the evening they conducted a gongyo meeting. Afterward Shin’ichi continued to meet with the leaders late into the night to discuss the formation of the chapter. He also stayed up to write letters of encouragement to a few of his fellow members back in Japan.

At the discussion meeting the following day, Shin’ichi listened to the hardships that these Japanese emigrants endured. He talked about prayer based on a vow for kosen-rufu and the importance of making steadfast effort and exercising ingenuity. When he announced the establishment of Brazil Chapter, members were overjoyed and filled with fresh determination.

After his visit to Brazil, Shin’ichi returned to Los Angeles where he announced the formation of Los Angeles Chapter. Over the course of the 24 days that marked his first travel for peace, he visited nine cities in three countries and established two chapters and 17 districts. He returned to Japan on the evening of October 25. 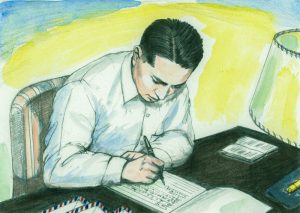 It was past midnight when the discussion ended.

Although Shin’ichi was so physically exhausted that he felt dizzy, he reached into his bag for some writing paper. He then sat down at the table and began to write a letter of encouragement to a fellow member in Japan. Indeed, he wrote several such letters.

Despite his extreme exhaustion, Shin’ichi’s heart beat vibrantly, filled with delight at being here in Brazil, breaking new ground for the development of kosen-rufu in place of his beloved mentor, Josei Toda. This joy and fighting spirit became a passionate cry for kosen-rufu that filled his entire being and caused his pen to fly across page after page.

To one chapter leader, he wrote: “Right now, my sole thought is to carry on President Toda’s intent and dedicate myself to completing the foundation for kosen-rufu, even if it costs me my life. People are vital to this endeavor—people of outstanding ability. I fervently hope you will always join me in this task and courageously walk the path of your mission to the very end. And on my behalf, I hope you will love every member of your chapter with all your heart and guide them all toward happiness.”

The members in Japan had no idea of the circumstances under which he wrote these letters. Later, however, when they learned of the ill health that had plagued him during his overseas journey, tears welled in their eyes as they fiercely renewed their vow to struggle alongside him for kosen-rufu.

It is only sincere actions that have the power to move people’s hearts. (The New Human Revolution, vol. 1, revised edition, pp. 264–65.)

Prayer in Nichiren Buddhism means to chant based on a pledge or vow. At its very core, this vow is to attain kosen-rufu. It means chanting resolutely with the determination: “I will realize kosen-rufu in Brazil. Therefore, I will show magnificent actual proof in my work. Please enable me to somehow bring forth my greatest potential.” This is what our prayer should be like.

It is also important that we establish clear and concrete goals for what we hope to achieve each day and then pray and challenge ourselves to achieve each of them. This earnest determination gives rise to wisdom and resourcefulness, thereby leading to success. (NHR-1, 269)

All people are pioneers traveling the unknown frontiers of life. Therefore, it is up to you alone to cultivate and develop your own life. You must wield the hoe of faith, sow the seeds of happiness and persevere tenaciously. The sweat of your efforts for kosen-rufu will become precious gems of good fortune, brilliantly dignifying your life forever. (NHR-1, 274–75)