I read relentlessly as a child, hunkering down in my room over a pile of books. I used my studies to drown out the partying, drinking and fighting often going on downstairs. My studies were a handy escape, and I trusted my intellect to protect me. Usually, it did.

At the onset of the pandemic, in March 2020, I’d made the financially necessary decision to move back into my parents’ home at age 28. I’d been living on my own, working part time as a tutor, interning at a hospital, taking pre-med college courses and supporting the young women in my chapter.

At home, I perceived for the first time unhealthy dynamics that had been around since I was a child. The fear and uncertainty of the pandemic strained us all—my parents, my three siblings and me. By May, I was holding my breath, crossing fingers and toes, waiting for something to burst.

Since receiving the Gohonzon in 2016, May had been a joyful time for me; I’m a decisive person and enjoy challenging my obstacles with sincere contributions and spirited prayer. But this time, I was full of worries. For the first time, I could not decide whether I should participate. I felt torn between my intellect and my prayer but kept chanting for courage about it in front of the Gohonzon.

Indeed, my environment soon demanded courage of me. In mid-May, a conflict escalated at home. Things grew increasingly tense over the next few days, and I ultimately felt I had to leave home abruptly. I wasn’t able to take much, but I did take A Youthful Diary, Ikeda Sensei’s journal as a young man.

College finals had moved online due to the pandemic, but my hotel’s internet was too unstable to use. So I took my exams in my college’s 100-degree parking lot, cranking the AC in my  Hyundai Accent and praying the engine would hold.

Soon, my sister came to stay at the hotel, too. I couldn’t shake the feeling that our family was falling into too many pieces to put back together. I was heartbroken and felt powerless. Yet as I heard how other members were challenging major obstacles with the May Commemorative Contribution activity, I felt I could not give up on my heart, on the spirit of appreciation for my life.

One of my leaders read me a passage from Nichiren Daishonin to one of his disciples, assuring them that the prayers of a practitioner of the Lotus Sutra will never go unanswered. I engraved this passage in my heart, continued to support other young women and brought my all to my hospital internship. 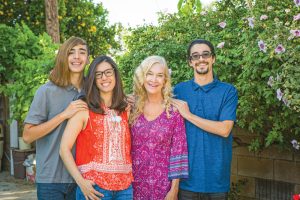 Some amazing things happened. My mother’s best friend came forward to pay for the hotel, and soon after, a friend of mine invited me to stay at their place. I stopped hesitating and immediately opened my membership portal to participate in contribution. I wanted to give, and it was joyful, even though I was in a hard spot.

Over the following months, I moved between friends’ houses and hotels. The young women I met with over Zoom commented that it seemed like I was always in a new room. I sometimes dreaded those calls, wondering how I could possibly encourage another person. A Youthful Diary deeply comforted me. Sensei describes his drab one-bedroom apartment, sleeping on the floor, battling illness, yet burning still with a desire to encourage others. My prayer became to encourage even one person, regardless of what I was going through.

In August 2020, I settled into a beautiful studio apartment. A couple of months later, I received a text from my mother: I want to come to a Buddhist meeting.

What? She had decided to move out with my three siblings, into a place out in Big Bear, California. I had texted her the links to a few Buddhability podcasts, but she never mentioned them. But once she’d made the move, she began to listen, even chanting Nam-myoho-renge-kyo on her own.

I began to have hope that we were moving toward a harmonious family. She set a clear goal: to move back into the family home together with her children. For months she paid, on her teacher’s salary, for both the family home and the place in Big Bear. It seemed to me that the home would go into foreclosure. Then, in July 2021, I received another unexpected text. My mother had just purchased the family home.

It wasn’t magic, it wasn’t strategy and it wasn’t intellect. It was her attitude. Through chanting, she had reached into a deep part of herself that had the courage to take action for the happiness of everyone involved. She moved back in and invited me to come live with them. Our house, a house I had left in fear and pain, is now full of love and laughter.

Last May, I graduated with my associate degree in biological sciences with highest honors. This February, my boss surprised me by offering me the position of director of training and education at the hospital where I’d been interning. “We see the way you interact with the other interns,” he said. “You’re not just in it for yourself—you want everyone around you to win, too.”

As May approached once again, my mother and I have both set contribution goals. I know I will be contributing out of joy, and out of a newfound confidence that wherever my rational mind sees impassable mountains, I can rely on my prayer to move them.

“Therefore, we know that the prayers offered by a practitioner of the Lotus Sutra will be answered just as an echo answers a sound, as a shadow follows a form.”

The Future Is Now!

For Youth, a Message of Empowerment