Ikeda Sensei has had dialogues with leading figures throughout the world to advance peace. More than 80 of his dialogues have been published as books. This series highlights these dialogues. The following are excerpts from A Lifelong Quest for Peace (pp. 71–74).

The Obstacle of Nationalism 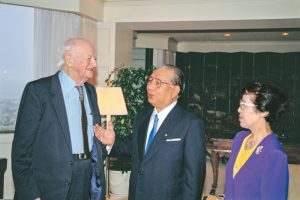 Daisaku Ikeda: In [your book], No More War!, you make a statement with which I, as a Buddhist, am in complete accord:

I believe that there is a greater power in the world than the evil power of military force, of nuclear bombs—there is the power of good, of morality, of humanitarianism. I believe in the power of the human spirit.

The issue of war and peace involves more than military preparations and political systems. It demands that we examine matters from the fundamental standpoint of the human beings responsible for both arms systems and political actions. Current notions of nuclear deterrents, primary attacks and limited nuclear conflicts remind me of Procrustes, the bandit who tied victims to a bed and forced them to fit by stretching the small ones to the size of the frame and lopping off the heads and limbs of those who were too large. We must not condone tying billions of members of the human race to a Procrustean bed of misguided nuclear policy.

Linus Pauling: I agree that fundamental human nature is the key. But, as Benjamin Franklin said when he observed improvements taking place in the physical sciences, “Oh that moral science were in as fair a way of improvement.” Bertrand Russell hit on the same point when he said, “If people would only work as hard to make themselves happy as they now work to make other people unhappy, the world would be a wonderful place.” …

Ikeda: I have repeatedly said that, although the consumer-oriented society and extravagant reliance on disposable goods and consequent depletion of natural resources are certainly major woes, cutting military expenses is the surest way to make maximum reduction in wasteful expenditures. As authorities in the field point out, no business could survive the kind of spendthrift luxury represented by a full-scale arms race. President Gorbachev must have seen this at an early stage in his career. …

Nationalism may be pinpointed as a major obstacle on the road to the creation of a new global order. Although it sometimes inspires domestic progress, in extreme, unbridled forms, patriotism can stimulate international antagonism. How would you define optimum patriotism?

Pauling: In this respect, perhaps the principles set forth in the United States Constitution and Bill of Rights—especially the Bill of Rights—should be our guides. Patriotism can work positively for progress but can also be a negative force.

In 1961, having become increasingly concerned about the spread of nuclear arms, my wife and I compiled and submitted to the United Nations “An Appeal to Stop the Spread of Nuclear Weapons.” It was signed by about 200,000 people from 45 countries. Later we decided to invite scientists and scholars to a conference on the same topic. The conference was held between May 2 and 7, 1961, in Oslo, Norway. Among the material on this conference published in Appendix 5 in No More War!, occurs a remarkable statement:

Restriction of loyalty to within national boundaries is obsolete and loyalty to the whole of mankind is now a necessity. Individuals must bear personal responsibility for acts contrary to the interests of mankind.

Ikeda: This is certainly true. We must become aware of ourselves as citizens of the whole world. …

In my travels around the globe, I have come to see that ordinary people can be surprisingly cosmopolitan in their views. Fear and anger, however, sometimes upset cosmopolitan equilibrium. We must be on our guard against allowing ourselves to be engulfed in emotional reactions and must strive to discern dispassionately and accurately between true pacifism and concealed belligerence. Granted the process may take time. But without doubt, educating knowledgeable and calm-thinking people to avoid obsession with the apparent advantage of the moment is the way to progress toward peace.

Notable Achievements
• American theoretical physical chemist.
• Only person to have won two unshared Nobel Prizes.
• In 1954, awarded the Nobel Prize in chemistry.
• In 1962, awarded the Nobel Peace Prize for his efforts toward the abolition of nuclear weapons.
• Has received more than 30 honorary doctorates from universities around the world.
• Authored works including The Nature of the Chemical Bond, and the Structure of Molecules and Crystals and No More War!