Ikeda Sensei has had dialogues with leading figures throughout the world to strengthen and advance the path to peace. To date, more than 80 of his dialogues have been published in book form. This new series highlights one dialogue a month.

The following excerpts are from Walking With the Mahatma, a dialogue between Daisaku Ikeda and Neelakanta Radhakrishnan, the chairman of the Indian Council of Gandhian Studies and distinguished peace activist and educator.da.

Gandhi strove for a reform of the heart 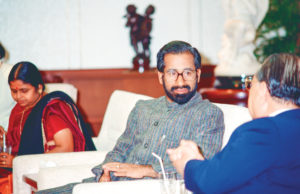 Neelakanta Radhakrishnan: Although people tend to think of it as purely political, the essential goal of Gandhi’s movement was a human revolution, a reformation of the human being from within.

Two factors made it successful: first, it was a philosophy anyone could put into practice; second, it was based on putting that philosophy into practice oneself and then recommending it to others. Today, the SGI movement, centered on you, conducts a global nonviolent popular movement founded on the same two factors.

Your human revolution constitutes a new wave and focus to non-violent movements. In a world where the threat of violence spreads, it shines the light of hope on the 21st century. The human revolution you are leading has very sound ethical, spiritual and moral dimensions.

Daisaku Ikeda: Thank you for your extremely profound understanding.

Violence can never produce true or enduring social reform. Change through violent means breeds increased hatred and violence; bloody revolution invariably invites further bloodshed. Vengeance calls out for vengeance. We can see all too many examples of this in human history. That is why Gandhi consistently advocated for nonviolence as the means to transform India.

In other words, he was not thinking in terms of a change from one ruling class to another, but the achievement of the true autonomy of the people by making them strong and wise. He thought it would be meaningless to replace the control of the British with control by an Indian elite.

Speaking of his method for creating change, he said: “I am trying to work from the bottom upward.”[2]

Stirring a groundswell for change, not from the top down, but from the bottom upward—this is the formula for nonviolent revolution. (pp. 82–84)

The starting point of religion for the sake of humanity

I believe that religion’s true mission is to be the source of the strength to inspire people to stand up in their daily lives, to open the way to happiness for all and to transform society. Any religion that isolates itself from real life in society and loses sight of human needs has no reason to exist.

Gandhi once wrote of God, “If I could persuade myself that I should find Him in a Himalayan cave, I would proceed there immediately. But I know that I cannot find Him apart from humanity.”[3]

The noblest worth of life is to be found in living and acting with our fellow human beings for the sake of people’s happiness.

This is true in the case not only of religion, but also of politics, economics, learning and the arts as well. When this perspective is lost, all is reduced to empty theorizing, the starting point for frivolous intellectual gamesmanship and ethical corruption.

Radhakrishnan: As we have said, religion was the source of the spirit and deeds of Gandhi and Martin Luther King, Jr., two outstanding men of action. Both of them repeatedly said that they drew their spiritual strength from their faith. It is important to remember in this context that their faith was not conformist or restrictive. It was religion, not for clergy, but for humanity.

They realized the immediate need for corrective measures to make religion a vibrant source of power against conventional ideas and customs that became oppressive in the hands of those who literally hijack religion and keep it as their preserve. Instead of being obsessed with conventions in traditional religion, Gandhi and King returned to the fundamental spirit that is the goal of religion. In doing so, they empowered the people. (pp. 148–49)

I believe that religion’s true mission is to be the source of the strength to inspire people to stand up in their daily lives, to open the way to happiness for all and to transform society.

• Chairman of the Indian Council of Gandhian Studies.

• Authored over 40 books in multiple languages. 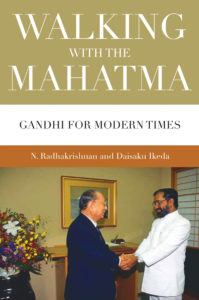 Excerpts From Nichiren’s Writings in Volume 26

The Heart of Appreciation