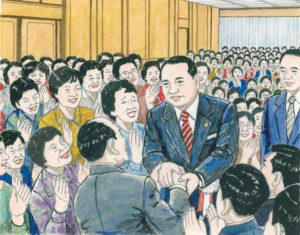 Members living on various islands throughout Japan resolutely carried out their efforts for kosen-rufu despite having to contend with abuse and criticism from those unfamiliar with Nichiren Buddhism.

More than four years after its establishment, the outlying islands headquarters held its first general meeting on October 7. Shin’ichi heartily praised the members, who often carried out a solitary struggle on their respective islands, and thanked them for traveling such long distances to participate in this meeting. He urged each of them to become like the sun, an indispensable part of their communities.

The members from the outlying islands used this general meeting to refresh their resolve. In solidifying their vow for kosen-rufu, they no longer saw their island as being a remote location; they now saw their island as the grand stage for realizing their eternal mission, as an island of happiness and an island of victory. This raised the curtain on a new chapter in the story of these outlying islands. 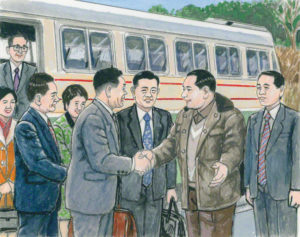 In Praise of the Champions on the Outlying Islands

The “Islands of Victory” chapter includes a summary of the history of the kosen-rufu movement in the outlying islands of the Japanese archipelago. The first representative leaders conference of the outlying islands headquarters was held at the Kyushu General Training Center in Kagoshima Prefecture in January 1974.

[Speaking to those in charge of the meeting the day before it was to take place,] Shin’ichi Yamamoto said: “As I’ll be making preparations for my departure to Hong Kong the day after tomorrow, I won’t be able to attend tomorrow’s leaders conference. However, I would like to welcome the members as they arrive as well as see them off when they return. They are noble children of the Buddha who have striven hard for kosen-rufu on their islands, despite being shunned by their communities and enduring all sorts of persecution.” …

The next day, a piercingly cold wind was blowing through the Kyushu General Training Center located midway up the Kirishima mountain range. Slightly before 11 a.m., the bus carrying participants of the first Outlying Islands Representatives Conference arrived. As the members stepped down from the bus, a smiling Shin’ichi was waiting there to greet them.

“A hearty welcome to the great champions of kosen-rufu! Thank you for traveling all this way to get here! I offer my sincere praise to you all!”

Shin’ichi reached out to shake their hands. The members responded with firm handshakes in return. Feeling his tremendous warmth, their eyes welled up with tears. Though few words were spoken, they felt Shin’ichi’s heart and the pulse of his spirit. Courage rose up in their hearts. …

Once the conference had ended, Shin’ichi was waiting outside to see them off. As the members boarded the bus, he earnestly called out to them, seeking to encourage them to the core: “I am counting on each of you to care for your island. Kosen-rufu will advance in proportion to your efforts and how much you speak to others about Buddhism.

“I will be chanting earnestly for your health, your success in every endeavor and the prosperity of your islands. I will send daimoku morning and evening. Our hearts will always be as one. I will steadfastly watch over all of you.

“With a deep commitment to care for and protect all your fellow islanders, please advance harmoniously, exercising good judgment and with your hearts wide open. Become towering trees of trust as you embrace all the people of your islands!”

The deepening of your faith will manifest as your humanity, in your concrete actions and in your words brimming with care and consideration for others.

Excerpts From Nichiren’s Writings in Volume 28