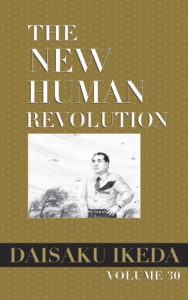 The long-anticipated printing of volume 30 of The New Human Revolution is coming soon. In early September, the e-book version will be available at online bookstores, including amazon.com, for $11.99. The print version is expected to be sold later the same month for $18.00 at bookstore.sgi-usa.org.

Ikeda Sensei completed the 30th and final volume of his epic novelized history of the Soka Gakkai and the SGI on Aug. 6, 2018, at the Nagano Training Center in Karuizawa, Japan, the place where he had begun writing the novel 25 years earlier to the day.

SGI Vice President Hiromasa Ikeda writes of the series’ significance: “As time goes by, the number of people who have firsthand knowledge of the events depicted in the novel will become smaller and smaller. Their testimonies are invaluable, but it is even more important that, through The New Human Revolution, the history of kosen-rufu and the Soka Gakkai spirit are transmitted, together with Sensei’s heart, eternally from generation to generation” (January 2019 Living Buddhism, p. 36).

The ‘Place of Practice’ Is Right Where We Are