The following excerpts are from The Art of True Relations (pp. 159–64), a dialogue between Daisaku Ikeda and Sarah Wider, a professor of English and Women’s Studies at Colgate University in Hamilton, New York.

Education Rooted in Respect and Appreciation 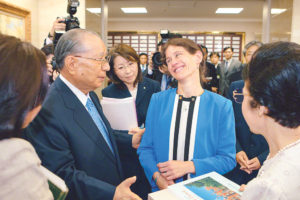 Sarah Wider: So often students have learned during their schooling to repeat a well-received interpretation or to say what they think the teacher wants to hear. I want my students to think freely and fully, to examine carefully what they have come to think and how they have arrived at their ideas and understandings. I believe there is nothing more important than mutual and compassionate respect between teacher and student.

I bring in the word compassionate, because respect can also be associated with fear or with dispassion. Both stand in the way of true learning. If we fear our teachers, there is a great danger that we will seek to mimic them rather than develop our own creative intellect. If we feel we must maintain an objectivity that distances people from one another, we are likely to treat learning as no more than a mind game, in which the outcome doesn’t matter.

Daisaku Ikeda: Buddhism stresses the importance of true dialogue as a meeting of minds, presenting its teachings in the form of dialogues between a mentor and disciple. And you emphasize the importance of consideration and respect in dialogue.

These are values consonant with the four methods employed by bodhisattvas in Mahayana Buddhism. These four methods are qualities conducive to creating ideal interpersonal relations. The first is selfless almsgiving, including spiritual nourishment, courage and other nonmaterial support. The second is loving speech, or speaking in a kindly manner. The third is altruistic action, taking action to benefit others. And the fourth is shared efforts—working together with others. …

Wider: In class, I begin from the premise of respect. How can we learn if we don’t treat one another with dignity and interest? We each and all deserve respect for our insights, our concerns and our questions. Every stage of life holds its own distinct perspectives, and wherever life finds us, we are wise if we remember to listen. …

Ikeda: Such an attitude was pivotal to Emerson’s educational philosophy. He wrote, “But they [universities] can only highly serve us when they aim not to drill, but to create; when they gather from far every ray of various genius to their hospitable halls, and by the concentrated fires, set the hearts of their youth on flame.”1 Emerson believed that the aim of education is to build character and to help young people manifest their full potential. Convinced that universities should gather and protect all kinds of genius, he vigorously opposed any teaching that forced young people into established molds or constrained and repressed them. He believed the ideal teacher to be one who, through conversation and interaction, sets the hearts of youth on fire.

Nichiren, quoting the classical Chinese work Xunzi, used the expression, “From the indigo, an even deeper blue.”2 While the blue dye comes from indigo, when something is repeatedly dyed in it, the color becomes deeper than that of the indigo plant. This expresses the need for the teacher to strive to educate their students to surpass them and the concomitant need of the students to respond to their teacher’s dedication by striving their hardest as well. It bespeaks a true unity of teacher and student in the learning process. This is very similar to Emerson’s views and, indeed, should be a universal guidepost for education. …

The mission and responsibility of teachers are to believe firmly in the potential of each student and to exert themselves to the utmost to make each student surpass them.

The other quality is appreciation. True appreciation is a rare gem, though it may lie unpolished within us. It is certainly not to be confused with praise or approval; it stems from deep consideration. …

Appreciation requires us to speak with measured and forthright detail about people, their work, who they are, and what they do. It creates circumstances in which people not only learn more readily but also are more willing to take risks in their intellectual growth.

Ikeda: Both presidents Makiguchi and Toda were model practitioners of the three points you mention: respect, encouragement and appreciation. This deep commitment to compassion and action are the starting points of Soka education and the pedagogic ideal for which we strive.

The mission and responsibility of teachers are to believe firmly in the potential of each student and to exert themselves to the utmost to make each student surpass them.

• Author of a number of publications on American literature such as The Critical Reception of Emerson: Unsettling All Things and Anna Tilden, Unitarian Culture and the Problem of Self-Representation.

Excerpts From Nichiren’s Writings in Volume 30

Analogy of Potatoes Rubbing Against One Another