The following excerpts are from Reflections on the Global Civilization (pp. 162–63), a dialogue between Daisaku Ikeda and Majid Tehranian, a Muslim scholar in international communication and former director of the Toda Institute for Global Peace and Policy Research. 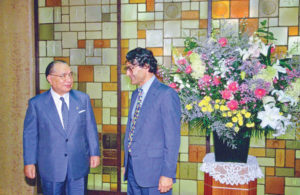 Daisaku Ikeda: The fount of human happiness can never be found in segregation and division.

We see a growing tendency for intensifying feelings of group identity, partly as a reaction to the anxiety resulting from a sense of a lack of individual identity. The mental friction of ethnic identity is in many cases little more than an artificial construct of the modern era.

In The Religion of Man, the Indian poet [Rabindranath] Tagore provided a splendid explanation in analyzing the crux of the problem of ethnicity, old and new:

Our great prophets in all ages did truly realize in themselves the freedom of the soul in their consciousness of the spiritual kinship of man which is universal. And yet human races, owing to their external geographical condition, developed in their individual isolation a mentality that is obnoxiously selfish.[1]

Majid Tehranian: The twentieth century has been trampled upon by the divisive energies of such products of falsehoods as tribalism, ethnocentrism and nationalism.

Ikeda: It is a truly insidious problem. Once such racial and ethnic stereotypes are fixed in the mind, they are exceedingly hard to erase. All too often they act as a trigger, igniting some otherwise unremarkable dispute into a full-blown conflict.

Tehranian: We are all now faced with the choice to stay narrow and parochial in our identities and loyalties or broaden our scope to embrace the rest of the world. …

If we wish to live in a more peaceful world, we have no other alternative but to accept that we all belong to a complex variety of communities, identities and loyalties.

Through dialogue, gaining a profound mutual understanding, we need to negotiate with others and ourselves an identity and citizenship that is inclusive rather than exclusive. Beyond space and time we also belong to the world of the spirit. We’d be happier if we could transcend our own bounded self to partake in the cosmic self.

Ikeda: In his A Geography of Human Life, Tsunesaburo Makiguchi argued that every individual requires three different types of self-awareness: a local awareness, of being rooted in one’s own community; a national awareness, as belonging to a nation; and an awareness of being a citizen of the world.

In other words, by retaining a strong foothold in our awareness as members of a local community and citizens of the world to avoid being swept away by the evils of nationalism, we can deepen mutual understanding as good neighbors and good world citizens at the level of both the community and international society and enjoy shared prosperity.

Tehranian: That’s a wonderful insight, a very prescient viewpoint that resonates closely with the idea of global citizenship that has been advocated in recent years.

An important feature of Makiguchi’s idea is his insistence on creating a multilevel identity rather than a single one, thus remaining open to both the community and the world.

Ikeda: As you pointed out, with the accelerating pace of interdependence, it is increasingly important for each individual to awaken to his or her relationship to humanity as a whole.

But thinking only in terms of world citizenship can leave one feeling rootless and vulnerable. The French philosopher [Simone] Weil wrote convincingly about the need for “roots” in life. The best way is to firmly embed the “roots” of one’s identity without losing the open spirit of a global citizen.

• First Director of the Toda Institute for Global Peace and Policy Research, founded by Daisaku Ikeda in 1996.

• Joined the World Academy of Arts and Sciences as a Fellow.

• Was a member of the Club of Rome.

Excerpts From Nichiren’s Writings in Volume 29

Analogy of the Garden Hose