Ikeda Sensei has had dialogues with leading figures throughout the world to advance peace. To date, more than 80 of his dialogues have been published in book form. This series highlights one dialogue a month. The following excerpts are from Reaching Beyond (pp. 200–04), Daisaku Ikeda’s discussion with Jazz icons Herbie Hancock and Wayne Shorter. 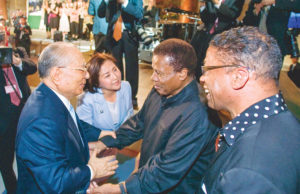 Herbie Hancock: I firmly believe that anyone who wants to become a great artist must live with the utmost passion and enthusiasm. Naturally, an artist’s tools and techniques are also necessary, as are practice and training. But as a musician, I feel that above and beyond the music itself, it is especially important to develop one’s humanity.

Daisaku Ikeda: Whether an artist or not, each of us can create infinite, unhindered beauty. People who, while enduring and overcoming hardship, dedicate themselves to others create a noble hymn to humanity, a beautiful painting of an indestructible life that they can leave behind. As you said, this is woven through one’s interactions with others.

According to a Buddhist scripture, Queen Shrimala, a follower of Shakyamuni, made a vow to nurture the goodness in other living beings. She vowed to carry out four practices: 1) encouraging others by addressing them with kindness and concern through dialogue; 2) giving alms, or providing people with the things they require; 3) taking action on behalf of others; and 4) joining with others and working together with them (A New Humanism: The University Addresses of Daisaku Ikeda, p. 56). These are apt descriptions of the spirit behind the musical activities you two have continuously pursued for the sake of the people and for peace around the world.

Wayne Shorter: I have to mention Billie Holiday, who sang about human dignity and played an important role in the jazz of the first half of the twentieth century. She introduced innovative techniques to jazz, depicting her life journey and struggles in the songs she sang. She may have had many struggles, but she left a musical legacy of many inspiring songs of courage.

Hancock: Billie Holiday sang in a way that feels like an arrow flying straight into your heart. She had a tough life. You can tell because each song touches the core of your humanity. She had a genius for capturing the essence of a song and its meaning, and she delivered it in an unbelievably powerful way, as if she was telling you, “I understand your pain.” The singers she has influenced are too numerous to mention. …

Before I embraced the faith of Nichiren Buddhism, I didn’t realize what it was that I was fighting for. It was as though I was in a deep sleep. Now I feel that I am awake—far more aware than before. I still have a long way to go, but I’m not afraid anymore. I have the confidence to shoot for bigger and bigger dreams, and I’m not afraid to be proactive and assertive, and move forward in my life.

This is the motto that I try to live by: “Have the confidence and determination to live life freely and without fear.”

Shorter: My motto is “Never Give Up!” It’s a motto that always stays fresh and never fades. Though I am at the beginning of my spiritual journey, I am committed to pursuing ever greater challenges empowered by the spirit of the Buddhism of the true cause.

Ikeda: The love of music transcends nationality and race. When we listen to music, we are all just human beings. Before we are Japanese or American, we are people. Music brings people back to this shared starting point.

As I mentioned earlier, a century ago, Mr. Makiguchi, who died for his beliefs, had envisioned a path of magnificent progress for humankind—a great shift from military, political, and economic competition to humanitarian competition. The power of music, the power of culture, the power of education—these impart hope to humanity and are major forces for achieving the shift. At this moment in history, we need a music that revives the human spirit. We need a hymn to the human spirit that will inspire and energize people.

• Mr. Hancock was a member of The Second Great Quintet of Miles Davis.

• He is well-known for his innovative fusions of jazz with funk and electronic music, starting with his groundbreaking “Head Hunters” album.

• In 2008, he became the second jazz musician to win a Grammy Award for Album of the Year.

• He has served as a professor at the University of California, Los Angeles Herb Alpert School of Music.

• He is also chairman of the Herbie Hancock Institute of Jazz.

• He has been practicing Buddhism with the SGI since 1972.

• Mr. Shorter was a member of The Second Great Quintet of Miles Davis.

• He served as the primary composer for Art Blakey’s Jazz Messengers.

• He has won 11 Grammy Awards, and has been cited by The New York Times as “probably jazz’s greatest living small-group composer.”

• He recently debuted his first opera, Iphigenia, at the Kennedy Center in Washington, D.C.

• He has been practicing Buddhism with the SGI since 1973.