Living Buddhism: Steve, thank you for speaking with us. We’re interested in learning about how your Buddhist practice has helped you develop a successful and fulfilling career. Where should we start? 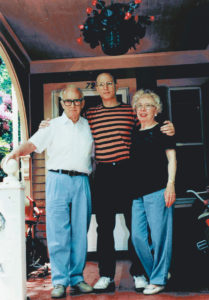 Steve and his parents in Newton, Massachusetts. Photo courtesy of Steve Saperstein.

Steve Saperstein: How about New York’s bustling Penn Station. I was 24 and on my way home to New Jersey after returning from a year of backpacking in Europe. I felt spiritually bankrupt and didn’t know what to do next. I felt stuck having to go home to my parents with no plan, so I asked a stranger where I should live. Without taking a breath, she said, “Boston’s a great city.” I immediately hopped on a train to Boston with 80 dollars in my pocket, and this has been my home for 48 years.

How did you begin practicing Buddhism?

Steve: About a week after moving to Boston, I was on my way to see a movie when a 17-year-old tapped me on the shoulder and asked, “Do you want to go to a Buddhist meeting?” He seemed like a nice kid, so I decided to go. I was skeptical about whether chanting Nam-myoho-renge-kyo would actually work for me, but I had nothing to lose and started chanting, hoping to find direction in life.

How would you describe your first days of chanting? 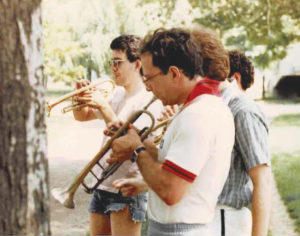 Steve: At first, I wasn’t fully committed but gave it an honest try. My real journey began about a month later when I was visiting my parents. I had to decide whether to chant in their home. I got up Saturday morning and did gongyo. When I finished, I could tell they heard me, because the tension was palpable. I came out of the room, and my dad stood there and asked, “What are you doing?”

“Trying this Buddhist stuff,” I said.

“What, your own religion’s not good enough?” he shot back.

Before I went back to Boston, I left an issue of the World Tribune where I knew my dad would see it. Two weeks later, my mother called.

“Your father wants to talk to you,” she said.

I spoke to my mother pretty often, but not my dad. Uh oh, what happened? I thought.

He said, “Are you still with that Ikeda guy?”

He then told me, “Stick with Ikeda.”

This freed me up to dedicate myself to trying the practice 100%. It felt great to have my dad on board. I thought, If Ikeda Sensei could change my dad’s mentality in just a few words, this philosophy must be powerful. From that point, I started practicing hard.

How did you develop a career path? 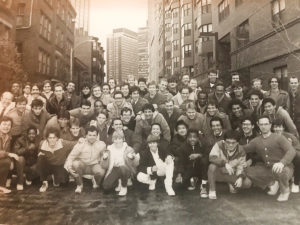 Steve: It took time. At first, I took a job hanging signs around town. Then, I worked as a school teacher, but I wasn’t really happy. After my three-year contract expired, I was offered a new contract. If I signed it, I was guaranteed employment, but knew I would be settling. If I didn’t, where would I find a new job? Looking back, I lacked confidence in my ability to get a job that I loved.

I took my dilemma to the Gohonzon. I decided that I would chant until I found the answer within my life to make the best decision. I had never chanted with such intensity. As I did so, I saw myself as a boy trading baseball cards. A pure joy that I hadn’t experienced in decades washed over me. A lightbulb went off. I decided to go into business.

Steve: I had no experience in business. But during that chanting session, I made a firm determination to be a successful businessman. For me, my victory was winning over my lack of confidence. Soon after, my mother called saying that she met someone who was looking for a young person in Boston to help with their packaging business. Forty-four years later, I’m still with the same company, and I haven’t had one day where I haven’t loved my job. All this, from one intense chanting session.

In these 44 years, we have grown from a small regional operation to an international company with offices in the U.S., Europe and Asia. I truly feel that while I can’t take credit for our development, I know that I have contributed, and the qualities I learned from my Buddhist practice helped me become that person.

I learned that a major key to success is to fight to the end, to never give up.

Can you speak a little more about the qualities you have applied to work?

Steve: I learned three lessons in the early years of my practice that empowered me to develop a solid foundation for my personal life and career.

First, by doing gongyo twice a day, I developed confidence in myself and sensitivity toward the sufferings of others. This combination allowed me to empathize with others, while having a strong spiritual backbone.

Second, in 1981, I visited Japan for an SGI training course. I had been in business for a few years. I was doing OK but felt there was something missing. I was so impressed by the generosity of Sensei and local Soka Gakkai members. Everywhere we went, we received gifts, and we were treated like royalty. On the plane home I reflected on the profound sincerity I had just experienced and said to myself, I’m going to stop being a taker and start being a giver. I decided to give 100,000 times more than I take.

Third, through studying Sensei’s writings and engaging in SGI activities, I learned the spirit to never give up. I remember staying up late, fighting to the bitter end in campaigns to introduce Buddhism and expand World Tribune subscribers. I never had experienced this intense determination to achieve a goal. And it had a direct impact on my business. I learned that a major key to success is to fight to the end, to never give up.

Can you share a turning point in your career? 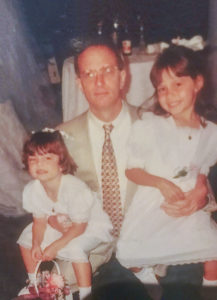 Steve and his two daughters, (l–r) Olivia and Lisa, in 1992. Photo courtesy of Steve Saperstein.

Steve: One major turning point came when we morphed into a company that not only provided packaging but also branched out into manufacturing. In the SGI, I learned to encourage people, introduce friends to Buddhism and develop relationships based on compassion, which taught me how to create strong trust with my clients.

For example, one of my clients needed to transport blood for medical procedures, but they couldn’t find a company that made devices to keep the blood at the right temperature. Then, out of the blue, they asked me if I could help them manufacture this product. I immediately said, “Yes, I’ll do it!” even though I had no connections to manufacturing companies. I learned this spirit to take on any challenge in the SGI.

Steve: The first thing I did was chant with the intensity to create something from nothing. I remembered Nichiren Daishonin’s words to his disciple Shijo Kingo, saying that he would “pray as earnestly as though to produce fire from damp wood, or to obtain water from parched ground.”[1] Then, I looked through the Thomas Register, a phone book for manufacturing companies. I called company after company and hit dead-end after dead-end. But I never gave up and continued searching until the bitter end. I chanted and narrowed down my list of potentials. In the end, I found a company that could make the components necessary to transport the blood at the right temperature. This was my biggest contract, and our company went from just packaging to manufacturing and packaging, which generated lasting growth.

How did you balance SGI activities with work and family responsibilities? 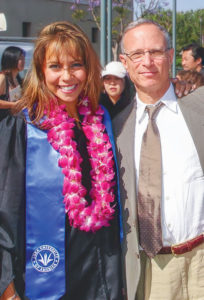 Olivia and Lisa, in 1992. Steve with Lisa at her graduation from Soka University of America, May 2007. Photo courtesy of Steve Saperstein.

Steve: It comes down to discipline. I had a demanding job, a wonderful family with two beautiful daughters and leadership responsibility in the SGI. I had to chant at least one hour every morning to have the wisdom to plan out my day and the energy to fully focus on what was in front of me. I made sure to finish my work by 6 p.m. Then, I would put everything into my SGI activities and family.

The SGI is like a school of self-development. We learn how to live with a great purpose: kosen-rufu; we learn how to never give up on others: compassion; we learn to take up the challenge in front of us and not retreat: courage; and we learn to take our problems to the Gohonzon and figure out the best path forward: wisdom. So, for me, the SGI is where I developed the qualities to win in all aspects of my life. I went from a lost, timid young man to a confident and fulfilled person. By dedicating myself to kosen-rufu, I have made the greatest investment in myself.

The SGI’s long-standing spirit is to place youth at the forefront of every endeavor. How have you applied this ethos to your workplace?

Steve: I chant for every young person I meet, SGI member or not. I just want them to develop the confidence in themselves that I’ve experienced through my Buddhist practice. One passage that I’ve striven to apply when encouraging others is from Sensei’s 2004 peace proposal:

Buddhist tradition holds that Shakyamuni’s decision to seek the truth was motivated by his confrontation with the reality of human suffering—the “four sufferings” of birth, aging, sickness and death, which are intrinsic to human existence. For Shakyamuni this meant not only the direct impact of these sufferings on people’s lives but … the deep-rooted indifference, arrogance and discriminatory consciousness that prevent us from feeling others’ pain as our own.[2] 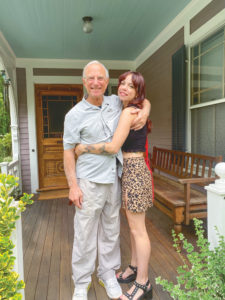 Based on this, I chant to share the struggles of young people and provide them with hope that they can definitely become happy.

One day, a young man in my office approached me and said: “Snapper, I noticed when everyone is stressed you seem to be calm. Does that have anything to do with Buddhism?” I usually don’t talk about Buddhism at work, but because he asked, I made an exception. He was so talented but was suffering from stress. Professionally, he would have done well regardless of practicing. He decided to begin chanting and received the Gohonzon. He said that the practice helped him lower his stress and give his all in the moment. He’s developed confidence and is now one of the top earners in the company. He’s also winning at home as a loving father and husband.

What a wonderful story! What are some of your goals toward the future?

Steve: I’m still working for my company in a consulting role, and I take advantage of a flexible schedule to do as many SGI activities as I want. Now, my almost sole focus is fostering youthful successors in the SGI. Whenever I think about how hard the three founding Soka Gakkai presidents worked to develop this movement, all I want is to make sure it continues growing into the future.

By dedicating myself to kosen-rufu, I have made the greatest investment in myself.

I Was Born to Win

Digging to the Bedrock