Shortly after she discovered the extramarital affair I was having, my wife showed up to our house with these people, these Buddhists, in tow. They would be doing some chanting; did I want to join them?

“What?” I nearly shouted.

We were Catholic—Filipino Catholic. Now, overnight, my wife was Buddhist—Big Tummy Guy Buddhist? This had to be some kind of sin. “No!” I barked. “I don’t want to be a… a Buddhist!”

But I wasn’t in any position to tell my wife what to be. Our home—or rather, our Bronx apartment—had recently become a hell of arguments and tears.

Moving to New York had been a big change for all of us. We knew practically no one in the big city, but under circumstances beyond our control, had unexpectedly lost our Los Angeles family home, which was everything we had, the year before, in 1998. Everything that I thought I had secured for my boys—a safe neighborhood, a good school, a nice home—was dust in the wind.

We moved to New York because I thought the hurt I felt in LA might just stay put in LA. I know now what I didn’t then—that you can’t run away from karma. I arrived in New York as angry as I had left LA: ready to explode.

The internet was a new thing in 1999. For a person seeking an outlet, it offered surprising comforts. I love to sing and discovered to my delight an online Filipino-language karaoke group. It was with one of the regulars, a woman with a beautiful voice, that I struck up the long-distance relationship that would drive my wife to Buddhism. It became serious, and soon I was discussing plans of leaving my family.

Angelina, my wife, is a smart woman. She found out within the year, and the apartment became a place nobody wanted to be in. Rather than watch us fight, my eldest son spent as many nights as possible at the homes of his friends. Sometimes, at home, he would chant with his mother, tears on his face. I never joined them.

Maybe this sounds un-Buddhist, but when my wife encountered the practice, her prayer was to banish me from her life—if not from the face of the earth! Yet she must have felt something while chanting that she wanted me to feel, too, because within a few months, she tricked me into attending a kosen-rufu gongyo meeting. “Just drop us off,” she said. And then, “Just find a parking spot and come inside—just to the lobby!” And then I’m being heckled up the stairs from behind, toward this rumbling. I sat in the back of this large meeting room, looking around.

Casually, I snuck out, then bounded downstairs. But my wife was right behind me, dragging me up those stairs a second time, cursing me all the way to the front of the room. Sitting in front of the Gohonzon, right in the center of the rumble, this Nam-myoho-renge-kyo—I remember thinking: What? But when it was all over, a man gave some closing words, discussing the concept of karma. Listening, I thought: Wait a minute… This makes sense! My problems, according to Buddhism, were the result of my own unique karma. They were my responsibility and mine alone to change. I could transform my circumstances, but that transformation had to begin within my own life.

The next morning I woke up before work, at 4 a.m., crept downstairs and opened up that altar my wife had brought home. I began chanting, slowly, slowly, to the Gohonzon. And I felt my body was warm, sweating. And I was reflecting, rewinding, all my stupidity, all the misery I’d caused my family. And my face was wet. I was crying.

Bewildered, I rushed upstairs and woke Angelina. “What’s happening to me?”

A tough question for 5 a.m.; she batted me off and went back to sleep.

To prevent this from becoming a regular thing, she started buying me books written by Ikeda Sensei. I came to understand what was happening: I was seeing my life clearly for the first time.

Yes, we had lost the house in LA, but this was an external, material thing. My own deep-seated selfishness, not the loss of our house, had caused my family’s unhappiness. If a happy home was possible, its foundation would have to be dug deep within my own life. Understanding this much, I dove headlong into SGI activities with my boys and began sharing Buddhism with others to the best of my ability. For the next six years, we welcomed members at the center every Sunday, doing Soka Group and men’s security side-by-side. Through a Filipino-language study group that we jump-started, my youngest son, Rainier, met Jenelyn, the woman he would marry. Jen chants powerful daimoku. It is no coincidence that their children are so unbelievably energetic.

Fast-forward 14 years, and we have become so strong as a family that we decided to purchase a house together. My wife and I moved in with them this month. This time, the foundation is deep; my appreciation for my wife, children, grandchildren, immense. Neither I nor this happy home is going anywhere. The important thing is to dig deep; to chant Nam-myoho-renge-kyo with a lion’s roar; to seek Sensei’s heart and build from there. 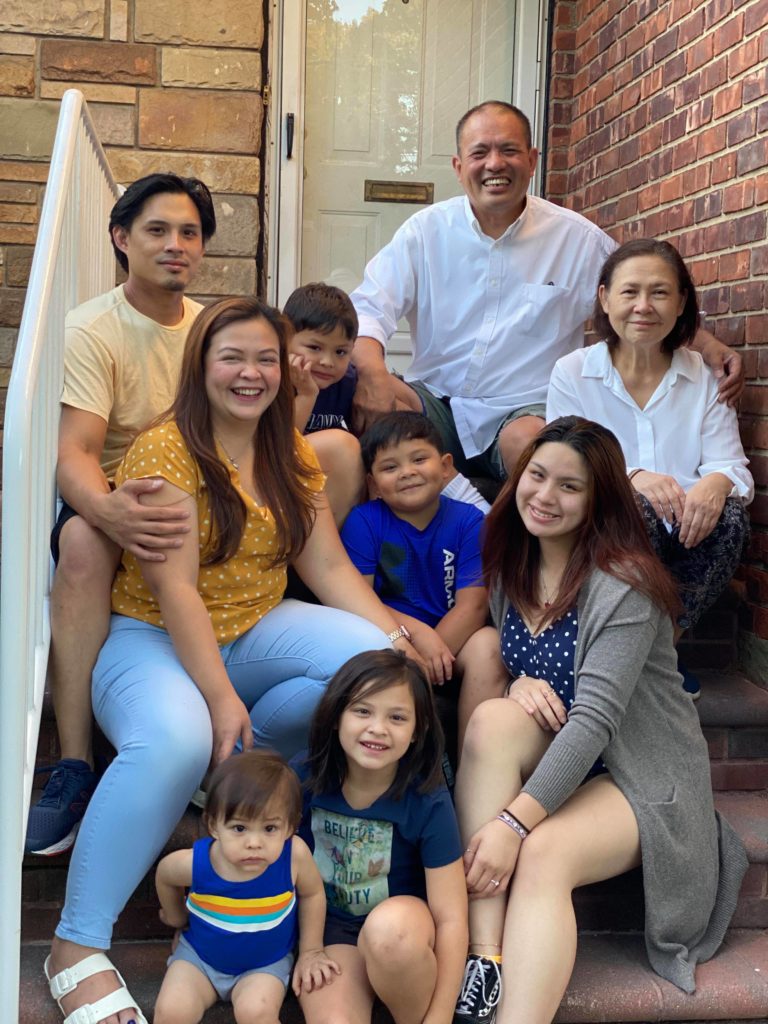 Rainer with his family in front of their new home in Long Island, N.Y., September 2021. Photo by Carolyn Obedencio.

The foundation—make it deep, make it deep; dig right down to the very bedrock.

Teaching My Grandchildren About Faith