“Yes, apartments and hotel rooms with a view of Central Park are extremely expensive,” a friend who lives in New York explained. Looking down on the park’s woods are the buildings of Fifth Avenue, a street of high-end homes and world-class shops and restaurants.

I was sitting on a bench, looking out at a pond reflecting the green trees. In the middle of Manhattan’s forest of skyscrapers spreads the 843-acre wooded public park, a precious retreat for New Yorkers. Once you enter Central Park, the bustle of the city disappears almost completely. From time to time, you can hear the distant sound of a plane passing overhead. Loudest are the voices of children playing, the sounds of peace.

I took a deep breath of the fresh morning air. It was a normal weekday morning, and not many people were in the park. A mother pushing a stroller, a jogger, someone walking a dog, an older couple holding hands, a student reading a book; a man in a business suit with his tie loosened.

It was June 12, 1996. I had just arrived the night before from Denver. Compared to the heat of that city, the weather in New York was quite comfortable.

In the quiet park, I wanted to spend some time thinking about things, including my address the following day at Columbia University. 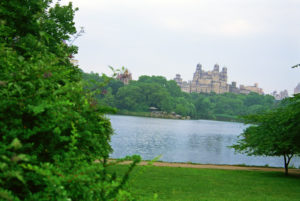 An expansive view of New York City’s Central Park, photographed by Ikeda Sensei during his visit in June 1996. Photo by Daisaku Ikeda

It had been 15 years since I last visited New York. Walking through town, I noticed that the streets seemed a little cleaner than before, but the vibrant energy of the city hadn’t changed.

A woman in business attire walked by at a hurried pace. She was wearing sneakers, and someone said she was probably carrying her heels for work in a paper bag. Another man in a suit was stuffing a hamburger into his mouth as he walked.

New York is like a boxing ring. Everyone is giving their all, scrapping for advantage. The difference between winning and losing can come down to a hair’s breadth.

Without real ability, you can’t compete. And if you lack the grit to get people to recognize your true strengths, you’ll fall behind. Even if you win, if you don’t keep winning, you’ll fail. The past means nothing. Even top executives, if they don’t produce, will quickly be fired.

You have to be tough to live here. And so you find people who have been thoroughly forged and strengthened by the city.

America’s real source of unstoppable strength is the capability of its people.

In New York, the city where everyone is constantly on the move, there are countless, unadorned human dramas.

A kaleidoscope of solitude, hope, love, jealousy, laughter, anguish, scheming, nurturing, maturing, pretention. Many are worn out, their hearts ailing. There is violence, melancholy, drunkenness, sorrow, contention; there is poverty, fraud, corruption, deceit and regret.

To relieve the tension and stress that comes from living amid such tumult, there is Central Park. Its greenery can revive even a heart that has been worn to dust. Embraced by nature, people become human again. To the soul, it is a verdant palace more splendid than a luxurious mansion.

Model sailboats of yellow and blue float on the pond. Many of these remote-control models are available for rent at the boathouse near the water. On the pond’s surface, everything is reflected upside down. What is high sinks the lowest, and what is low rises to the top.

What is reflected on the clear water of our hearts is sometimes the opposite of the image we project to the world. Beneath happiness based on arrogance we find suffering. And someone in unfortunate circumstances, if not defeated by them, can be happy.

What is true happiness? What is unhappiness? These things we can’t truly understand until the end of our lives.

It is not wealth. Nor is it status or position. It is whether one’s soul shines brilliantly with a grand ideal up until the very last moment.

Children were playing excitedly next to the Alice in Wonderland statue near the pond, and soon they began to gather near me. Children in the morning of their lives, freely scattering their sunshine.

“Do your best, all of you!” “Become successful examples of humanity! Become radiant people of broad capacity and big hearts!” These were my thoughts as I stood, leaned forward and greeted them.

A toddler walking on wobbly legs seemed about to fall. Of course, we all fell again and again at the beginning. But getting up each time, we learned to walk. If we consider that, then what is failing a mere 10 times in life? If we try a hundred times and still fail, then we should try a thousand times. And even if we fail a thousand times, we still must not give up. We may well succeed on the one thousand and first try.

Giving up is easy. Anyone can quit at any time. But instead, think again and again, suffer and struggle, do what you have to, with everything you’ve got, not sparing an iota of effort. Just do it. No matter how many times you fail, won’t the morning greet you again tomorrow? New York is the “try again” city.

Walking among the trees, I see a white bird spread its wings and launch itself into the air. Each of us has a rare bird within our hearts, a dream that is ours alone. We must let that bird take flight and soar into the vast sky. That is the motto of the state of New York: Excelsior!—Ever Upward!

This essay by Ikeda Sensei was originally published in the Sept. 26, 1999, issue of the Soka Gakkai’s daily newspaper, Seikyo Shimbun.