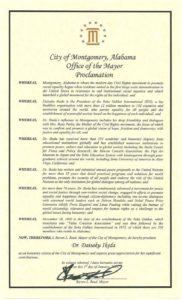 On New Year’s Day, the city of Montgomery saluted Ikeda Sensei’s 93rd birthday (Jan. 2 Japan time) declaring him an honorary citizen of Alabama’s capital. The proclamation, issued by Mayor Steven L. Reed, states that for over 70 years, Sensei has “continuously advanced a movement for peace and social justice through non-violent social change” while lifting “the banner of world citizenship, tolerance and respect for human rights as a challenge to the global issues facing humanity.”

Montgomery is home to the first large-scale nationwide protest against segregation, which launched in 1955, when Rosa Parks refused to give up her seat to a white man on a segregated bus.

The proclamation notes Sensei’s deep friendship with Mrs. Parks based on their shared global vision of “hope, freedom and democracy with justice and equality for all.” The peace activists and dialogue partners first met in 1993 in Los Angeles, then again in Tokyo the following year.

Sensei has shared that he accepts honors and accolades on behalf of the tireless efforts of SGI members around the globe. “Our SGI movement—a nonviolent movement of human revolution, or inner transformation—has tremendous significance,” he writes. “The world’s leading thinkers are aware of this. They have high hopes for our endeavors, as is clearly shown by the many honors I have received … around the globe as your representative” (Oct. 10, 2008, World Tribune, p. 5).