The following essay by Ikeda Sensei was originally published in the Dec. 25 issue of the Seikyo Shimbun, the Soka Gakkai’s daily newspaper.

I once presented this poem to an elderly pioneer member who was challenging himself valiantly in his personal life and society.

How dazzling, impressive and tenacious are the maple leaves blazing like fire on outstretched branches! Their very life force seems to be colored crimson—a life force invincible in the face of all vicissitudes.

When the leaves eventually fall, they enrich the soil, providing the energy for their and other trees to vigorously send out new leaves in spring and grow. The vivid red leaves themselves are a symbol of resounding victory, a celebration of the successful passing of the baton in the relay of life. 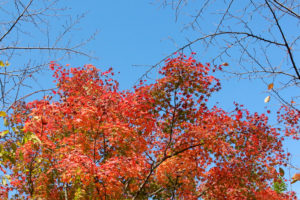 In fact, they remind me of the members of our Soka family who have bravely risen to the challenges of this trying year, their hearts aflame with an invincible spirit.

Our members around the globe are praying for the safety and well-being of family, friends and fellow members; reaching out to stay in touch and warmly encouraging them. They are taking action with wisdom, optimism and cheer, starting with doing what they can in their own capacities.

Everywhere, our members are showing actual proof of the principles that “faith equals daily life” and “Buddhism is manifested in society,” as they continue working steadfastly for the welfare of society and humanity, the happiness of their loved ones and others and a brighter future for our world.

All these efforts attest that they are genuine Bodhisattvas of the Earth.

I am absolutely convinced that the magnificent development of our network of global citizens, dedicated to the happiness of self and others, perfectly embodies the principle of bodhisattvas emerging from the earth in ever-growing numbers as articulated by Nichiren Daishonin (see “The True Aspect of All Phenomena,” The Writings of Nichiren Daishonin, vol. 1, p. 385).

I would like to reiterate my deep appreciation to all those striving tirelessly day and night as essential front-line workers, not least our members in the medical and nursing professions who are giving their all to save lives.

I am also profoundly grateful for the daily efforts of our uncrowned heroes who deliver the Seikyo Shimbun, the Soka Gakkai’s daily newspaper. Many thinking people are praising the Seikyo Shimbun and its sister publications around the world as a voice of hope and integrity in the midst of the COVID-19 pandemic.

My deepest thanks as well to the members of the young men’s Soka Group and Gajokai and the young women’s Byakuren Group for coming up with robust new protocols to keep members safe when attending gatherings at Soka Gakkai centers.[1]

The unseen dedicated efforts of all those who support our movement for kosen-rufu behind the scenes will be remembered by future generations as the true epitome of the Soka Gakkai spirit.

The curtain will soon rise on 2021, the Year of Hope and Victory, the start of the decisive decade leading up to the Soka Gakkai’s glorious centennial in 2030.

Soka is synonymous with infinite hope.

On his release from prison in July 1945, my mentor, second Soka Gakkai President Josei Toda, stood amid the charred ruins of wartime Japan. His mentor, first Soka Gakkai President Tsunesaburo Makiguchi, had died in prison. President Toda himself was in frail health and was burdened with huge business debts. The entire nation was sunk in despair, without a glimmer of hope anywhere to be seen. In that dark age, he resolved all alone that the time for kosen-rufu had come and set about rebuilding the Soka Gakkai.

My mentor said: “Nam-myoho-renge-kyo is the fundamental Law that is eternal and everlasting. It is the ultimate power of the universe and the unsurpassed way. Those who embrace it, believe in it and act in accord with it will never become unhappy. They are guaranteed to attain a life state of complete and perfect happiness.”

Mr. Toda summoned forth one youthful Bodhisattva of the Earth after another to join him in this movement of supreme hope.

I became his disciple at the age of 19, stood by him through the perilous years shortly thereafter when his business troubles threatened the organization’s very survival and opened the way for his inauguration as the second Soka Gakkai president on May 3, 1951, a shared victory of mentor and disciple.

As long as there is hope, there is always a way forward. A succession of hardships can be transformed into opportunities for great positive development. Faith in the Mystic Law is an inexhaustible wellspring of hope.

“It seemed impossible to me to leave this world before I had produced all that I felt capable of producing.”[2] These are the words of Beethoven, the renowned composer whose 250th birthday is celebrated this month. He wrote them at a time when he was gradually losing his hearing, a terrible blow for a musician.

Yet even after he lost his hearing entirely, Beethoven continued his creative life, composing numerous masterpieces, including the Ninth Symphony. In fact, had he not experienced this adversity, he might never have composed that work. It was his burning conviction to triumph spiritually over this hardship that made him the great composer that he is.

A person’s true worth is forged and revealed amid adversity. Nichiren writes, “Iron, when heated in the flames and pounded, becomes a fine sword” (“Letter from Sado,” WND-1, 303).

Beethoven felt deep love and appreciation for his “kind and lovable mother” all his life. After she died, he wrote: “Oh, who was happier than I when I could still utter the sweet name of mother! and it would be heard.”[3]

Beethoven’s gift to humanity, his “Ode to Joy,” is also inspired by his mother’s love.

Next year, 2021, we will celebrate the 70th anniversary of the women’s division, whose members are shining suns of hope. I feel that Beethoven’s “Ode to Joy” is also a fitting tribute for our noble mothers of kosen-rufu, who, even in the most difficult times, always have a smile and warmly embrace everyone.

This December on the 800th anniversary celebrations of the Daishonin’s birth, the planets Jupiter and Saturn came together to shine brightly, side by side, in the night sky. This is the closest they have been visible together in about eight centuries. The previous occurrence was in 1226, meaning that a 5-year-old Nichiren might have seen them.[4] How exciting that thought is!

I recall celebrating the Daishonin’s birthday with our members in Argentina, one of the farthest countries from Japan, 27 years ago, in February 1993. On that occasion, I shared the passage from Nichiren’s writings “When the sun rises in the eastern sector of the sky, then all the skies over the great continent of Jambudvipa in the south [the entire world] will be illuminated because of the vast light that the sun possesses” (“The Tripitaka Master Shan-wu-wei,” WND-1, 169). And I called on the members, “I hope that, with big hearts and a spirit as bright as the sun, you will spread the light of hope throughout Argentina and to all people.”

Today, our members not only in Argentina but throughout Latin America and across the globe are illuminating their societies with the brilliant rays of the Daishonin’s Buddhism of the Sun.

Argentine human rights activist Adolfo Pérez Esquivel sent a message to our members on the 90th anniversary of the Soka Gakkai’s founding (in November 2020). When “lost in the labyrinths of anguish, despair and suffering,” he said, if we summon our capacity to raise our eyes and look up, we will see hopeful new vistas before us. “Please, do not stop smiling at life,” he urged. “In the most difficult moments, we have to go on. We are always able to build a better world through the power of hope.”[5] Dr. Pérez Esquivel has praised Soka youth as the bearers of that hope.

Inspired by the online World Youth General Meeting (held on Sept. 27), members of the young men’s, young women’s and student divisions have been taking the lead in efforts to build a new age. Our future division members are also achieving wonderful growth.

Let us all fully support The New Human Revolution Generation Project that the youth division is initiating.[6]

In spite of the many challenges of this year, worldwide kosen-rufu is advancing steadily, with our young successors at the forefront. Value creation knows no bounds.

The Treatise on the Great Perfection of Wisdom[7] describes the fundamental spirit of bodhisattvas as follows: “They embrace a great vow, are unwavering in mind and ever diligent in practice. Because of these three elements, they are called bodhisattvas.”

The first element is the vow for kosen-rufu, the second is unwavering resolve and the third is brave and vigorous exertion. When we possess all three, we can activate the enormous power residing within us.

While in exile, the French author Victor Hugo (1802–85) called out to his compatriots: “In adversity we must cry out: Hope! Hope! And more hope!”[8]

Since Buddhism is a struggle to be victorious in life, let us set forth energetically with ever-greater confidence and pride, crying out: “Victory! Victory! And more victory!”—as we advance toward a new dawn and toward the summit of hope and victory of our vow from time without beginning.

Ikeda Sensei composed the following poems to celebrate the start of 2021. They were translated from the Jan. 1 issue of the Seikyo Shimbun, the Soka Gakkai’s daily newspaper.

Members of Soka,
lion’s roar resounding
in oneness with the Daishonin,
are elevating and guiding humanity
to the treasure land of peace.

As Bodhisattvas of the Earth,
we are spreading the brilliant light of
positive transformation
through the Mystic Law
to communities and countries everywhere.

The time is now.
I entrust everything to you,
my beloved disciples!
Triumph over all to build
a castle of youth, a castle of hope!

The Power of Positivity and Optimism