From Mentor to Disciple 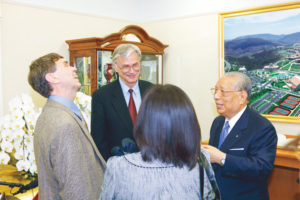 Jim Garrison: I have been interested in your thoughts on the mentor-disciple relationship, which I understand in terms of the teacher-student relationship of shared inquiry.

Daisaku Ikeda: The observation that the mentor-disciple relationship is one of shared inquiry is perceptive. Looking back in history, the mentor-disciple relationship between Socrates and Plato shines above all others as the model pedagogical bond. It is due to Plato that the essence of the philosophy of his teacher, Socrates, has been passed on to us today, nearly two-and-a-half millennia later.

Larry Hickman: In 1930, in a brief autobiographical essay, John Dewey wrote that Plato “still provides my favorite philosophic reading.”[1] What was it in Plato that he found so engaging? He tells us that he is captivated by the:

Dramatic, restless, cooperatively inquiring Plato of the Dialogues, trying one mode of attack after another to see what it might yield; … the Plato whose highest flight of metaphysics always terminated with a social and practical turn.[2]

This is surely the Plato who was so greatly inspired by his teacher, Socrates, whose own restless inquiries are still of great interest and value to us today. It is not, Dewey added, the Plato “constructed by unimaginative commentators who treat him as the original university professor.”[3]

Ikeda: Dewey deeply sympathized with Plato’s unflagging, sincere inquiry and vigorous search for truth. In the Second Epistle, Plato wrote the following: “There is not and will not be any written work of Plato’s own. What are now called his are the work of a Socrates grown young and beautiful.”[4] Scholars have long puzzled over this controversial passage, but the famous Japanese pedagogue Takeji Hayashi thinks that “Socrates grown young and beautiful” refers to the Socrates living within Plato.

In other words, the mentor continues to live forever within the life of the disciple. Countless examples throughout history, as well as my own experience, lead me to believe this to be true.

I am who I am today because of my mentor, Josei Toda. My thoughts and achievements would not exist if I had not benefited from his instruction. Even after his death, I constantly converse with the Josei Toda existing in my heart and can honestly say that I have depended on his guidance in overcoming all kinds of difficulties.

I am sure that, even after the execution of Socrates, Plato continued to engage in intense mental dialogue with him. The fruit of this exchange produced an immortal light of wisdom for humanity.

So it is that we find a wondrous conversation between mentor and disciple and an immortal transmission of their shared spirit in the origins of Western philosophy. The mentor-and-disciple relationship is the inexhaustible wellspring of learning and the light illuminating humanity’s future. …

Professor of philosophy of education at Virginia Tech University

• Former president of the Philosophy of Education Society and John Dewey Society.

• Wrote many publications on Dewey studies and the philosophy of education, including co-authoring Democracy and Education Reconsidered: Dewey After One Hundred Years.

• Received a number of distinguished awards including the Hiroshima Peace Award in 2018.

• Former director of the Center for Dewey Studies.

Passing Down My Treasures of the Heart

Faith That Grows Stronger Is the Key to Eternal Victory