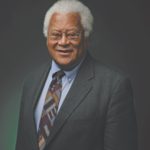 The following is an excerpt of the Rev. James Lawson’s keynote speech for Soka University of America’s Class of 2021 commencement ceremony, held virtually on May 28, 2021. The Rev. Lawson is the leading nonviolence theorist and tactician of the Civil Rights Movement. Visitwww.soka.eduto view his full speech.

Ernst Mayr, a very well-known biologist in the 20th century, in a speculative article, 60 years ago now, or more, talked about the flourishing earth where some 50 billion species, living species, have endured across the lifetime of the earth. He says that only one species has cultivated the intelligence to build civilizations and nations. I use that to remind myself and others.

Norman Cousins, one of my mentors who goes back to my high school days in the ’40s, said that each human being is a miracle of birth because the pregnancy and birth process means that each one of us has exceeded the 1 in 2 billion options to be birthed.

Jesus of Nazareth, my mentor for 75 or more years, said, “You are the salt of the earth. You are the light of the world.”

So my first thesis is this: You are a life singularity. By that I mean, your life holds within your genes and DNA, and all your cells, all of the potential that life offers us as human beings is sculptured in you, in me, in each of us. A life singularity. You are therefore a life force. The powers of life are there in each of us in singular and wonderful ways. Therefore, yes, you have the power and the life potential to become, and to become, and to become all the days of your life.

Soul force is about using the power of love to see your own life transformed and see the lives of other people transformed.

And it is to this that you are called. I urge you to discover the meaning of that life force that is in you, and exploit it because in exploiting it, you tap the most creative force of the universe, according to Mohandas K. Gandhi of India in the 20th century. …

Perhaps the greatest enemy to the human race today is the enemy of exploiting power as domination and control and violence. Violence is what hatred of other human beings is about. Soul force is about using the power of love to see your own life transformed and see the lives of other people transformed. …

Let your life with others create the world. We need the world more the truths of us seek. Finally, then I want to quote Nazim Hikmet, an Egyptian poet and literary person, now deceased, who some years ago in the 20th century was often in jails in Egypt because he wanted freedom and justice. He wanted a beloved community to emerge in Egypt. So he let his life be the continuous voice and a continuous witness for those visions.

We in the human family are moving toward a world we need and the world we want. Let your life be a life singularity and that with all imagination and power contributes not only to the inward outward journey of your own being at levels of imagination you never understood, but let your life also enable the human race to retrieve its most noble visions of life. May eternity watch over you as your journey continues.