The journey of mentor and disciple has been an evolutionary process for me. I wasn’t always willing to go down that path, but today I’m sure glad I did.

In 1995, I was struggling to keep up with a demanding workload while supporting my family. At this point, I had been distant from SGI-USA activities for around 10 years, and I knew I needed to make a change. My wife, Joan, encouraged me to read Ikeda Sensei’s novel The New Human Revolution to refresh my vow for kosen-rufu.

When I began reading volume 1, I felt a flood of emotions as I recalled the first time I saw Sensei interact with members.

It was the summer of 1969 in Japan. I was 20 and had started my practice just eight months earlier. I was still suspicious of the mentor-disciple relationship others spoke about, but my hesitation soon evaporated.

After a meeting on a blazingly hot and humid August day, Sensei arranged to serve us watermelon in an outdoor plaza. At one of the slicing tables, a tiny young woman was having great difficulty cutting the large fruit. Because of this hiccup, it was taking longer to serve the members standing in the hot sun.

Concerned, Sensei began speaking to the young woman in a warm voice, his face reflecting calm assurance. Sensei then began helping her. While the effort still took all her strength, her countenance had completely changed. What was once the slowest slicing station had become the fastest.

There were so many lessons to be learned from that. Rather than being impatient with her, he encouraged her. Rather than replace her with someone who may have been more physically able, he found a way to best display her abilities. And with unity, they produced amazing results.

When all the melon had been sliced, Sensei began serving the members. Watching all this, I decided that Sensei was someone I could trust, and I wanted to emulate his behavior.

Recalling that moment 26 years later, I determined that, rather than let daily life wear me out, I would make it the stage for showing actual proof of my mentor’s teachings. I became more involved in SGI activities and felt a renewed sense of self-confidence. 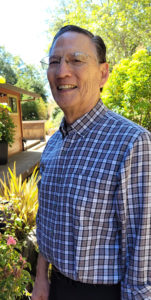 Following the path of mentor and disciple gave me the strength to support my daughter Elise after she was diagnosed with multiple sclerosis in 2011. She was just 22. The disease moved through her body rapidly, and she was soon in a wheelchair. When her symptoms grew worse, we weren’t sure she would survive. This was the catalyst, however, for us to chant Nam-myoho-renge-kyo as a family for her recovery. And although there is no cure, we decided that since we have the Gohonzon, why not chant to completely defeat it? We found a doctor who recommended an effective treatment, and today, she is walking again. The disease still flares up, but if you saw her, you wouldn’t know she had it.

I also faced a major hardship in 2017 during the Tubbs Fire, which devastated several cities in Northern California. All my material possessions were consumed by the fire. In fiercely chanting Nam-myoho-renge-kyo, I felt immense gratitude to be alive and to have Sensei as my mentor. I determined that it was time for me to cast off my transient identity and reveal my true self.

Fifty-two years into my practice, my mentor-disciple relationship continues to evolve. A few years ago, I learned from volume 23 of The New Human Revolution how Sensei helped develop a correspondence education course at Soka University for people who hadn’t completed higher education. One student was 73.

Until I read this, my goal toward 2030 was simply to be alive. But I decided that I wanted to do more with my life and show my daughters the spirit to continue striving even in one’s 70s and beyond. So, I enrolled in a correspondence course and am working on my bachelor’s at 72. I’m also in the process of buying a condo. While people my age may be putting the finishing touches on their lives, I’m beginning a new phase.

Sensei’s encouragement in The New Human Revolution has guided each aspect of my life and has outlined my path as a disciple. Fighting for kosen-rufu alongside my mentor is what gives me the greatest joy in life.

Q: What advice would you give to newer practitioners?

Ken Wada: I recommend you read The New Human Revolution. You will find that the oneness of mentor and disciple is a powerful impetus to living a life of complete confidence and pride. You will also understand the crucial role the SGI plays in spreading the Mystic Law to enable all humanity to unlock their inner potential.

Turning Adversity Into a Gift

Breaking the Thick Walls of Karma