May 4, 2018, is a day I remember only the morning of. I trekked out to Venice Beach for a temporary summer job. I had so many goals for that year. I had created a film that was selected to be shown at a film festival in Hungary. I was also looking forward to the SGIUSA’s Lions of Justice Festival scheduled for Sept. 23.

After work, as I walked toward my car, an attacker stabbed me in the lung, liver, neck and face. The worst part was when the knife went through the left side of my head and penetrated my brain. I was left for dead.

An ambulance rushed me to a neuro trauma center, where all-night surgery and seven blood transfusions kept me alive.

My mother, horrified by the news, flew out from Washington State to be at my side. Doctors were unable to tell her yet if I would survive. She stayed for my entire journey in the hospital.

I was supposed to attend a lesson the following morning with my acting coach and friend, Gabe. When I didn’t show up for class, Gabe and his wife, Kiki, found out what had happened, rushed to the hospital and never left me.

In between therapy sessions and visitors, I slept all the time. I could barely talk, and when I did I sounded like Mickey Mouse due to a damaged vocal cord. My left eye was shut, and when it finally opened, it drifted off to the left, and I was told it may never correct itself. I suffered greatly from memory loss, but one of the few memories I still had was gongyo. 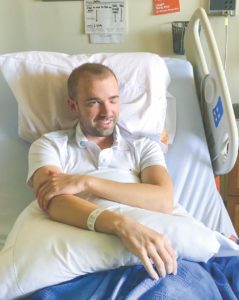 Anton’s road to recovery included a five-month hospital stay, during
which time his SGI friends often visited and encouraged him. Photo by Gabriel Del Vecchio

Throughout my recovery, I received so much support from my SGI Buddhist community. I had constant visitors, each functioning as a protective force to sustain my life. My mom lightheartedly mentioned that she felt like a secretary scheduling all my guests.

One of the proudest moments of my life was receiving a message from my mentor, Ikeda Sensei, who said that he was chanting Nam-myoho-renge-kyo for my complete recovery. His words inspire me to polish the mirror of my life, even on the hard days.

After nearly five months in the hospital, I was released and, against all odds, was cleared by my doctor to attend the film festival in Europe and the Lions of Justice Festival with my friends!

Three years have passed, and I’ve made so much progress. I can now move my left eye again, and my stamina has greatly improved. My voice is much closer to normal!

My human revolution has become a “re-evolution” of myself. I’ve met so many people fighting for their lives and have become genuinely more human and empathetic in the process. Now, when I meet someone with a disability, I do not pity them but truly take them into my heart recognizing they are one of the strongest persons in the room. I was also able to introduce the SGI to a young man in the traumatic brain injury rehab center, and he has started practicing Buddhism! I always tell him that through this Buddhism, he’s capable of any life he wants and to chant with the resolve that he will realize many victories.

Gabe and Kiki are now my legal caregivers. I live with them and their family while I recover and work my way toward my full independence, which I know I will soon have. Gabe has stepped into my life as a father figure, which I never had, as I grew up with a single mother. He pushes me to improve myself each day and to continue my art and move my career forward.

Rather than allowing this experience to consume me and pitying myself, I take it as a gift. I’ve broadened my horizons by learning new talents. I’ve even taken a screenwriting class and recently completed my first screenplay. The man who attacked me was quickly caught and incarcerated. The doctor who originally admitted me in the intensive care unit told my mother that my recovery was a miracle and that he wouldn’t have bet a plug nickel on my survival.

I take all of this as proof of my protection. I am still in the process of my rehabilitation with many challenging days ahead, but I have realized that my practice is essential to my healing and that I can victoriously overcome any adversity thrown at me with Nam-myoho-renge-kyo and my vow for kosen-rufu.

One reason Buddhists chant Nam-myoho-renge-kyo each day is to develop strong will and discipline and the ability to tackle any problem seriously with the determination to overcome it.

I Will Do Great Things

Discovering the Path of a Disciple