June 23 is Okinawa Memorial Day [a public holiday in Okinawa Prefecture and a day of remembrance for those who lost their lives during the Battle of Okinawa in World War II]. It was in my beloved Okinawa where, with a vow for peace, I began writing my novel The Human Revolution [in December 1964].

Embodying the same spirit and commitment as his own mentor, founding Soka Gakkai President Tsunesaburo Makiguchi, who died in prison for his beliefs, Mr. Toda stood up alone amid the ruins of war-devastated Tokyo. His heart blazed with his powerful conviction as a Bodhisattva of the Earth, the result of his profound awakening in prison.

This is the starting point of the Soka Gakkai’s great advance toward achieving kosen-rufu and realizing Nichiren Daishonin’s ideal of “establishing the correct teaching for the peace of the land.” When we think of Mr. Toda’s resolve, the fearless fighting spirit of the Bodhisattvas of the Earth surges forth within our lives.

In the revised edition of the Nichiren Daishonin Gosho zenshu (Collected Writings of Nichiren Daishonin), scheduled to be published in Japanese in November this year, a letter thought to be addressed to the lay nun Myoichi will be included for the first time.

It was to Myoichi that Nichiren wrote the letter containing the famous words “Winter always turns to spring” (“Winter Always Turns to Spring,” The Writings of Nichiren Daishonin, vol. 1, p. 536).

In the newly included letter, the Daishonin praises the faith of Myoichi, who remained steadfast in her Buddhist practice and continued making sincere offerings to support him, undeterred by the persecution he faced culminating in his exile to Sado Island.[1] He likens it to the practice of Shakyamuni Buddha, saying: “You are an ordinary woman of the Latter Day of the Law, while he [Shakyamuni] was a sage of earlier times. Your resolve already surpasses his. How could the future rewards [of your practice] be anything but equal to his?”[2]

Truly courageous Bodhisattvas of the Earth are forged through overcoming difficult challenges. And it is amid great struggles that the spirit of a lion king is passed on.

The Daishonin thus promises that a woman with faith even stronger than Shakyamuni’s is certain to receive the same great benefit as the Buddha. I deeply feel this passage can also be read as praise for all Soka women who are devoting themselves to kosen-rufu with the vibrant spirit of Bodhisattvas of the Earth. The women’s division members who strove alongside me during the pioneering days of our movement always kept in mind the following key elements of our Buddhist practice for happiness and victory:

This warm, sunny spirit continues to shine brilliantly today. This is why the Soka family remains undefeated, triumphantly demonstrating that “Winter always turns to spring.”

On July 3, 1957, 12 years after my mentor was released from prison, I was arrested on trumped-up charges by the authorities.

Just prior to that, on June 30, the Soka Gakkai student division was founded, its members vowing to carry out the mission of protecting the people.

Nichiren writes, “In this age as well, it is not one’s allies but one’s powerful enemies who assist one’s progress” (“The Actions of the Votary of the Lotus Sutra,” WND-1, 770).

Truly courageous Bodhisattvas of the Earth are forged through overcoming difficult challenges. And it is amid great struggles that the spirit of a lion king is passed on.

In July, we will celebrate the 70th anniversaries of the young men’s division and the young women’s division.[3] I am praying and watching over our young successors as they bravely surmount every obstacle and adversity to achieve wonderful dramas of transformation through their own great human revolution.

Let’s continue advancing triumphantly, brimming with the fighting spirit of the Bodhisattvas of the Earth!

This is Ikeda Sensei’s essay, originally published in the June 21, 2021, issue of the Soka Gakkai’s daily newspaper, Seikyo Shimbun. 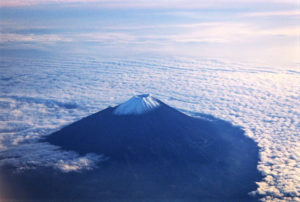 Ahead of July 3, the anniversary of second Soka Gakkai President Josei Toda’s release from prison in 1945, Ikeda Sensei and his wife, Kaneko, visited the Soka Gakkai Headquarters in Tokyo on July 2, 2021.

Sensei and Mrs. Ikeda conducted gongyo in honor of founding Soka Gakkai President Tsunesaburo Makiguchi, who, undaunted by oppression from militarist authorities, gave his life to bravely raise the banner of kosen-rufu in Japan, a nation on the brink of ruin. They also solemnly prayed in remembrance of the dignified life of Mr. Toda.

—Adapted from the July 3, 2021, issue of the Soka Gakkai’s daily newspaper, Seikyo Shimbun

Imparting Hope and Inspiration Through Dialogue