The 81st annual George Foster Peabody Awards was held in June 2021. Among the winners was June Cross, of New York, and her team for their documentary Whose Vote Counts. Ms. Cross, a longtime SGI-USA member, is a documentary producer and professor at Columbia University’s Graduate School of Journalism, where she founded a program in journalistic documentaries. The World Tribune spoke with her about life as a filmmaker and how her Buddhist practice has informed her work.

World Tribune: Congratulations on your Peabody Award! What led you to pursue journalism?

June Cross: Thank you! When I was in junior high school, a journalist visited our school assembly to describe his job. When he said that reporters get to ask strangers questions that are none of their business, I immediately resolved to follow that career! My biracial biological family fell apart when I was a toddler, and I was taken in by a working class Black family. My white mother married a Hollywood actor, and I spent my childhood traveling between New Jersey and California. I observed the societal chasms. I saw that people created those chasms, and people would have to bridge them.

WT: How has your Buddhist practice informed your career?

Cross: My faith gives me the courage to raise my own voice. It all starts with changing myself. Then, it’s about heart-to-heart communication. I try to become the change that I need to be in the world, which is the hardest thing, but chanting Nam-myoho-renge-kyo helps me on a daily basis to take baby steps and climb to the top of the mountain.

When I think there’s no way we can get a project done, two aspects of Buddhism keep me on track: transforming my anger into the desire for justice for all people and developing self-worth. Every time I start a new documentary, I chant that it makes a difference and amplifies the voices of the subjects, who are so generous to share their stories with me.

Every time I start a new documentary, I chant that it makes a difference and amplifies the voices of the subjects, who are so generous to share their stories with me.

WT: How many films have you produced in your career?

Cross: I’ve done 12 films so far, but so many times midway, I’ve felt I failed. I worked on one film for five years. I wanted to give up. But my fiancé, a longtime SGI member, encouraged me to challenge myself in front of the Gohonzon until I developed the courage and wisdom to finish it. When I finally completed the film, it aired on PBS and was nominated for an Emmy.

The process of continuously picking yourself up and building that “muscle” leads to the next breakthrough. It doesn’t feel that way when I’m in the middle of it, but daimoku is what gets me there.

WT: What challenges did you face with your most recent film?

Cross: When working on Whose Vote Counts, we had to be sure we were COVID-safe while interviewing, and then we had only 12 weeks to complete the film before air. It seemed impossible. While chanting, I thought of Nichiren Daishonin exiled on Sado Island, wearing minimal clothing while writing letters, often while sick and eating inconsistently. If he could do that, I could certainly find a way to complete this film!

For the better part of two months, I woke up early and stayed up late, chanting several hours a day for the film to be true to the people we were portraying and to create value. My consistent Buddhist practice put me in rhythm. I started the day with determination and ended it with appreciation.

WT: How powerful. What is your underlying determination in your work and life? 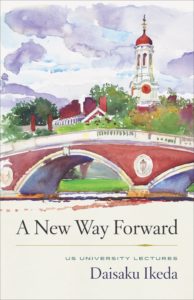 Read Ikeda Sensei’s U.S. university lectures in
A New Way Forward. Visit bookstore.sgi-usa.org to purchase the title as a hard copy ($6.95) and e-book ($4.95).

Cross: When I was working on my first documentary in Boston in 1993, Ikeda Sensei visited to lecture at Harvard University. Leading up to his visit, the local SGI members went on a campaign to chant to find our respective missions. I realized my mission was to be a communicator for kosen-rufu, and I’ve held onto that.

Due to the pandemic, many people were struggling, so I started thinking about how I could support members in my district. I applied my mission of being a communicator for kosen-rufu to a new level and stood up as a communicator in my local organization. Buddhism is life, so to make a real difference, we have to think global and start local.

WT: Any parting thoughts on how individuals can positively impact society?

Buddhism has given me an unlimited sense of self-acceptance. Part of that is learning that our successes and failures make us who we are. I might not feel it in a particular moment, but I know that my Buddhist practice will lead me to the desired outcome.

About the Peabody Awards

Every year, the George Foster Peabody Awards program recognizes 30 stories across media that shine a light on social issues with depth and complexity. Sponsored by the University of Georgia, the awards were conceived by the National Association of Broadcasters in 1938 as the radio industry’s equivalent of the Pulitzer Prizes. They later added other media outlets such as broadcast and cable television and the internet. Because of their academic affiliation and reputation for discernment, the awards are held in high esteem within the media industry.

‘Discarding the Shallow and Seeking the Profound’