Ikeda Sensei has had dialogues with leading figures throughout the world to strengthen and advance the path to peace. To date, more than 80 of his dialogues have been published in book form. This new series highlights one dialogue a month.

The following excerpts are from Human Rights in the Twenty-first Century (pp. 109–13), a dialogue between Daisaku Ikeda and Austregésilo de Athayde, president of the Brazilian Academy of Letters and champion of human rights. 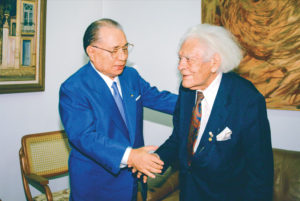 Daisaku Ikeda: The bodhisattva is an embodiment of compassion. The word compassion itself (jihi in Japanese) is a translation of two Pali terms. The first is mettā, which means friendship. The second is anukampana, which means pity and sympathy. Taken together, they mean the elimination of others’ suffering by the removal of anxiety and fear and the imparting of happiness to others in the form of joy, security and hope. …

Nichiren Daishonin elected as prime model for practical behavior the one called Sadāparibhūta, who appears in the 20th chapter of the Lotus Sutra. His name, which means Never Disparaging, symbolizes the profound respect he demonstrated for the Buddha nature within each person he met. …

Austregésilo de Athayde: A polished sense of equality that eliminates any kinds of discrimination accords with subtle religious sense and sublime principles. Your perspectives for the 21st century will relieve humanity of fear and make people awake to the new world. It is by confronting discrimination and respecting equality that we can protect our valuable world. …

Ikeda: To the scorn and maltreatment he met on all sides, the Bodhisattva Never Disparaging returned only nonviolence and compassion. His attitude convinced even his revilers to join him in working to relieve suffering. His behavior—a model for human rights advocates of the future—may be summarized as follows:

3. Earnest, courageous challenge to achieving the self-realization of oneself and others.

Firm belief in absolute equality means to believe that all living beings are equally endowed with Buddhahood, which is universal dignity. Unwavering reliance on nonviolent, compassionate dialogue is the battle to extirpate evils such as anger, greed and foolishness and to evoke the spirit of compassion and justice, by means of dialogue without resorting to violent means. Earnest, courageous challenge to realization of oneself and others is made possible by the bodhisattva’s courageous struggles. Oneself, from the Buddhist perspective, is nothing but Buddhahood. It is possible to build happy lives when each person makes his or her own particular personality bloom by bringing forth their Buddhahood.

Athayde: As what you say proves, your thoughts and deeds are all future-oriented. You teach new value criteria to shake humanity from its conceited assurance of being the lord of creation and, on the level of the faith our humanity requires, stimulate the development of a new human history.

The Advent of a New Humanism

Athayde: In 1925, Albert Einstein visited Rio de Janeiro. Assis Chateaubriand and Azevedo Amaral had luncheon with him, and, at their invitation, I joined the party. It was not the place to discuss science, but, listening to him respectfully, we enjoyed what he had to say about art, Brazil and the Brazilians. Einstein was deeply impressed by the way so many different races live together peacefully in our country and by our lack of racial discrimination and anti-Semitism. Appreciative of the accuracy of his observation, we commented that a basically tolerant educational system formed the national characteristics he discerned. …

Ikeda: When you first met him, Einstein was pondering the significance of his General Theory of Relativity and the nature of the universe indicated by it. Wolfgang Pauli, who worked with him, said that, in his late years, Einstein devoted much thought to a unifying theory. The universe he observed was vast and included an element of the mystical. Buddhism, too, discovers mystical elements in the universe and considers the very existence of humanity a manifestation of miraculous universal power. For Einstein, ultimate scientific knowledge should reveal a universal cosmic law (the unifying principle). From the Buddhist standpoint, the universal cosmic law is the Mystic Law of the Lotus Sutra, formulated by Nichiren as Nam-myoho-renge-kyo, the operations of which take the form of magnificent compassion. …

Athayde: A sense of our blessedness should inspire understanding of the need to live harmoniously with all our fellows, even those with whom we do not see eye to eye. When we live in harmony with others, accept coexistence with even those in opposition and understand each other, we can realize the great community indicated by the Universal Declaration. (pp. 109–13)

When we live in harmony with others, accept coexistence with even those in opposition and understand each other, we can realize the great community indicated by the Universal Declaration.

• Fought against Brazil’s ruling dictatorship in the 1930s and was imprisoned and forced to live in exile for three years. Continued his activism through writing.

• Served for 34 years as president of the Brazilian Academy of Letters, a literary nonprofit society that protects the national language and literature.

• Was the Brazilian representative to the third General Assembly of the United Nations.

• Played a major role in drafting the Universal Declaration of Human Rights, which was adopted by the U.N. in December 1948.

Excerpts From Nichiren’s Writings in Volume 27