Where can we find hope?” When I was 19, I was earnestly seeking an answer to this question. After World War II ended, Japan was in great turmoil, and hope was nowhere to be found. It was during that time that I met my mentor, second Soka Gakkai President Josei Toda.

I summoned my courage to ask him, “What is the correct way of life?”

Mr. Toda answered with sincerity and clarity. He then said to me: “It’s fine to think about what is the correct way of life, but you’d be putting your time to better use if you try practicing Nichiren Buddhism. You are young. If you do so, someday you’ll definitely find yourself quite naturally following the correct path through life!”

I was just an ordinary youth who was poor and sickly, but Mr. Toda showed great faith in me and warmly encouraged me. I decided to follow this man as my teacher, and 10 days later, on Aug. 24, I began practicing Nichiren Buddhism. I felt a surge of hope rise within me. 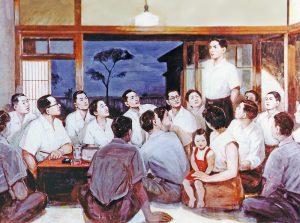 Mr. Toda once told me: “Neither hope nor despair comes from others. Such emotions aren’t dependent upon our situations or circumstances. They all come from within us. That’s why you have to take responsibility for your own life.”

Nichiren Buddhism teaches that we each possess within us an unsurpassed treasure and a wellspring of hope. Faith in the Mystic Law enables us to tap this source of hope limitlessly. Speaking from my 72 years’ experience of practicing Nichiren Buddhism, I can say without a doubt that this truly is the correct way of life.

While in exile on Sado Island, Nichiren Daishonin wrote many important works—such as “The Opening of the Eyes” and “The Object of Devotion for Observing the Mind”—offering supreme hope to all humanity.

Two exemplary disciples who supported and assisted the Daishonin during his exile were Abutsu-bo and his wife, the lay nun Sennichi, who both lived on Sado Island. It is said that Abutsu-bo was originally a follower of the Pure Land (Nembutsu) teachings. He later converted to Nichiren’s teachings with his wife, after being impressed by Nichiren’s character.

The Daishonin’s first residence on Sado was a dilapidated shrine. During the frigid winter, snow blew relentlessly through gaps in the roof and walls. In addition, he lacked sufficient food and warm clothing. He was also kept under surveillance, and people who regarded him with enmity threatened his life. Despite this, Abutsu-bo risked his life by going in the still of the night to supply him with food and other necessities.

After Nichiren was pardoned from exile on Sado and moved to Mount Minobu (the southwest area of present-day Yamanashi Prefecture in Japan), Abutsu-bo, despite his advanced age, made the long, arduous trip to visit him on no less than three occasions. Sennichi prepared the offerings and sent her husband to deliver them.

Abutsu-bo once asked the Daishonin about the meaning of the treasure tower that appears in the Lotus Sutra. In “The Emergence of the Treasure Tower,” the 11th chapter, an enormous tower suddenly emerges from beneath the ground and is suspended in midair. Its height is said to be at least one-third of the Earth’s diameter. Adorned with seven kinds of treasures—such as gold, silver and lapis lazuli—the tower sparkles brilliantly.

Abutsu-bo asks what the treasure tower signifies, to which Nichiren replies: “In the Latter Day of the Law, no treasure tower exists other than the figures of the men and women who embrace the Lotus Sutra. It follows, therefore, that … those who chant Nam-myoho-renge-kyo are themselves the treasure tower” (“On the Treasure Tower,” The Writings of Nichiren Daishonin, vol. 1, p. 299).

Nichiren Buddhism teaches the infinite worth and nobility of each individual in a way that is accessible to all. Some of you may be worried that you aren’t doing as well in your studies or extracurricular activities as you’d like.

Speaking from my 72 years’ experience of practicing Nichiren Buddhism,
I can say without a doubt that this truly is the correct way of life.

Some of you may have lost your confidence, wishing you were more talented or skilled. But you should never be swayed by comparisons to others. Your true worth is not decided by others’ evaluations. Each of you is a treasure tower—in other words, your life itself is an incredibly precious treasure.

It’s important to live true to yourself. Other people are other people; you are you. Be your own person. No matter what happens, as long as you continue chanting Nam-myoho-renge-kyo, you can make your life shine limitlessly in your own unique way as a magnificent treasure tower that is as vast as the universe and at one with the Mystic Law. 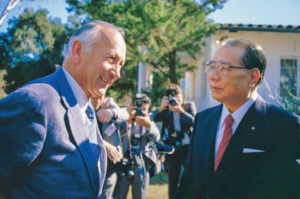 Ikeda Sensei meets with journalist and humanist Norman Cousins, who spoke tirelessly for nuclear abolition and was deemed the “conscience of America,” Los Angeles, Feb. 4, 1987. Photo courtesy of Seikyo Press.

August is the month when the atomic bombs were dropped on Hiroshima and Nagasaki (on Aug. 6 and 9, 1945). American journalist Norman Cousins (1915–90), a dear friend of mine, visited Hiroshima four years after the end of World War II. He later said that, through that experience, he learned firsthand of the terrible inhumanity of nuclear weapons. The example of those who survived the bombings and rebuilt their lives in the war’s aftermath, he said, also taught him the resilience of the human spirit.

Dr. Cousins devoted his energies to making it possible for young women—known as the Hiroshima Maidens—who sustained disfiguring burns as a result of the atomic blast to receive reconstructive surgery in the United States.

Dr. Cousins himself recovered from a life-threatening connective-tissue disease and later also a heart attack. Asserting that hope was his secret weapon, he said that nothing could surpass the power of hope.

Hope is synonymous with the willingness to keep believing in possibilities and in your inherent potential, no matter what. Hope’s worst enemy is negativity, a lack of belief in yourself, causing you to think that “I can’t do it” or “I’m no good.”

Faith is the struggle to continue believing in our potential, our possibilities, to the very end. Chanting Nam-myoho-renge-kyo strengthens the power of hope that lies within us. Those who live with this spirit of challenge will not fail to shine as treasure towers of happiness and victory.

The Unshakable Vow of Mentor and Disciple

The Eternal Shared Struggle of Mentor and Disciple