What distinguishes Nichiren Buddhism from other religions and philosophies? We could say it is the view that every person, without exception, possesses the Buddha nature, or the potential to be a fully awakened human being.

Chanting Nam-myoho-renge-kyo is the most powerful means for bringing forth the overriding power of our Buddha nature and transforming our negative karma.

While the Buddha nature is described in many ways in various Buddhist sutras and teachings, one view associates it with the ninth or deepest level of consciousness.

Ikeda Sensei explains: “The ninth consciousness is itself the ultimate reality of all things and is equivalent to the universal Buddha nature. Buddhism teaches that we can change our deepest karma through drawing upon this inner capacity of our lives” (Unlocking the Mysteries of Birth and Death, p. 162). Let’s briefly study the nine levels of consciousness.

“The ninth consciousness is itself the ultimate reality of all things and is equivalent to the universal Buddha nature. Buddhism teaches that we can change our deepest karma through drawing upon this inner capacity of our lives.”

The Dynamics of Changing Karma

The principle of the nine consciousnesses teaches that we can change any and all karma.

The first five of the nine consciousnesses are related directly to our five senses: sight, hearing, smell, taste and touch. The sixth, called mind-consciousness, integrates the information from the five senses and processes how we perceive our surroundings.

These first six levels, our conscious realm, represent the awareness with which we process the outside world, an awareness influenced and sometimes distorted by what is going on in our deeper levels of consciousness.

The next three levels deal with these deeper realms of consciousness. The seventh, called mano-consciousness, is said to be where self-awareness or ego originates, and where our subconscious impulses, including the impulse for self-preservation, are found.

The eighth level is called alaya-consciousness. The Sanskrit word alaya means “repository” or “storehouse,” thus it is also called the karmic storehouse. It is where the latent effects of all our thoughts, words and deeds from past lifetimes to the present reside.

As an example, if we mistrust people due to past experiences, we may try to shield ourselves from being hurt (mano-consciousness). This may lead to perceiving others as untrustworthy or hesitating to share our honest thoughts (first six levels of consciousness). Our thoughts, words and actions in this regard remain imprinted in our lives (alaya-consciousness). These in turn may influence our awareness, actions and the future, leading to a cycle of suffering.

Chanting Nam-myoho-renge-kyo can be likened to drilling through the accretions and delusions found in the other levels of consciousness and striking the pure wisdom of the ninth consciousness, which can wash away all impurities.

Nichiren advises, “You should base your mind on the ninth consciousness, and carry out your practice in the six consciousnesses” (“Hell Is the Land of Tranquil Light,” The Writings of Nichiren Daishonin, vol. 1, p. 458). Regarding this passage, Sensei says:

By establishing faith in the ultimate reality and incorporating Buddhist practice into our daily lives, we can access infinite wisdom, power and compassion; we can achieve a fundamental inner reformation and establish an unshakable foundation for true happiness. By analogy, while a piece of wood floating in a stream will be swept away at the whim of the current, even the most powerful of currents cannot shift an island of rock. (Unlocking the Mysteries of Birth and Death, p. 164)

Transforming the Karma of Humanity

While the first seven consciousnesses are said to disappear when we die, the lives as we traverse the cycle of birth and death. This might explain why we can see certain patterns throughout history that extend beyond individuals and expand to all humankind.

For instance, despite significant advances in science, economics and many other fields, the impulse of greed has largely impinged on the global environmental crisis we now face, as well as great disparities in wealth. Sensei explains:

Our karmic energy mutually impacts our loved ones and indeed all humankind. It even affects animals and plants. A positive change in the karmic energy in the depths of one’s life becomes the cogwheel for change in the lives of others. (Unlocking the Mysteries of Birth and Death, p. 160)

When based on the ninth consciousness, we can view all our karmic impediments as cogwheels for manifesting our Buddhahood. By chanting, we not only gain complete control of our lives but also bring forth the wisdom, courage and compassion to create a world based on the Buddhist ideals of respect, equality and the interconnectedness of life. 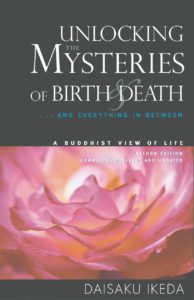 Ikeda Sensei’s celebrated work Unlocking the Mysteries of Birth & Death is available in print, e-book and audiobook formats. The book explores the meaning of life and death and provides invaluable insights from the perspective of Nichiren Buddhism. Whether one is new to Buddhism or a longtime practitioner, Sensei’s clear and practical explanations in this work can deepen anyone’s understanding of Buddhist philosophy and appreciation for their own life.