Congratulations on this joyous meeting celebrating the 70th anniversary of the young women’s division’s founding! Today’s gathering marks the vibrant opening of the gateway to a new age of kosen-rufu and of establishing the correct teaching for the peace of the land! 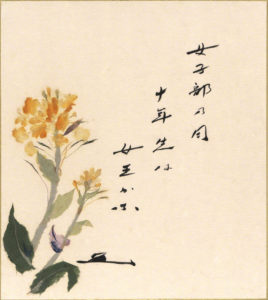 A haiku composed by Sensei: “Young Women’s Division Day / in the decade ahead / may you become queens.” (tentative translation)

Without a doubt, Nichiren Daishonin, the Buddha of the Latter Day of the Law, would be absolutely delighted to witness the sincere efforts of our dedicated young women of Soka. Thank you all!

Nichiren warns, “The sorrow and distress of the common people will pile up until it destroys the nation” (“The Tendai and True Word Schools,” The Writings of Nichiren Daishonin, vol. 2, p. 526). That is what makes the great life-affirming philosophy of Nichiren Buddhism so important. It dispels people’s sorrow and distress and spreads hope and the joy of living.

In “The Daimoku of the Lotus Sutra,” which Nichiren wrote to a female disciple, he explains the three meanings of the character myo [of Nam-myoho-renge-kyo]. 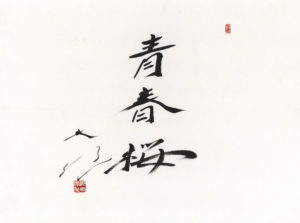 Calligraphy, “Cherry Blossoms of Youth,” inscribed by Sensei on July 19, 1978 to celebrate the founding of the young women’s division.

As young people who chant Nam-myoho-renge-kyo and take action based on the Mystic Law, you embody the power “to open,” “to be fully endowed” and “to revive.” Because of that, you can absolutely overcome every challenge you face, whether in your personal lives or in society, no matter how difficult. You will be able to break through anything and help others do the same.

In times of both joy and sorrow, never forget to chant Nam-myoho-renge-kyo, the ultimate rhythm of happiness of the universe. Courageously tap the life state of Buddhahood within you, wisely strive to create and spread harmony and peace from where you are now, and be a guiding light for the joyous renewal of people and places everywhere. 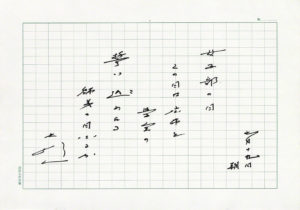 My wife, Kaneko, and I will never forget these impassioned words of our mentor, second Soka Gakkai President Josei Toda: “Humanity must change its course by focusing on the happiness of women. It is crucial, therefore, that young women possess a sound life philosophy, along with a strong life force that will allow them to be undefeated by any onslaught of karma.”

We believe and pray that in the coming decade, you, the young women of Soka, working harmoniously and cheerfully with your Kayo-kai sisters across the globe, will make that a reality. May each of you enjoy a youth of health, good fortune and victory!

This is a message from Ikeda Sensei and Mrs. Ikeda to the Nationwide Young Women’s Division Meeting, commemorating the division’s 70th anniversary,[1] held at the Soka Gakkai Headquarters in Shinanomachi, Tokyo, and broadcast live to 300 venues across Japan, on July 18, 2021. It was originally published in the July 19, 2021, issue of the Soka Gakkai’s daily newspaper, Seikyo Shimbun.

My True Disciples of the Young Men’s Division—Hold High the Banner of ‘Winning Based on Buddhism’!