It is a Soka Gakkai tradition to use summer as a time for developing ourselves, fostering capable people and working toward a hope-filled future.

This year again, amid the COVID-19 pandemic, members throughout Japan have employed their ingenuity to carry out various summertime activities aimed at fostering the future division, including the Soka Family Gatherings, the English Skit Contest and art, essay and book review contests. I would like to express my deepest gratitude to all those who are encouraging and fostering our future division members.

Nichiren Daishonin writes, “Even one seed, when planted, multiplies” (“A Robe and an Unlined Robe,” The Writings of Nichiren Daishonin, vol. 2, p. 602). Let’s make this a summer of planting positive seeds in the earth of young hearts.

Second Soka Gakkai President Josei Toda was an educator dedicated to inspiring in youth a passion for learning and nurturing in them the ability to create value.

Shortly after deciding to make Mr. Toda my mentor in life at the age of 19, I copied a quotation from the American poet and philosopher Ralph Waldo Emerson (1803–82) in one of my notebooks: “None can keep you but rectitude only, rectitude forever and ever!”[1] Emerson commends a life of rectitude and of staying true to our convictions, as firmly as a seasoned ship’s captain grasps the wheel in a storm. 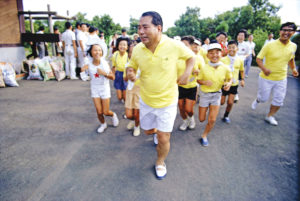 During the turbulent times following World War II, I encountered my great spiritual captain, Mr. Toda, who taught me how to live an honest and upright life—a life of rectitude. There is no greater happiness than this.

And now, I am filled with unsurpassed joy that I can entrust the magnificent voyage of peace, culture and education that I have charted with my fellow members of the Soka family, people of true rectitude, to our successors, the young global citizens of the 21st century.

During the turbulent times following World War II, I encountered my great spiritual captain, Mr. Toda, who taught me how to live an honest and upright life—a life of rectitude. There is no greater happiness than this.

The Chubu Region,[2] with its tradition of being a great stronghold of our movement, is a model in its initiatives to foster the future division. The Soka Gakkai’s annual English Skit Contest also originated there.

July 27 is Chubu Day. At the leaders meeting where this day was first announced 45 years ago (in 1976), I shared the following passage from Nichiren’s writings and pledged with members to continue advancing toward realizing the great vow for kosen-rufu, forever united as good friends:

All disciples and lay supporters of Nichiren should chant Nam-myoho-renge-kyo with the spirit of many in body but one in mind, transcending all differences among themselves to become as inseparable as fish and the water in which they swim. This spiritual bond is the basis for the universal transmission of the ultimate Law of life and death. (“The Heritage of the Ultimate Law of Life,” WND-1, 217)

On that occasion, we also reconfirmed these six guidelines:

1) Do gongyo correctly and vigorously.
2) Offer guidance and share Nichiren Buddhism with compassion.
3) Try to study the Daishonin’s teachings each day.
4) Make personal experiences the focus of discussion meetings.
5) Bring all meetings to an end by 8:30 p.m.
6) Create a harmonious organization.

Our harmonious Soka gatherings are oases bringing hope, security and vitality to our communities, each “[like] a clear cool pond” described in the Lotus Sutra (The Lotus Sutra and Its Opening and Closing Sutras, p. 327).

While wisely putting our health first, let us continue moving forward steadily with our precious future division members, brimming with the life force of the Bodhisattvas of the Earth in the places where we have chosen to fulfill our vow!

This essay by Ikeda Sensei was originally published in the July 27, 2021, issue of the Soka Gakkai’s daily newspaper, Seikyo Shimbun.

Be Victors in the Journey of Life and Kosen-rufu