On January 26, 1975, 158 representative leaders from 51 countries and territories gathered in Guam for the First World Peace Conference. The island was the site of fierce fighting between Japanese and American forces during World War II.

Recalling the commitment of his mentor, second Soka Gakkai President Josei Toda, to the ideal of global citizenship, Shin’ichi Yamamoto signed the guestbook, recording his nationality as “The World.”

The conference witnessed the birth of the International Buddhist League (IBL), a global peace organization focused on the operational aspects of expansion, as well as the Soka Gakkai International (SGI), to spread the faith-based ideals of the Soka Gakkai throughout the world and to unite its global movement.

Shin’ichi was appointed SGI president by the unanimous decision of the delegates. The participants also united in adopting a Declaration for Peace, calling for those awakened to the sanctity of life to resolutely work to secure lasting peace.

Taking the podium, Shin’ichi called on the participants: “I hope that you will dedicate your noble lives to sowing the seeds of peace of the Mystic Law throughout the entire world. I shall do the same” (The New Human Revolution, vol. 21, p. 33).

While leaders from around the world whom Shin’ichi had nurtured attended the conference, the members in South Korea had not been able to settle on and send an official delegate in time for the conference. However, over the years, as they overcame various challenges, the unity among the members there only grew stronger, and the organization experienced great development in subsequent years. 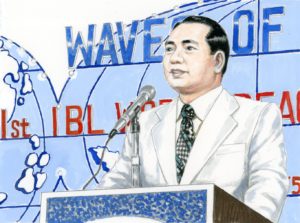 On January 26, 1975, representatives from 51 countries and territories gathered in Guam for the First World Peace Conference. At this momentous gathering, the Soka Gakkai International (SGI) was officially established with Shin’ichi Yamamoto as its president.

The enthusiastic voice of the moderator rang out as he announced that Shin’ichi Yamamoto would give his first speech as SGI president. Applause and cheers filled the hall.

“Congratulations! And thank you!” said Shin’ichi as he rose to the podium. …

“It could be said that this is a small conference, a gathering of nameless people from various countries and territories. But I believe that today’s gathering will shine brilliantly in history for centuries to come, and your names will no doubt be engraved not only in the saga of the worldwide spread of Buddhism but in human history, as well.” …

Continuing on, Shin’ichi pointed out that the precedence of the logic of profit and of military, political and economic power in contemporary society was a hindrance to peace and a source of the constant state of tension in the world. He stressed that a higher religious philosophy would have the power to overcome the impediments to peace, bring humanity together and open an enduring path to peace.

Shin’ichi cited a passage from The Writings of Nichiren Daishonin: “If the spirit of many in body but one in mind prevails among the people, they will achieve all their goals” (“Many in Body, One in Mind,” WND-1, 618). He then emphasized that if the peoples of all nations worked together in unity, based on the principle of the sanctity of life, lasting peace would be achieved without fail. (NHR-21, 30–32)

Shin’ichi’s words grew more impassioned: “The sun of Nichiren Buddhism has begun to rise above the distant horizon. Rather than seeking after your own praise or glory, I hope that you will dedicate your noble lives to sowing the seeds of peace of the Mystic Law throughout the entire world. I shall do the same. At times I will lead in the forefront, at other times I shall stand by your side, and at still other times, I will watch over you from behind the scenes. I will always be supporting you with all my heart.”

Shin’ichi closed by ardently calling out to the participants, “As courageous, compassionate and dedicated disciples of Nichiren Daishonin who are fully committed to truth and justice, please live out your whole lives in a positive and uplifting way, striving for the prosperity of your countries, the happiness of the people and the precious existence of humankind itself.”

As soon as Shin’ichi’s words were translated into the various languages, the room burst into applause. (NHR-21, 33–34)

No matter how adverse the circumstances may be at present, if we continue to assiduously sow the seeds of kosen-rufu, those seeds are certain to flower eventually—or rather, our resolve should be to see to it that that happens. We must pray fervently and wait patiently for the arrival of the right time, while also striving to bring about that day. (NHR-21, 42–43)

Advancing together in harmonious unity is in itself the personal triumph of each individual over egoism, because unity cannot be created among those who are self-centered and uncooperative. (NHR-21, 82)