The “SGI” chapter in volume 21 of The New Human Revolution provides a detailed account of the formation of the Soka Gakkai International (SGI) and the spirit behind its founding. The organization was established on January 26, 1975, at the First World Peace Conference held in Guam.

Initially, the only Soka Gakkai-affiliated organization scheduled to be inaugurated that day was the International Buddhist League (IBL), a global peace organization aimed at providing assistance and mutual support to the members living outside Japan, helping them keep in close communication and coordinate various activities as the Soka Gakkai movement continued to spread across the world. It was focused on the operational aspects of international expansion.

However, in the course of preparing for the IBL’s formation, it became clear among national leaders and representatives that another organization—what later became the SGI—that could provide members with sound guidance in faith was also needed. While operational aspects of their respective organizations could be managed through liaising with one another, they felt that in order to promote worldwide kosen-rufu in earnest it was absolutely essential to have a mentor from whom they could learn about faith and the Soka Gakkai spirit, and they strongly wanted Shin’ichi Yamamoto to serve as this international body’s central leader.

After careful deliberation, Shin’ichi finally decides to accept their request. As stated in the novel:

The joint commitment of mentor and disciple—exemplified by Shin’ichi’s passionate dedication to fostering truly awakened people capable of working for the peace and happiness of humanity, combined with the ardent wish of members around the globe to seek their mentor in Buddhism—brought about the birth of the SGI.[1]

The world today is being pummeled by storms of adversity, and now, more than ever, it is time for each of us to once again affirm the founding spirit of the SGI and make greater efforts to strengthen the mentor-disciple bond within our lives.

The “SGI” chapter describes our organization as “a network linking people around the world through the shared bonds of ‘many in body but one in mind.’ It shines as a brilliant beacon for global peace.”[2] Staying true to these words, let us make even greater efforts to unite with our fellow members across the world as we continue our advance.

Events Surrounding the Publication of Volume 21

From February 1, just a few days after the SGI was established, a major Japanese newspaper began serializing a collection of Ikeda Sensei’s autobiographical essays, Watakushi no rirekisho (My Recollections), and these were released in book form in the spring. These articles, which expressed Sensei’s ardent call for peace based on his personal life experience, were well received by readers. They revealed how his life journey had been one committed to creating lasting peace in the world through encouraging people everywhere to engage in their individual human revolution.

In the “SGI” chapter, Shin’ichi asks the participants of the First World Peace Conference hailing from 51 countries and territories to join him in making the following commitment:

The sun of Nichiren Daishonin’s Buddhism has begun to rise above the distant horizon. Rather than seeking after your own praise or glory, I hope that you will dedicate your noble lives to sowing the seeds of peace of the Mystic Law throughout the entire world. I shall do the same.[3]

Since this gathering, the starting point of the SGI, Sensei has continued to take the lead in forging friendships with people from all walks of life throughout the world.

Thereafter, the global kosen-rufu movement expanded at an accelerated pace. By 2008, the year in which serialization of volume 21 in the Seikyo Shimbun began, it encompassed 190 countries and territories, reaching a significant milestone in its development. This also happened to be the year Sensei celebrated his 80th birthday. In an essay published in 1998, in which he had set down what he wished to accomplish in the decades ahead, he had written: “To the age of 80: Completing the foundation for worldwide kosen-rufu.”[4] That had indeed become a reality.

Starting in September 2007, the Soka Gakkai’s monthly nationwide youth division leaders meetings took on new significance. They were held in the spirit of ushering in the second act of kosen-rufu. This was closely followed by the establishment of the Ikeda Kayo-kai, the SGI young women’s training group, on March 16, 2008. Volume 21, which was being published daily in the Seikyo Shimbun at that time, contains important guidelines for those advancing kosen-rufu in this second act—namely, how vital it is to remain true to the path of the oneness of mentor and disciple throughout their lives. In this volume we find such passages as: “Our unity is based on the indivisible solidarity of mentor and disciple dedicated to kosen-rufu”[5]; and “We need to maintain an active seeking spirit and learn from a mentor.”[6]

In volume 10 of The Human Revolution, we find a passage explaining that only when the disciple has grasped the mentor’s intention and made it their own, such that it pulses in the disciple’s life and manifests spontaneously in their actions, could it be said that the mentor-disciple bond has been honed to the point where they are truly one.[7] The relationship between mentor and disciple is entirely defined by the attitude of the disciple; the  mentor’s achievements for worldwide kosen-rufu only shine when his disciples are proactive and take personal initiative to advance the movement.

Dialogue to Build a Human Network of Goodness

“In carrying out dialogue, courage and conviction are essential. The first step is to decide to engage in dialogue, and then it is necessary to make time for it.”[8] In spite of his demanding schedule, this spirit set out in the “People’s Diplomacy” chapter is what enables Shin’ichi to meet and engage in meaningful dialogue with so many of the world’s leaders and thinkers, including Chinese Vice Premier Deng Xiaoping; Cambodia’s Prince Norodom Sihanouk; Dr. Aurelio Peccei, co-founder of the Club of Rome; Valentina Tereshkova, the first woman to travel into space; Soviet Premier Aleksey N. Kosygin; and former Japanese Prime Minister Eisaku Sato.

The quality of a dialogue does not depend upon its length but upon the level of the intent and determination we bring to it. That is why courage and conviction are so key.

What further stands out in this chapter is Shin’ichi’s sincere efforts to do whatever he can to encourage the person before him. In one moving scene, he decides to become the personal guarantor for the first Chinese students to study at Soka University, pledging to do everything in his power to ensure that not even one of them has a disappointing experience. Seeing Shin’ichi embrace the Chinese students like precious members of his family, the faculty and other students also vow to treat them with an equal degree of care and concern.

A passage in the “Resonance” chapter states:

The Soka Gakkai promotes a movement aimed at opening those closed hearts [the hearts of people who are alienated and closed off from each other] and illuminating them with hope and courage through furthering dialogue, thereby building a human network of goodness.[9]

Building this human network of goodness is the purpose of our efforts to engage in dialogue.

The Soka Gakkai is dedicated to achieving kosen-rufu, an objective that, from a certain perspective, could be described as the process of creating a society grounded in mutual encouragement.[10]

As we struggle to create a new normal amid the ongoing COVID-19 pandemic—and especially since we are unable to meet others in person—we may find it is extremely difficult to proactively reach out and encourage others the way we had previously done. Nevertheless, rather than focusing on a specific means or strategy by which to overcome the hurdle of not being able to meet in person, let us instead focus on strengthening our personal determination to create a society grounded in mutual encouragement, no matter what.

The members of the youth division are making good use of online platforms to hold meetings and encourage one another. Many of our members including our seniors are also challenging themselves to create new customs of encouragement through letter writing and phone calls. In a recent essay, Sensei has praised such sincere efforts, saying, “There is no limit to the value we can create.”

In the “Resonance” chapter, we also find these words:

How can we inspire and encourage those members before us who are weighed down with suffering and worry? How can we change their outlook from darkness to light, from despair to hope and from defeat to victory? A genuine leader of kosen-rufu is someone who is able to do this.[11]

Let us indeed be convinced that our efforts to offer encouragement truly can transform people’s state of life from one of despair to one of hope!

Translated from the July 22, 2020, issue of the Seikyo Shimbun, the Soka Gakkai’s daily newspaper. 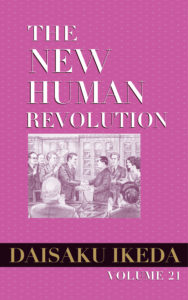 SGI
On January 26, 1975, representatives from 51 countries and territories gather in Guam and establish the Soka Gakkai International. Shin’ichi Yamamoto is inaugurated as its president.

Resonance
After attending a commemorative meeting marking the 15th anniversary of his inauguration as Soka Gakkai president, Shin’ichi visits Europe where he conducts dialogues with Aurelio Peccei, André Malraux and René Huyghe.

Jeweled Crown
During his second visit to the Soviet Union, Shin’ichi receives an honorary doctorate from Moscow State University and delivers a commemorative lecture. He once again meets with Premier Aleksey N. Kosygin.

What is the purpose of Buddhist study?