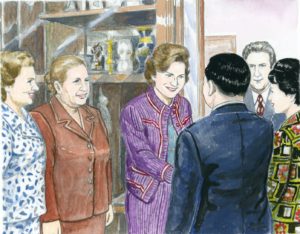 Having finished his schedule in France, Shin’ichi Yamamoto embarked on his second visit to the Soviet Union on May 22.

He met with Chairperson Nina Popova of the Union of the Soviet Societies for Friendship and Cultural Relations with Foreign Countries on May 23. Then, after holding talks with Minister of Culture Peter Demichev, he attended a birthday reception for author Mikhail Sholokhov.

On May 25, Shin’ichi visited the town of Gorki Leninskie where Vladimir Lenin, leader of the Russian Revolution, spent his last years. While there, he greeted and gave gifts to children who happened to be nearby.

On May 26, Shin’ichi met with the chairperson of the Council of the Union, one of two chambers comprising the Supreme Soviet legislature, the mayor of Moscow and the Minister of the Merchant Fleet. Later that afternoon, together with women’s and young women’s division representatives, he met with the chairperson of the Soviet Women’s Committee Valentina Tereshkova, the first woman to venture into space.

Moscow State University conferred an honorary doctorate, the jeweled crown of intellect, upon Shin’ichi on May 27. This was the first time for a university or academic institution to bestow an academic honor on him.

On May 28, he met for the second time with Premier Aleksey Kosygin. Shin’ichi related to the Soviet leader, who had taken a cautious stance toward China, that since their first meeting, he had visited that country and met with Premier Zhou Enlai and Vice Premier Deng Xiaoping. Shin’ichi was prepared to serve as a bridge between the two nations if it would help improve their deteriorating relations. 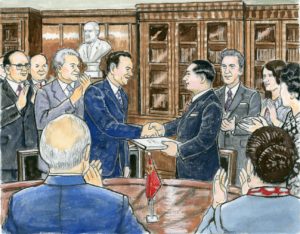 A “Meaningful Laurel Crown of Learning”

On May 27, 1975, Moscow State University held a ceremony to confer Shin’ichi Yamamoto with an honorary doctorate.

Rector [Rem] Khokhlov stood up and announced: “Moscow State University has decided to bestow an honorary doctorate upon President Shin’ichi Yamamoto. We will now begin the conferral. …

“This honorary doctorate is awarded in recognition of President Yamamoto’s enormous contributions to education and peace.”

The initial proposal to award Shin’ichi an honorary doctorate was made at the Moscow State University Faculty Council by the university’s philosophy department. The history department and the university-affiliated Institute of Asian and African Countries had supported the proposal, which was then adopted by the entire faculty council.

“President Yamamoto is an outstanding activist for social welfare and peace, a philosopher and the author of numerous books. In his writings, he has suggested that the most important task we face today is the construction of a new value system governing human relations.” …

This was the first honorary doctorate Shin’ichi had ever received from a university or academic institution. It was a deeply meaningful laurel crown of learning.

A female student then presented Shin’ichi with a bouquet, and musicians graduating from Moscow State University began to play Tchaikovsky’s Second String Quartet.

As he listened to the stately performance, Shin’ichi thought of his mentor, second Soka Gakkai President Josei Toda, and spoke to him in his heart: “Sensei! I have just received an honorary doctorate from Moscow State University, one of the world’s eminent institutions of higher learning. This is entirely the result of the training I received from you. As your disciple, I dedicate this honor to you. I also wish to share this honor with all Soka Gakkai members, who have supported my efforts for education and peace.”

Motivated solely by his wish to realize his mentor’s vision, Shin’ichi had striven arduously for world peace, in line with Josei Toda’s guidance. As a result, he had now been awarded an honorary doctorate from Moscow State University. Shin’ichi keenly felt the wondrousness of the mentor-and-disciple path of Soka. He was also overjoyed that through receiving this honor he could show tangible proof of the greatness of his mentor. (The New Human Revolution, vol. 21, pp. 318–20)

People of genuine humanity directly and candidly express their gratitude to others. There can be no humanism without gratitude or expression of feeling. (NHR-21, 321)

Excerpts From Nichiren’s Writings in Volume 21