This installment, published in the July 15, 2020, issue of the Seikyo Shimbun, focuses on passages from Nichiren Daishonin’s writings that Ikeda Sensei discusses in volume 21 of The New Human Revolution.

“It is certain that widespread propagation of the Law [kosen-rufu] will eventually be achieved throughout Jambudvipa [the entire world].” (“Oko kikigaki,” Gosho zenshu, p. 816)[1] 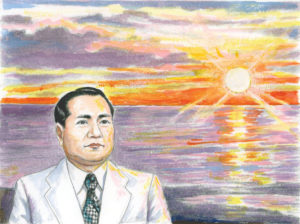 The First World Peace Conference held in Guam marked the establishment of the Soka Gakkai International (SGI), a historic moment in the advance of worldwide kosen-rufu.

The sun of peace had risen. A new curtain had lifted on worldwide kosen-rufu. On January 26, 1975, … 158 representative members from fifty-one countries and territories assembled at the Guam International Trade Center Building for the First World Peace Conference. At the conference, the Soka Gakkai International was founded as an international body composed of member organizations around the globe, and Shin’ichi Yamamoto was appointed its president at the request of all present. It was a historic turning point toward creating a century of life and of peace.

In order to realize lasting peace for all humanity, we need to instill in people’s hearts a spirit of compassion for all living beings in accord with the Buddhist principle of the sanctity of life, which itself is based on the recognition that all life inherently possesses the supremely noble and unsurpassed life state of Buddhahood. This process is what we call kosen-rufu.

Nichiren Daishonin teaches: “It is certain that widespread propagation of the Law [kosen-rufu] will eventually be achieved throughout Jambudvipa [the entire world].” Of course, that doesn’t mean that we can just sit idly by and wait for it to happen. The momentous advance of kosen-rufu can only occur if those who practice Nichiren’s teachings strive in genuine earnest to make his prediction a reality. …

Those assembled in Guam were leaders in their respective lands and champions who had risen up to fight for kosen-rufu based on a firm sense of mission. They were pioneers of the ideals of Soka. Each of them had stepped forward determined to work hand in hand in order to build the SGI into a strong citadel of peace that would bring together the peoples of the world. (The New Human Revolution, vol. 21, pp. 1–3)

“If you propagate it, devils will arise without fail. If they did not, there would be no way of knowing that this is the correct teaching.” (“Letter to the Brothers,” The Writings of Nichiren Daishonin, vol. 1, p. 501)

Exerting More Effort Than Ever Before 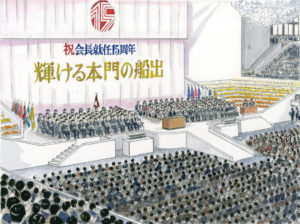 On May 3, 1975, Shin’ichi Yamamoto gave a speech at a ceremony commemorating the 15th anniversary of becoming the Soka Gakkai president.

“In our long journey of kosen-rufu, we will have rainy days and stormy days. Sometimes we will win in our struggles, and sometimes we will suffer loss. But winning should never lead to arrogance and vanity, and losing should never lead to servility. Whatever happens, let’s continue to advance boldly, steadily and cheerfully together along the path of our mission. The faster our advance, the stronger the winds of resistance. Therefore, as the Soka Gakkai continues to grow, we can only expect that various trials and tribulations will await us.

“At some point, a great and completely unanticipated persecution is certain to appear. That is why the Daishonin writes that if devils did not arise, there would be no way of knowing that this is the correct teaching (see WND-1, 501).”

These words could be considered prophetic. …

“No matter what the circumstances, come what may, I will exert ten, twenty, thirty or even fifty times the effort I have up until now to support you and the Soka Gakkai.

That’s the role of the president. I firmly believe that the president exists for your sake. Whatever happens, whatever difficulties arise, for your sake I will give my all, even if it means advancing only one or two steps. (NHR-21, 205)

Before It Is Too Late

The “Resonance” chapter of The New Human Revolution, volume 21, describes discussions between Ikeda Sensei and Dr. Aurelio Peccei, the co-founder of the Club of Rome.

In 1972, the Club of Rome issued a report titled “Limits to Growth,” which warned against the depletion of natural resources. This report drew the world’s attention to the Club of Rome.

To prevail over the crises facing humanity, such as food shortages, the degradation of natural resources and environmental pollution, Dr. Peccei argued that human beings must overcome their own ego through humanistic revolution. Through his discussions with Sensei, Dr. Peccei said, “Until now, I have worked toward advocating the idea of humanistic revolution, but on closer inspection, I’ve come to believe that it ultimately boils down to the human revolution that you speak of” (The New Human Revolution, vol. 21, p. 229).

Their discussions, which spanned over five meetings, as well as their ongoing correspondences, were compiled into a book titled Before It Is Too Late. At the end of the book, Dr. Peccei concludes:

Since the human revolution is the key to positive action leading to the adoption of a new course and the revival of human fortunes, we must do whatever is in our power to help set it in motion—before it is too late. (Before It Is Too Late, p. 147)

As the COVID-19 pandemic continues, and we face issues such as climate change, large-scale disasters and other difficulties, we can say that now is the time to pray and act for the happiness of all people as we challenge our own human revolution.

Illuminate the World With the Sun of Your Youthful Vow