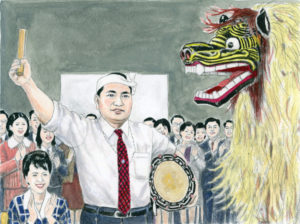 The Soka Gakkai had designated 1972 as the “Year of the Community,” and members worked hard to build a base for actualizing a peaceful society through the spread of Nichiren Buddhism on the local level.

Based on the resolve that all the members would establish a pillar of sound and indestructible faith in their hearts, Shin’ichi Yamamoto attended a New Year’s Day meeting at the Soka Gakkai Headquarters, and on January 2, he participated in the first nation-wide university group general meeting.

Also, in order to strengthen and ensure that sub-blocks—the smallest organizational unit, equivalent to the group level—were filled with hope and joy, Shin’ichi poured all his energy into taking commemorative photographs with the men’s and women’s division sub-block leaders who were working on the front lines of the organization.

On January 15, Shin’ichi sat for commemorative photographs with sub-block leaders of Tokyo’s Shinjuku Ward. There he discussed the role of Shinjuku, the home of the Soka Gakkai Headquarters, and thus the Soka Gakkai’s main bastion.

In addition, he established the “January 15 Group” composed of young men with whom he took a commemorative photograph, as well as the “Shinjuku Coming-of-Age Group” with those who were celebrating Coming-of-Age Day, an annual Japanese holiday celebrated by those who would turn 20 that year.

On January 29, Shin’ichi flew to Okinawa, which had been under United States administration since the end of World War II but would be returned to Japan in May. Although it was a three-day trip, he thoroughly encouraged those who were striving on the front lines.

After returning to Tokyo, he continued to encourage the members by holding commemorative photo sessions with the members of Katsushika and Arakawa, and at the session with the Chiyoda members, he established the “Chiyoda 750 Group.” Moreover, he continued to pour his heart and soul into encouraging the members in the Kanto and Kansai regions. Seeking to respond to him, champions of the people appeared everywhere he went. 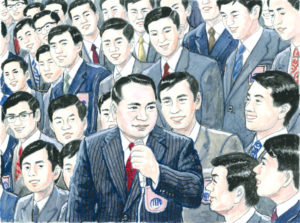 In 1972, designated the “Year of the Community,” Shin’ichi Yamamoto held commemorative photo sessions with frontline leaders in numerous locations. At one session held in January in Shinjuku, Tokyo, Shin’ichi discusses the way of life for youth with members of the young men’s division.

Shin’ichi continued: “One of the things I decided in my youth was that, having resolved to dedicate my life to kosen-rufu, I would never complain about it, no matter what. Constructive ideas are important, but griping and grumbling don’t lead anywhere. … In addition, complaining is like advertising that we are pitiful, weak and powerless, and it demeans our value and character.

“Grumbling also discourages those around us, dampening their enthusiasm and their energy to advance. It therefore erases our benefit and good fortune. The Daishonin says that when difficulties arise, ‘The wise will rejoice while the foolish will retreat’ (“The Three Obstacles and Four Devils,” The Writings of Nichiren Daishonin, vol. 1, p. 637). Let’s face everything that comes to us with composure and take vig-orous and courageous action.”

The young men smiled and nodded.

“Some of you may live in apartments that receive no sunlight or are tiny, cramped single rooms. It was the same for me when I was young, particularly during the time when [second Soka Gakkai President Josei] Toda’s business was floundering and the Soka Gakkai was in danger of falling apart. I would return home to my apartment utterly exhausted, but the place was freezing, and there was nothing to eat. I didn’t even have a cup of tea to warm myself.

“Nevertheless, I fought with undaunted ferocity at President Toda’s side. I pushed myself to the limit each day, working and struggling so hard that sometimes I wanted to cry out in agony. But I carried on with the unbending will to win day after day and created a string of solid victories. Those hardships became the greatest assets of my life.”

“Youth is fleeting. It passes by in an instant. If you try to escape its challenges, you’ll find it’s over before you know it. I therefore hope you will have courage and throw yourselves earnestly into kosen-rufu and Soka Gakkai activities!” 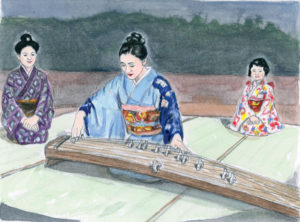 At the end of January 1972, Shin’ichi visited Okinawa. At a commemorative photo session held at the construction site of the Nago Community Center, Katsuyo Naka, a member of the young women’s division who had lost her eyesight, per-formed on the koto. She was among the members that Shin’ichi encouraged at Nago Beach during his visit three years prior.

Katsuyo never forgot Shin’ichi’s words on that occasion: “I assure you, if you persevere with faith until the very end, you will definitely become happy. Some people, when they experience a series of unfortunate events, decide that they are unlucky and powerless, and they extinguish the flame of hope in their hearts. But such an attitude itself is a source of misery. … Please open the ‘eye’ of faith, the ‘eye’ of the heart, and live out your life vigorously and positively. If you can do that, you will bring hope and courage to countless others. Please become a beacon to many, many people.”

Hearing those words, Katsuyo felt the sun of hope rise in her heart. …

In the evening, after receiving guidance from Shin’ichi, Katsuyo returned home and began chanting. She felt genuine happiness welling up from within. I am blind, she thought, but because of that I was able to encounter the Gohonzon. And I still have my voice with which I can speak to others about Buddhism and chant. I also have legs that enable me to get around. … How fortunate I am! …

Chanting with a spirit of gratitude, Katsuyo made a firm vow to the Gohonzon to develop into a person who could contribute to kosen-rufu. …

And now she was playing with all her heart for President Yamamoto on the site of the future Nago Community Center.

When her performance was over, Shin’ichi was the first to applaud. The sound of his clapping resounded powerfully within her. “Thank you, Sensei!” she called out to him silently. …

Later, in 1999, she was designated an intangible cultural treasure by Okinawa Prefecture for her achievements as a master of Okinawan traditional music in the koto category. Katsuyo had fulfilled her vow. She had won. (NHR-16, 75–78)

When one person finally stands up in faith, those who rejoice the most and receive the greatest benefit are that person’s friends, the people who have cared, chanted and done everything to support that person. (NHR-16, 14)

It’s important to be optimistic and to look on the bright side, constantly moving forward. There are times when, even though you’ve been chanting for something, the situation doesn’t go as you wish. But remember, there’s always a reason. In the end, you will genuinely feel that things worked out for the best. (NHR-16, 28)

What is our foremost treasure, of which we can be proud to the entire world? It is the women’s division. Nowhere else can you find a gathering of women dedicated to justice and the happiness of the people that is as pure and strong. (NHR-16, 54)