February 11, 2020, marked the 120th anniversary of second Soka Gakkai President Josei Toda’s birth. In a recent essay (published in the Seikyo Shimbun[1] on February 7, 2020), SGI President Ikeda writes that when he met and conducted dialogues with leading thinkers of the same generation as Mr. Toda in the later years of their lives, they all expressed their great hopes that the SGI would build a hope-filled future.

A great number of President Ikeda’s dialogues with academics and intellectuals born in the same era as his mentor have been published in book form, including Human Rights in the Twenty-first Century with Brazilian Academy of Letters President Austregésilo de Athayde, Dawn After Dark with French art historian René Huyghe and A Lifelong Quest for Peace with Dr. Linus Pauling, a two-time Nobel laureate in chemistry and peace.

At the very outset of President Ikeda’s journey of wide-ranging dialogues were his conversations with one of the greatest historians of the 20th century, professor Arnold J. Toynbee [which took place over 10 days in London in May 1972 and May 1973]. March 2020 marks 45 years since their dialogue, titled Choose Life in English, was published in Japanese.

The “Dialogue” chapter in volume 16 of The New Human Revolution details the conversations between Dr. Toynbee and Shin’ichi Yamamoto. The age difference between Shin’ichi and Dr. Toynbee, who was about 10 years older than President Toda, meant they could have been father and son. Shin’ichi accepts Dr. Toynbee’s invitation to conduct a dialogue with him as he feels that “perhaps Mr. Toynbee had chosen him specifically in order to bequeath his spiritual legacy to the 21st century.”[2]

Shin’ichi recognizes an urgent need for “the concerted efforts of the world’s best minds” and for “discussion and the exchanges of ideas among such people”[3] in order to offer humanity a clear path toward peace within the final three decades of the 20th century.

Their dialogues cover a wide range of topics, including discussions on the role of religion. Dr. Toynbee expresses his opinion that threats to human existence can only be overcome through “a spiritual revolution on the individual level,”[4] conveying his great hopes for the movement of human revolution promoted by the Soka Gakkai.

In his work An Historian’s Approach to Religion, Dr. Toynbee discusses the reasons for Christianity’s extensive spread throughout the world. He points out that dedication to the needs of the masses helped establish a solid foundation in the early years of the religion, which in turn resulted in its rapid expansion.

In the same way, the foundation for the worldwide spread of the Soka Gakkai was built upon the countless dramatic experiences of ordinary members in the pioneering days completely turning their lives around, despite being ridiculed as “a gathering of the sick and poor.” They considered this their greatest pride.

Dedication to the happiness of ordinary people is the unchanging commitment of the Soka Gakkai. No matter how the times may change, we must never forget this fundamental point.

Always Thinking of the Members

Certain that the year 1972 was to become an “extremely important year in determining the direction of the magnificent flow of kosen-rufu,”[5] Shin’ichi Yamamoto dedicates his entire being to encouraging his fellow members. The “Heart and Soul” chapter gives a detailed account of his endeavors.

On January 2, 1972, the first general meeting of the various university groups [comprising students and alumni of specific universities] is held. Recognizing that most of the participants would be in their 50s by the start of the 21st century, Shin’ichi asks them to shoulder responsibility for the future development of kosen-rufu: “I entrust the 21st century to you. That time will be decisive.”[6]

On January 15, Shin’ichi attends a commem-orative photo session in Tokyo’s Shinjuku Ward, which takes place in 13 sittings. In between these sittings, he continuously encourages the members. Addressing youth celebrating Coming-of-Age Day,[7] he declares: “Whatever happens, it’s important that you never abandon your faith in the Gohonzon or leave the Soka Gakkai. They are the way to true happiness.”[8]

Shin’ichi is constantly thinking about what he can do to inspire the members, to help them develop into capable and trustworthy leaders, and to ensure that no matter what happens, they continue to walk the path to absolute happiness, never abandoning their faith. The underlying spirit at the core of his actions is the oneness of mentor and disciple, for President Toda’s voice resounds constantly within his heart.

As President Ikeda writes, “As long as we are able to keep the example of our mentor alive in our hearts, we can triumph over our personal weaknesses.”[9] When Shin’ichi visits Okinawa in January 1972, he encourages one of the leaders:

Those who walk the path of mentor and disciple of kosen-rufu will never find themselves at an impasse. Through my experience, I have concluded that when you are completely united in spirit with your mentor, unlimited strength wells forth.[10]

Shin’ichi gives his all to engrave the spirit of mentor and disciple in the heart of each person he encounters. Aligning our hearts with our mentor, let’s advance while continuing “a daily dialogue in our hearts”[11] with our mentor.

The “Soaring” chapter records the history of the Grand Main Temple,[12] which was completed in October 1972. With its completion, the Soka Gakkai entered the second phase of the kosen-rufu movement.

Some years before, at the ground-breaking ceremony [held on October 12, 1967], Shin’ichi Yamamoto concluded the official vow by sharing his profound resolve for kosen-rufu:

We, the disciples of Nichiren Daishonin in the Latter Day of the Law, firmly pledge to do our utmost to spread the teachings of Buddhism day by day, month after month, and year after year.[13]

In his speech at the completion ceremony [on October 1, 1972], Shin’ichi further emphasizes that the Grand Main Temple is “not a symbol of religious authority but a facility existing for the sake of the people.”[14] He goes on to say that it would be “a religious palace of the people where prayers based on respect for the dignity of life would be offered.”[15] In other words, the Grand Main Temple was built for the people, and its fundamental purpose was solely the realization of kosen-rufu.

Just 26 years after its completion, the Grand Main Temple was demolished by Nikken,[16] blatantly trampling on the sincerity of 8 million believers and all who had contributed to the temple’s construction. Although it no longer stands, the benefit and good fortune accumulated by the Soka Gakkai members who sincerely offered donations is “boundless and everlasting.”[17]The Soka Gakkai’s current advance as an international Buddhist organization is a testament to this fact.

In November 2013, the Hall of the Great Vow for Kosen-rufu in Shinanomachi, Tokyo, was completed. President Ikeda’s dedication inscribed on the monument that stands in the hall’s entrance lobby reads:

This lofty citadel, dedicated to the shared vow of mentor and disciple, is a place for offering our profound prayers for the realization of a peaceful world through spreading the humanistic teachings and ideals of Nichiren Buddhism. It is a place for resolving anew to triumph in our personal human revolution, undaunted by all obstacles and challenges, and to help others do the same.[18]

The purpose of the Hall of the Great Vow for Kosen-rufu is for the members to visit and pray for world peace and the happiness and security of ourselves and others, as well as to affirm their vow for kosen-rufu. This is also the significance of the gongyo meetings held there.

In his message to the commemorative gongyo meeting marking the completion of the Hall of the Great Vow for Kosen-rufu [held on November 8, 2013], President Ikeda says:

The heart of the great vow for kosen-rufu and the life state of Buddhahood are one and the same. Therefore, when we dedicate our lives to this vow, we can bring forth the supreme nobility, strength and greatness of our lives.[19]

Regardless of the age, there can be no greater joy or honor than living our lives based on the vow to strive in unity alongside our mentor, the Soka Gakkai and our fellow members.

Translated from the February 26, 2020, issue of the Seikyo Shimbun, the Soka Gakkai’s daily newspaper. 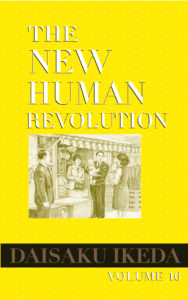 Heart and Soul
From the start of 1972, Shin’ichi Yamamoto gives guidance to university students and members in various wards of Tokyo, as well as members in Okinawa and other prefectures.

Dialogue
Shin’ichi embarks on a tour of Europe and the U.S. In May, he meets with the British historian professor Arnold J. Toynbee at his home in London. Their dialogue covers various topics, including the nature of civilization and religion, and spans some 40 hours over a two-year period. It is later published in English under the title Choose Life.

Soaring
In July, Shin’ichi encourages members in areas affected by torrential rains. On October 12, the Grand Main Temple is completed. Twenty-six years later, it is demolished by Nikken, who falsely claimed legitimacy as the 67th high priest of Nichiren Shoshu.