Living Buddhism: Thank you, German, for sharing your experience with us. Also, thank you for all of your efforts as a healthcare worker on the front lines during the COVID-19 pandemic. To start, can you tell us about your upbringing?

German Rivas: I’m so honored to share my experience with everyone. Thank you so much for this opportunity.

I grew up with a single mother in San Salvador, El Salvador. My mom did everything she could to support the family, and thanks to her, I had a pretty normal life.

When I was 8 years old, my mom met a new partner and had my younger sister. At first, he seemed very trustworthy, but he became physically abusive. For years, we struggled with this.

That’s when my mom was introduced to Nichiren Buddhism and the SGI by a co-worker she didn’t know. Despite the random encounter, she sincerely gave chanting Nam-myoho-renge-kyo a try and received the Gohonzon in 2007.

From there, we were able to separate from our abusive stepfather—something we couldn’t do before. When I saw our lives change, I knew this Buddhism worked. 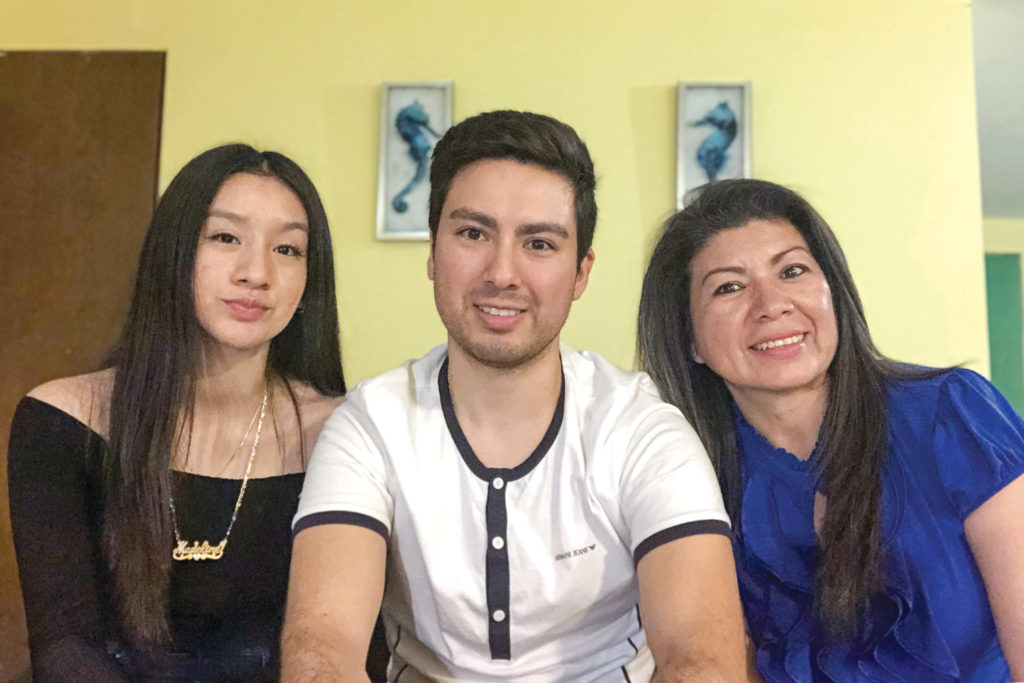 German Rivas with his mother, Sandra Guerra, and sister, Madeline Marroquín, in their home in Lake Worth, Florida. Photo by Maria Ramos.

Amazing! What was it like to practice Buddhism then?

German: In our city, houses are very close to each other so our neighbors would hear us chanting. They would often ask us what we were doing, and there were rumors that we were involved in some witchcraft. One neighbor told us we should return to Christianity because what we were doing was wrong.

Also, around that time, our community began changing for the worse. Two gangs began fighting over territory, and our neighborhood was caught in the middle. They monitored the streets with guns and closely watched people come and go. We held discussion meetings at a public venue, which was considered “neutral” territory, but public transportation was also dangerous. At times, people were robbed at gunpoint on buses.

Still, 20 to 30 members from all over gathered to study The Writings of Nichiren Daishonin and Ikeda Sensei’s encouragement, and share our experiences. To me, they were like family gatherings, and it was our safe space. Together, we went out and challenged to share this Buddhism with others, despite the deep influence of other religious traditions. We encouraged one another that Bodhisattvas of the Earth were out there waiting to be awakened.

It’s very courageous of you and your family to practice amid such circumstances. What led you to America?

German: The gang violence continued to escalate, and there were gunshots every night. Our neighbor went to visit a friend in a rival territory to use their printer, and he was surrounded by gang members and killed on the spot. It reached the point where we couldn’t even visit our neighbor’s home because of where they lived.

One day, when we tried visiting our grandmother’s home down the street, we were stopped by gang members. They interrogated my mom, and no matter how we explained ourselves, it didn’t matter. We were put on their target list, and our lives were at risk.

That’s when we had no choice but to escape to America in July 2014. We were pained by leaving our family back home, but we were relieved to be away from the violence.

How did you rebuild your life here?

German: Adjusting to life here was extremely difficult. We couldn’t speak English and people treated us differently. We didn’t have any work or transportation. We also had difficulty finding and reconnecting with the SGI community.

Still, we continued to chant as a family. We kept in mind Nichiren’s passage, “Those who believe in the Lotus Sutra are as if in winter, but winter always turns to spring” (“Winter Always Turns to Spring,” WND-1, 536). We were determined to establish a happy life.

We took whatever jobs we could get, and with the help of friends here, we started building a case for receiving asylum. It was difficult without a computer and with the language barrier, but we gathered all the necessary evidence and documents.

Even with all this effort, our lawyer shared we would most likely lose this case because of various laws working against us. As our fate hung in the balance, at the end of 2018, we reconnected with the SGI. With our SGI family, kosen-rufu activities and access to Sensei’s encouragement, we felt more confident amid this process. Just being among members gave us hope to keep going.

On the day of our court date, we were absolutely amazed when the judge told us our case was accepted. It turned out that our lawyer who seemed hopeless about our case was actually fighting for us the whole time. In November 2019, we were granted asylum. We can only say that it was the power of our faith and prayer to the Gohonzon.

Congratulations, what a victory! Can you share what’s been going on since then?

German: Education was the big wall ahead of me. Before coming here, I was going to a university, but now I was back to square one, struggling with the language barrier.

When I first applied for college, I failed the entrance exam. My mom encouraged me to go back to the Gohonzon and chant until I had the courage to try again. With her support, I got into college in the spring of 2018.

Between working to support the family and taking night classes, things became overwhelming. But shortly after our family reconnected with the SGI, I was inducted into the Young Men’s Division Academy.

When I saw all these young men fighting toward a common goal and challenging various difficulties, it made me realize I could win, too. I grew confident that if I contributed to kosen-rufu, my life would absolutely move forward in the best way.

Whether it was taking part in May Contribution or doing Gajokai, the young men’s behind-the-scenes training group, I felt so much joy in supporting others. Having missed years of SGI activities, I just soaked up any and all encouragement. With this amazing support, I’m now on course to finish pre-med school this fall, while working as a medical assistant in a doctor’s office within the hospital.

That’s great to hear. Amid the COVID-19 pandemic, how did you use your Buddhist practice to persevere as a medical assistant?

German: Every day, the staff is faced with an overwhelming amount of uncertainties. There are so many patients and so much demand. The moment we put on the protective gear, we have anxiety—there’s no time to stop from there.

Even at home, I’m worried about the potential of exposing my family. I have to take every precaution, leaving my clothes outside and immediately taking a shower. That’s why I begin every morning chanting earnestly to the Gohonzon for the health and security of my family and everyone.

A co-worker shared that I’m the only who wants to be at work. In response, I shared that I pursued the medical field because I wanted to help others—it’s my mission in life. And, I share with them that my Buddhist practice gives me the tools to build a strong state of life where I can feel enthusiasm even in difficult times.

Of course, it’s difficult to stay positive all the time, but I take a deep breath, go back out there and do my best. Plus, the Zoom videoconferences with other young men’s division members and seniors in faith always take me out of my anxiety and encourage me to never give up.

Thank you, again, for all that you do. How do you create hope during these difficult times?

German: Sensei has taught me that hope begins with a conversation. What I admire most about him is his ability to connect with each and every person—how he treats and encourages everyone in a manner that moves them.

I remember he wrote, “The swan that seems to be gliding effortlessly across the water is actually paddling very hard beneath the surface” (July 2016 Living Buddhism, p. 7). I realized I had to have a strong, stand-alone spirit in order to connect with and encourage all kinds of people.

I make sure to go to work with a high life condition and try to have meaningful, and sometimes humorous, conversations with those around me. But at times, I do face racist remarks because of my accent.

Once while helping a patient, she was offended that I was helping her—she felt things would be better if we were separated by race. Thanks to my Buddhist practice, I maintained a calm tone and continued to talk with her without caving into anger. I simply shared my views and the struggles it took to be here. While I may not have changed her mind, she was at least appreciative of my help in the end.

There are other times, too, where people categorize immigrants negatively or intimidate us. But I personally want to fight the division in society, and I believe empathy is key. I may not agree with their views, but because I understand what it means to struggle as a human, I try not to judge them. I use dialogue instead.

And as a newly appointed chapter leader, I hesitate to reach out to people I don’t know too well. But I chant and remember that, just as I need encouragement, other young men do, too. So, I challenge myself and reach out to the young men in my chapter, and I’m determined to continue making these efforts.

Thank you, German. What are your determinations in this significant year?

German: I owe so much to the SGI, Sensei and to this Buddhist practice.
Today, our family enjoys a bright and warm atmosphere at home, and we’re supportive of one another. My life has opened up, and I’m so happy and excited.

The COVID-19 situation became an unexpected obstacle toward graduating and applying to school, but I’m not giving up. I’m determined to get into a university this year and advance toward my dream of becoming an anesthesiologist.

Most of all, I want to overcome all barriers in my life. I tend to be shy, so I want to live with more courage and communicate with others openly. I want to inspire others through my own example, and prove that we are all born with infinite possibilities. None of us are stuck in unhappiness—we have the power to change it.

That’s why I’m doing my best to share Buddhism with others. It’s a big step for me to open up my life even more and share with others who I am. I’ve talked with many people about Buddhism already, but I really want to inspire one youth to begin their practice this year and see benefits in their life.

I still have challenges day to day. But to transmit hope to others, I have to have hope first. My experiences have taught me that what Nichiren teaches is absolutely true: Winter does turn to spring.

This interview was conducted in April 2020.

“I Vowed to Overcome These Problems Through Faith”

A Contributive Life Is a Joyful One