by Mitch Bogen
Special to the World Tribune

Cambridge, Mass.—Undaunted by the ongoing restrictions of the coronavirus pandemic, the Ikeda Center for Peace, Learning, and Dialogue held its fourth virtual dialogue event of the year on Sept. 24. Nearly 180 participants from 19 countries joined the Zoom gathering, themed “Climate Hope: Awareness into Action!”

The event was inspired by Ikeda Center Founder Daisaku Ikeda’s conviction, voiced in his 2020 peace proposal, that facing large problems such
as climate change presents “a remarkable diversity of opportunities for human beings to give expression to their limitless potential.”[1] 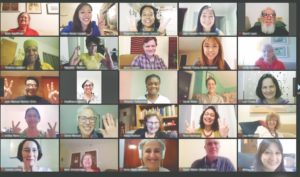 The heart of the dialogue was an intergenerational panel discussion among scientist Breea Govenar, young professional Parul Kashyap and high schooler Victoria Torkornoo—all of whom had studied Mr. Ikeda’s proposals addressing climate change.

Ms. Kashyap brought to attention the wildfires in her home state of California, saying that responses to such environmental crises have become overly politicized, overshadowing the fact that we share a common task of “sustaining humanity.”

Dr. Govenar said that Mr. Ikeda’s 2014 peace proposal helped her see that in the context of climate change, resilience is not about returning to “what we think of as normal” but rather advancing toward a more sustainable and peaceful world.

Ms. Torkornoo shared that climate hope calls for each individual to take what actions they can while speaking up and dialoging with others about a shared vision for climate solutions.

After virtual break-out sessions, Jason Goulah—the Ikeda Center executive advisor and director of the Institute for Daisaku Ikeda Studies in Education at DePaul University—concluded the evening by reminding everyone of Mr. Ikeda’s emphasis on human revolution and the wisdom of always keeping our focus on “what the human being can do.”

Visit ikedacenter.org for a full report on the event, or watch it on their YouTube channel (Ikeda Center).

Proudly Advancing on the Great Path to Victory