Ikeda Sensei sent the following message to the 47th Soka Gakkai Headquarters Leaders Meeting of the New Era of Worldwide Kosen-rufu, held on Nov. 1 at the Hall of the Great Vow for Kosen-rufu in Tokyo. At the meeting, which commemorated the Soka Gakkai’s 90th anniversary, the theme for 2021 was announced: Year of Hope and Victory. This message was first published in the Nov. 2 issue of the Seikyo Shimbun, the Soka Gakkai’s daily newspaper.

It is our greatest joy and honor to now encounter and celebrate together the auspicious and wonderful time of the Soka Gakkai’s 90th anniversary.

I would like to express my overwhelming gratitude to each member of our Soka family in Japan and around the world. I am also chanting heartfelt daimoku [Nam-myoho-renge-kyo] for all our fellow members who have passed away after dedicating their lives to kosen-rufu over the past nine decades, as well as for all your deceased family members, friends and loved ones. 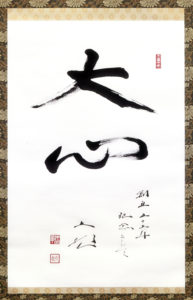 Commemorating the Soka Gakkai’s 55th anniversary on Nov. 18, 1985, Ikeda Sensei inscribed the calligraphy “Vast Heart,” referring to an expansive, all- encompassing spirit or state of life. Photo by Seikyo Press.

Today, I would like to share with you a piece of calligraphy I inscribed to commemorate the Soka Gakkai’s 55th anniversary in 1985, 35 years ago, filled with thoughts of our founding president, Tsunesaburo Makiguchi, who died in prison for his beliefs (on Nov. 18, 1944). It reads “Vast Heart” (Jpn. daishin), meaning an expansive, all-encompassing spirit or state of life.

At a time plagued by war, poverty and illness, Mr. Makiguchi declared: “Unless the human spirit is fundamentally transformed through a religious revolution, the chaos in human affairs will never be remedied.”

Boldly proclaiming the truth of Nichiren Buddhism, he helped one person after another to bring the sun of infinite courage, wisdom and compassion to shine in their hearts.

Though imprisoned in a cold, cramped cell by Japan’s militarist authorities, President Makiguchi still wrote, “Depending on one’s state of mind, even hell can be enjoyable.”[2] The spirit that characterized his momentous struggle truly resonates with Nichiren Daishonin’s words “The greater the hardships befalling him, the greater the delight he feels, because of his strong faith” (“A Ship to Cross the Sea of Suffering,” The Writings of Nichiren Daishonin, vol. 1, p. 33).

Our founding president laid down his life, leaving an example of the “vast heart” of Soka for his disciples and successors. This “vast heart” is the great, invincible spirit to keep striving together with the Mystic Law through even the bitterest adversity to transform all poison into medicine and freely create value with confidence, strength, wisdom and optimism.

Nichiren writes, “Myo [of myoho, the Mystic Law] means to revive” (“The Daimoku of the Lotus Sutra,” WND-1, 149). In accord with this principle, the life of Soka is always and everywhere one of youthful vitality, ever moving forward and opening new paths to create fresh value.

He proclaimed: “Though one might point at the earth and miss it, though one might bind up the sky, though the tides might cease to ebb and flow and the sun rise in the west, it could never come about that the prayers of the practitioner of the Lotus Sutra would go unanswered” (“On Prayer,” WND-1, 345).

As Nichiren’s true heirs, with a “vast heart” encompassing the earth, sea, sky, sun and entire universe, let us forever cherish the noblest and greatest of prayers—the prayer for kosen-rufu and establishing the correct teaching for the peace of the land—and steadily fulfill the vows we have made.

The drama of human revolution is one in which the greater our struggles and efforts for Buddhism, others’ happiness and the welfare of society, the more we are able to accumulate treasures of the heart and attain a boundless state of life filled with “the greatest of all joys” (The Record of the Orally Transmitted Teachings, p. 212), and to help others do the same.

We of the Soka Gakkai, linked by the bonds of mentor and disciple, are committed to encouraging and shining a light on each precious, uniquely talented individual. United in the spirit of “many in body, one in mind,” let us pledge together to impart great hope to our troubled world and exert ourselves bravely and vigorously to achieve the great spiritual victory of transforming the destiny of all humankind—a victory anchored in each of us developing a “vast heart.”

I am chanting Nam-myoho-renge-kyo and praying earnestly that you, my dearest fellow members, will enjoy long, healthy, fulfilling lives, peace and security, and immeasurable good fortune and benefit. Take care!

Be Wise People Who Will Achieve Victory in Your Youth

Deepest Gratitude for All Our Dedicated Medical and Healthcare Professionals