The following is an excerpt from SGI President Ikeda’s guidance in My Dear Friends in America, third edition, p. 72.

Today, Brazil is famous as a leading center of coffee production. But long ago, Brazil had no coffee at all. How then was this great coffee nation born? It can be traced back to an episode in 1727, when a Brazilian explorer from the Amazon visited coffee-rich Guiana. He was the first Brazilian to learn of coffee and was burning with a desire to plant coffee in his own country. He asked the governor-general of Guiana to give him some coffee beans to take back to Brazil, but the governor-general refused because a law forbade their export. The Brazilian was not discouraged and continued to make his request time and time again. Although he was turned down each time, he still did not give up his dream.

Just as the Brazilian was wondering what he should do, the governor-general’s wife, moved by his earnestness and zeal, slipped some coffee beans into his pocket as he was about to return home to Brazil. Brazil’s present-day coffee industry owes its origin to this single handful of coffee beans. What a dramatic history it has!

Be it a large or small event, history always seems to be made in this way. A long river begins with a single drop of water, and a huge mountain originates from a tiny speck of dust. The promise for unlimited future development lies in first nurturing just one seed—or a handful of seeds—carefully but surely over a period of time. The success of one youth, which became the starting point for Brazil’s coffee industry, in no way happened by chance.

That youth was filled with blazing integrity—never giving in, he directed himself toward his goal with passion and devotion. It is my belief that his earnest behavior moved other people’s hearts and earned him their trust and friendship. 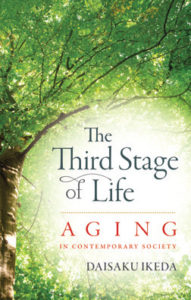 The following are SGI President Ikeda’s quotes from The Third Stage of Life.

“Though our bodies may age, by participating in SGI activities our hearts and minds remain as bright and shining as the sun. We are youthful as long as we live. Those who work for others’ happiness and for Buddhism remain vigorous and full of energy. (pp. 2–3)”

“Beethoven himself declared: “I shall seize Fate by the throat, it shall never wholly subdue me. Oh, it is good to live one’s life a thousand times!” A person who triumphs over fate lives a life ten, a hundred, a thousand times more satisfying than one who succumbs to fate without a struggle. Such an individual grows more youthful and vigorous with each passing year. (p. 39)”

“If you continue to advance on the path of kosen-rufu, life force will naturally well up from the depths of your being. As the years pass, you will grow younger and younger and live to the end of your days filled with vitality. That is what Buddhism teaches us, and that is what so many of our worthy seniors and comrades in faith have shown us through the example of their lives. (pp. 99–100)”

“There is a saying, “Laughter makes young; anger makes old.” Laughter and a sense of humor play an important part in staying in good health. If you look on the bright side of things and act positively, you’ll have a cheerful and happy life. And a happy life is a healthy life. (p. 73)”

“All of the leading figures I have met seemed to grow younger as they aged, and they were able to throw themselves more energetically into their work in their later years. This is the mark of genuine greatness. It is important to maintain
a vibrant, progressive spirit. (p. 19)”

The Women of Soka Are Bright Suns of Hope and Peace

Raising Our Youth Into Capable Champions