To mark the sixth anniversary, we are reprinting the message SGI President Ikeda sent to the commemorative gongyo meeting held on Nov. 8, 2013, for the completion of the Hall of the Great Vow for Kosen-rufu, in Shinanomachi, Tokyo. This message first appeared in the Nov. 9, 2013, issue of the Seikyo Shimbun, the Soka Gakkai’s daily newspaper.

Congratulations, everyone! I am so happy that all of you—great leaders of kosen-rufu from throughout Japan and 85 countries and territories around the world—could gather for this gongyo meeting commemorating the completion of this new building.

Visitors to this magnificent edifice are greeted by eight pillars that line both its southern and northern sides.

In The Record of the Orally Transmitted Teachings, Nichiren Daishonin states:

In [“Encouragements of the Bodhisattva Universal Worthy,” the 28th chapter of the Lotus Sutra,] Shakyamuni Buddha revealed the foremost point he wished to convey to us. The Buddha preached the Lotus Sutra over a period of eight years, and eight characters sum up the message that he has left behind for living beings in this later age, the Latter Day of the Law. [This eight-character passage reads:] “You should rise and greet them from afar, showing them the same respect you would a Buddha.” (see p. 192)

The Daishonin further clarifies the message of these eight characters as “one should without fail show the practitioners of the Lotus Sutra the kind of respect one would show to a Buddha” (OTT, 193). 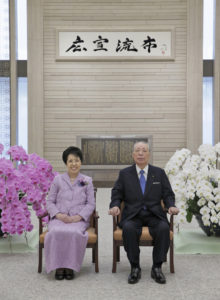 SGI President and Mrs. Ikeda in the lobby of the Hall of the Great Vow for Kosen-rufu, seated in front of a calligraphy that reads “Kosen-rufu,” November 5, 2013. Photo by Seikyo Press.

The eight pillars on the north and south sides of this building, therefore, symbolize this eight-character passage that expresses the heart of the Lotus Sutra, which is also the Soka Gakkai spirit of treasuring each member as if he or she were a Buddha. I share this with you today for the sake of future generations.

On the occasion of this auspicious first gongyo meeting in this new hall, here before the Soka Gakkai Kosen-rufu Gohonzon, we the members in Japan wish to rise and give a rousing round of applause to all of you, the noble SGI leaders who have gathered from throughout the world. We do so with the same respect one would show a Buddha. [The Japanese members stood up to applaud the visiting SGI leaders from throughout the world.]

Three days ago [on Nov. 5, 2013], I solemnly presided over the Gohonzon-enshrining ceremony in this hall together with President Harada and other senior Soka Gakkai leaders.

This year marks 70 years since the Soka Gakkai’s first and second presidents, Tsunesaburo Makiguchi and Josei Toda, were arrested and imprisoned by the wartime Japanese militarist authorities [in July 1943] for refusing to compromise their beliefs. The completion of this grand and stately hall on this significant milestone is an indisputable testimony to the victory of the mentors and disciples of Soka.

Calling to mind my two great mentors and imagining how happy this event would surely make them, I offered prayers to repay my profound debt of gratitude to them.

In addition, I sent daimoku [Nam-myoho-renge-kyo], filled with the deepest appreciation, to all the dedicated members who have worked alongside me, sharing joys and sorrows together, to achieve the phenomenal development of our Soka movement today, undefeated by the repeated onslaughts of the three obstacles and four devils. I also offered my most sincere prayers for all my treasured friends who have passed away in the course of our journey for kosen-rufu.

The heart of the great vow for kosen-rufu and the life state of Buddhahood are one and the same. Therefore, when we dedicate our lives to this vow, we can bring forth the supreme nobility, strength and greatness of our lives.

The renowned master of modern architecture Le Corbusier (1887–1965) declared: “As a just reward, architecture will bring a special happiness to those who have given her their whole being.” Similarly, all those who have worked earnestly to realize the construction of a lofty edifice will also savor a sublime joy on its completion.

There will probably be members who, because of health, age or other reasons, will not be able to come to this hall. But please remember that all of us who have exerted ourselves for kosen-rufu and contributed to the development of today’s Soka movement have definitely accumulated boundless and immeasurable benefit and good fortune in our lives, and constructed a brilliant inner palace of eternity, happiness, true self and purity that will endure across the three existences of past, present and future. We all share the same benefit and joy. Please have complete confidence in this.

During his life-threatening exile on Sado Island, the Daishonin declared: “I will make a great vow” (“The Opening of the Eyes,” The Writings of Nichiren Daishonin, vol. 1, p. 280). He pledged to be the pillar, the eyes, the great ship that would save all people from suffering, praying single-mindedly for the realization of kosen-rufu. The “great vow” he made is none other than the great vow for the propagation of the Lotus Sutra—that is, the great vow for kosen-rufu.

Seven centuries after Nichiren first proclaimed his teaching, the Soka Gakkai appeared in modern times—at the very height of this age of conflict that is the Latter Day of the Law—taking upon itself the mission to accomplish the great vow for kosen-rufu in exact accord with Nichiren Daishonin’s spirit. It is truly the organization carrying out the Buddha’s will and decree.

The heart of the great vow for kosen-rufu and the life state of Buddhahood are one and the same. Therefore, when we dedicate our lives to this vow, we can bring forth the supreme nobility, strength and greatness of our lives. When we remain true to this vow, the limitless courage, wisdom and compassion of the Buddha flow forth from within us. When we wholeheartedly strive to realize this vow, the “poison” of even the most difficult challenge can be transformed into “medicine,” and karma transformed into mission.

This is the spirit of our infinitely worthy members. This is the hallmark of our invincible humanistic network of Soka.

As President Toda’s true disciple, I protected this Gohonzon in the Mentor-Disciple Hall of the former Soka Gakkai Headquarters building, and went out into the world to make the “fulfillment of the great vow for kosen-rufu through the compassionate propagation of the great Law” a reality.
President Makiguchi, who resisted wartime militarism and died in prison for his beliefs, had vowed to realize the Daishonin’s ideal of “establishing the correct teaching for the peace of the land.” Making his vow my own, I began and developed a diverse global network of people committed to
the values of peace, culture and education.

I chanted constantly before this Gohonzon, praying for the happiness, health and longevity of all our members and for them to successfully carry out their human revolution and attain Buddhahood in this lifetime. And, looking toward the distant future of our movement, I continued my efforts to create a solid and unending flow of capable successors and took decisive leadership to thoroughly ensure the eternal perpetuation of the Law.

And now this time has come, and we are able to see the long-awaited completion of this towering citadel of mentor and disciple.

This is truly a golden place of assembly like that described in the Lotus Sutra, as Bodhisattvas of the Earth from around the world joyously gather to chant before the Soka Gakkai Kosen-rufu Gohonzon enshrined here—causing the life state of Buddhahood that is one with the great vow from time without beginning to shine forth brightly like the morning sun—and make a fresh departure with brand-new energy and commitment.

Stones collected from all 47 prefectures of Japan and from 192 countries and territories around the world have been placed in the base of the altar.
Our prayers encompass our local communities and the entire world.

This hall is a place where world citizens of the Mystic Law gather together in rich diversity to “chant Nam-myoho-renge-kyo with the spirit of many in body but one in mind, transcending all differences among themselves to become as inseparable as fish and the water in which they swim,” just as Nichiren describes in “The Heritage of the Ultimate Law of Life” (WND-1, 217). It is a jeweled tower of unparalleled human harmony where members warmly support and encourage one another as they pledge anew to keep exerting themselves bravely and vigorously for the happiness and security of the people, the flourishing of society, the realization of world peace and the transformation of the destiny of all humankind.

I, therefore, propose that, from this day forward, this hall be called the Hall of the Great Vow for Kosen-rufu, and that we joyfully initiate a fresh dynamic advance, spreading hope and justice, toward a new era of worldwide kosen-rufu. What do you say? [The audience responded with enthusiastic applause.]

The Daishonin writes, “This is my vow, and I will never forsake it!” (“The Opening of the Eyes,” WND-1, 281). Taking to heart the spirit embodied in this new hall, let us promise one another, as fellow members of the Soka family, to always keep our vow for kosen-rufu burning brightly in our hearts. Let us be determined to overcome all obstacles and lead lives of indestructible victory and complete fulfillment as we make our way together in harmonious unity and high spirits! WT

“I Will March Forward” Toward My Dream

“I Want to Show Human Capacity”