by Mitch Bogen
Special to the Tribune

The Ikeda Center’s 14th annual Ikeda Forum for Intercultural Dialogue, held on Nov. 30, hosted three leading scholars and more than 100 Boston-area engaged citizens for an exploration of the topic: “How Do We Practice Human Rights? A Dialogue on Dignity and Justice in Daily Life.” 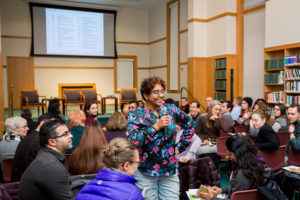 In her welcoming remarks, Ikeda Center Executive Director Virginia Benson said the event was inspired by SGI President Ikeda’s conviction that human rights and human rights education present nothing less than what he has called a “blueprint for life.” Particularly, she pointed to President Ikeda’s recommendation that we build a grassroots movement for a culture of human rights, and that youth are key to this effort, given their “special aptitude for sharing what they have learned about human rights with others in their lives” (from President Ikeda’s 2018 Peace Proposal at www.daisakuikeda.org).

On hand to offer their insights on human rights education and the practice of human rights in everyday life were scholars Elora Chowdhury of University of Massachusetts Boston, Catia Confortini of Wellesley College and Jason Goulah of DePaul University.

Building a human rights culture begins . . . by recognizing the fundamental dignity of everyone.

A key point that emerged from their panel discussion was that building a human rights culture begins where we are by paying attention to people who are marginalized or “invisible,” and by recognizing the fundamental dignity of everyone.

Attendees engaged in a youth-led dialogue exercise, where they took on the role of a marginalized person and reflected on that person’s life experiences, including how their human rights—such as the right to adequate living standards and freedom from discrimination—might have been violated.

At the end of their discussion, participants were asked to share their own determinations to strengthen human rights in their everyday lives. Some highlights included: Speak up to those who have an “us versus them” mentality! Make connections with people different from you! Treat others how you would want to be treated! And, finally, where there is love, human rights begin!

Founded by SGI President Ikeda in 1993 in Cambridge, Mass., the Ikeda Center’s mission is to build cultures of peace through learning and dialogue. Visit ikedacenter.org.

Passing on the Spirit of Faith