SGI members worldwide are earnestly studying SGI President Ikeda’s novel The New Human Revolution to eternalize the mentor’s teachings and transmit them to future generations. To that end, the World Tribune has begun reprinting President Ikeda’s essays from “Thoughts on The New Human Revolution.” This essay was originally published in the April 8, 1998, issue of the Seikyo Shimbun, the Soka Gakkai’s daily newspaper.

Beauty unites humanity all around the world.

Recently, the Val de Bièvres Photo Club in France presented me with a Diploma of Photographic Art and made me an honorary member. The club was founded in 1949 by Mr. Andre Fage and his father, Jean. It is a well-respected and prestigious international cultural organization, whose aim is to create a worldwide network of amitié, or friendship, through the art of photography. I will regard it as an unsurpassed privilege if I am able, in some small way, to share in the work of spreading such a noble ideal as friendship around the world.

In a discussion I had with Mr. Fage when we met several years ago, I learned that the great French writer Victor Hugo was a keen aficionado of photography. Mr. Fage was kind enough to show me a rare photograph that Hugo had taken during a sojourn in Bièvres, a town on the outskirts of Paris.

Hugo was later driven into exile by the dictator Napoleon III. During his 19 years abroad, he took several photographic self-portraits and sent them back to France.
The photographs were an announcement of sorts to the enemies who had plotted his downfall: “I’m still here hale and hearty as ever!” Taking photographs, too, can be an unceasing spiritual struggle. 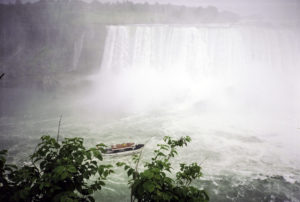 As I recall, the first time I took up a camera was about 1970. I was feeling a bit run down from overwork, and a friend gave me a camera, hoping it would provide a break of sorts from my normal routine. I wanted to show my appreciation for the gift by sending him a photograph I had taken, and so little by little I began to learn the art of photography.

In June 1971, a group of members and I were driving at night down a road along the edge of Lake Onuma in Hokkaido [Japan]. Though the night was pitch dark, there was a mysterious light coming from behind the distant mountains. One of my colleagues suggested it might be the lights of the nearby city of Hakodate, but I didn’t think so.

We drove toward the light. Suddenly, we found ourselves staring up at a huge and brilliant moon. Its beauty took my breath away. On the lake’s surface, the moon shimmered in gold and silver waves, creating a scene of magical beauty.

“This moment will never come again!” I thought, and I quickly grabbed my camera and snapped the shutter.

As my “Dialogue With Nature” accumulated over the years, it eventually took form as an exhibition of my photographs that has traveled within Japan and around the world. I am humbled to have so many people view my work, but at the same time, I am happy if my photographs have given others the opportunity to commune with Nature themselves, and have enriched, to even the smallest degree, their experience with the beautiful world around us.

Nichiren Daishonin writes that “a single person in the course of a single day has eight hundred million four thousand thoughts” (“On the Attainment of Buddhahood by Women,” The Writings of Nichiren Daishonin, vol. 2, p. 307). The human heart is a fragile, ever-shifting thing, but Nature stands majestic and immovable, providing us with a mirror in which to view our own lives.

The “Robert Capa Retrospective Exhibition” is presently on display at the Tokyo Fuji Art Museum. Robert Capa was one of the greatest photojournalists of the 20th century. His work documents the terrible and repeated tragedy of war from the battlefield, the front line of life and death.

Cornell Capa, Robert Capa’s brother, founded the International Center of Photography in New York, to carry on his brother’s mission. I have spoken with him on several occasions. On one of them, I said, “I believe what motivates the photographer is a love of each irreplaceable moment, a love of life.” I also asserted, “Beautiful works of art cannot be created by a person whose life has grown soft through idleness and laziness.”

Nichiren tells us that “life does not go beyond the moment” (“Embracing the Lotus Sutra,” The Writings of Nichiren Daishonin, vol. 1, p. 62). Buddhism focuses on this single moment of life. The great life entity of time without beginning is also contained in this fleeting, transitory life moment. We cannot postpone life to some vague future date; it is the here and now that counts and upon which all depends.

The renowned Russian physicist Dr. Anatoli Logunov, who was in Japan recently, said to me: “What makes you so strong, President Ikeda, is that you’ve never had time for a moment’s pause. That, I feel, is the key to your strength.”

The struggle to propagate Buddhism never stops for an instant. As the Lotus Sutra says, “This, a Buddha’s work, I have never for a moment neglected” (The Lotus Sutra and Its Opening and Closing Sutras, p. 267). We must devote our entire beings to this great undertaking with all our passion and energy; we must make our lives shine to illuminate that goal each second of our lives without cease. Only in that continuous effort can we walk the path toward lives of eternal brilliance and splendor. I believe that such a person can be considered a truly great photographer, a great artist, of life. WT

A boy with one hand met a soccer player with the same limb difference, and the photo went viral