With only a few days’ notice, over 300 members from eight southern states gathered on March 15, 1974, for a spontaneous guidance meeting with SGI President Ikeda at the University of New Orleans. It would be his only visit to the southeast outside Florida.

President Ikeda named the members in attendance that day the Happiness Group, encouraging them to live out their noble mission to become happy and spread trust in their communities and society at large (see sidebar).

The region encompasses southern Louisiana, Mississippi and the coastal areas of Alabama and Florida. Ten members of the Happiness Group were also in attendance, including pioneer Yoshiko Ford who shared how that encounter with her mentor served as a prime point in her life (see p. 5).

Applause-rousing components of the meeting included a song and dance by future division members, a re-enactment of the events of March 1974 from The New Human Revolution, Ikeda Youth Ensemble performances and a riveting experience from a district young men’s leader Matt Polopolus, who overcame challenges with his mental health and substance abuse. A Gohonzon conferral ceremony also took place, with one young man joining the SGI-USA.

On behalf of the youth of Gulf South Region, Maile Zox, the region young women’s leader, shared words of appreciation, which captured the spirit of the celebration:

The historic meeting 45 years ago, here at the mouth of the Mississippi River, where so much suffering still remains, became the turning point for the united struggle of mentor and disciple throughout the Southeast. With their seeking spirit inspired by Sensei, the Happiness Group set an eternal example of transforming poison into medicine and karma into mission.

. . . The warm hearts and undefeated spirit of the Happiness Group members remind us that we can truly accomplish our deepest dreams and goals . . . President Ikeda writes, “When we strive as disciples alongside our mentor, we can expand our state of life boundlessly” (May 2016 Living Buddhism, p. 42). The Happiness Group is proof of this. WT 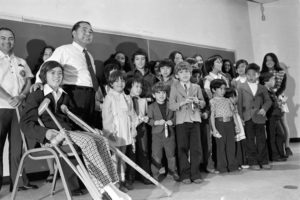 The following is an excerpt from The New Human Revolution, vol. 19, in which SGI President Ikeda discusses his 1974 visit to New Orleans. During a meeting, he named the local SGI-USA members in attendance the Happiness Group. Shin’ichi Yamamoto is President Ikeda’s pseudonym in the novel.

During his stay in Malibu [California], Shin’ichi [Yamamoto] held youth training sessions on three occasions, giving his all to fostering the next generation of leaders in the United States. On the evening of March 14 [1974], he flew to New Orleans, and the following day, he visited the University of New Orleans and met with its chancellor, Homer Hitt. In the evening, he attended a guidance meeting for local members.

New Orleans is located at the mouth of the Mississippi River and once flourished as a port for exporting cotton and other agricultural products. It is also known as the birthplace of jazz. It could be said that the city’s prosperity was built on the suffering of African Americans, who made up the rural labor force of the American South. Wishing to see this place of such sorrowful history transformed into a place brimming with happiness, Shin’ichi poured his heart and soul into speaking with everyone he met. He also named the group of members who attended the meeting that day the Happiness Group. Through this encounter, the members awakened to their personal mission and went on to cultivate luxuriant trees of happiness and trust in their communities and society at large.

Thirty years later, a Friendship Grove named after Shin’ichi and his wife, Mineko, was established in New Orleans City Park—a symbol of the triumph of the local members. (pp. 89–90)

“I Want You to Win! I’m Determined to Win, Too!

Sincere Offerings Is a “Way to Become a Buddha Easily”