“Without the disciple’s efforts to make it a reality, the mentor’s grand vision will remain an empty dream. The true value of the principles set forth by the mentor are only revealed when they are applied and developed.”

—SGI President Ikeda, from the epilogue of volume 1 of The New Human Revolution

At the start of the year, SGI members around the world began earnestly studying SGI President Ikeda’s epic, 30-volume series The New Human Revolution to both embody and transmit the history of kosen-rufu and the Soka Gakkai spirit to future generations.

In an essay, SGI Vice President Hiromasa Ikeda wrote that the coming age would be defined by how each of us, as disciples, puts into practice the spirit of Shin’ichi Yamamoto.[1]

How will we internalize this spirit and accurately hand it on to future generations? It could be said that all the members of the youth division are “The New Human Revolution generation” with a profound mission to fulfill.[2]

On June 28, 210 members of “The New Human Revolution generation” gathered at the Soka University of America campus to attend the 2019 Junior High and High School Division Conference themed “I Am Shin’ichi Yamamoto!”

And, for the first time in SGI-USA history, 10 members from Brazil, ages 14 to 18, joined the conference for a U.S.-Brazil future division exchange.
In a message to the conference, SGI President Ikeda asked the future division participants to persevere in faith, no matter what, adding that their progress would serve as a light of hope to illuminate the path of global kosen-rufu, leading to world peace.

By chanting, you will find wisdom, hope and courage welling forth from within. And you will be able to courageously win over any problem or suffering.

During the four-day conference, the participants engaged in sessions on topics, such as, “Finding Our Mission,” “Changing Society,” “Pursuing Higher Education” and “Struggles of Youth.” They were split into discussion groups, where they held lively discussions and openly shared their struggles and personal experiences. For the future division team and conference facilitators, these sessions embodied the hopes that SGI President Ikeda shared for these members in his message, when he asked them to “form treasured friendships” and “feel free to talk about anything with others” in a way “that is most natural to you.” 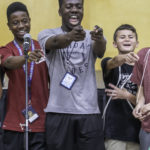 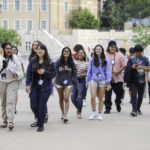 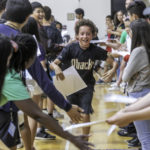 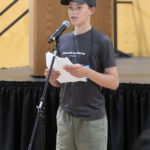 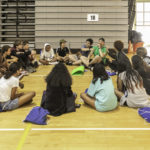 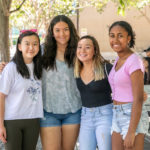 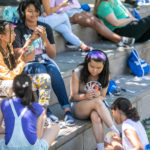 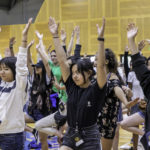 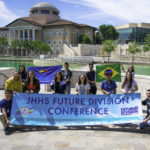 Igor Bomfim, of Brazil, was among eight participants to share their faith experiences during the conference. Igor shared the sadness he experienced after losing his father when he was just 4 years old, and the financial hardship that his family went through as a result.

His dream was to take part in the SGI Brazil Brass Band, and so he chanted every day, while helping his mother deliver the Brasil Seikyo newspaper to members. Eventually, he was selected to join the Brass Band and entered Brazil Soka High School on a scholarship. His dream now is to attend Soka University of America and become an aerospace engineer.

James Plummer and his friend Erris Maguire, of New York, shared a joint experience. Erris, who struggled with school and making friends, shared how she was embraced by James and his family. Together, James and Erris attended the 50,000 Lions of Justice Festival with 11 of their friends. After she experienced the benefits of chanting, Erris received the Gohonzon at age 11 and her mother, inspired by her transformation, decided to start practicing recently as well. All of the experiences were great indications of the mission that the current future division members have to lead the world in the direction of peace.

The conference would not have been possible without the dedicated support of the more than 60 SGI-USA youth leaders, who served as chaperones, Byakuren, Soka Group and facilitators, ensuring the complete success of the weekend with no accidents. Throughout the conference, each of them prayed deeply that every participant would create a prime point with their mentor.

During the open mic session, the participants shared impressions of the conference, filled with gratitude. They sincerely thanked their chaperones and the youth who supported behind the scenes, and expressed their appreciation for making many new friends. They shared words of encouragement with one another, saying things like: “Be yourself!” and “Never give up!”

After the conference, one young man said that he experienced a sort of happiness that he hadn’t felt in a long time, and he determined to come back every year. He shared how impactful it was to see so many members his age doing gongyo and proudly exclaimed, “I love being Buddhist!”
President Ikeda states in the conference message to the youthful successors of the future division that their progress would serve “as a light of hope that illuminates the path of global kosen-rufu, leading to world peace.”

This conference was indeed just that, marking a fresh departure for a new generation of Shin’ichi Yamamotos to emerge and create history toward 2030 and beyond! WT

“There Is No Destiny That We Cannot Change”