The following are excerpts from SGI President Ikeda’s speech at a Soka Gakkai New Year’s leaders meeting held in January 1993. These excerpts were featured in a video of the speech, which was shown during the 40th Soka Gakkai Headquarters Leaders Meeting of the New Era of Worldwide Kosen-rufu, held in Tokyo, on Jan. 12, 2019. This text originally appeared in the Jan. 22 issue of the Seikyo Shimbun, the Soka Gakkai’s daily newspaper.

Thank you for traveling from afar during the winter cold to attend today’s meeting.

In a letter sent to Ota Jomyo on Jan. 24, 1275, Nichiren Daishonin writes, “In matters pertaining to truth in both the sacred and secular realms, it is most important to determine what is superior and what inferior; [whether in the secular realm or the realm of Buddhism], one must know what is primary and what is merely secondary” (“The Tendai and True Word Schools,” The Writings of Nichiren Daishonin, vol. 2, p. 523).

In the realms of both society and Buddhism, we must discern what has true value and merit. We must also ensure that falsehood does not defeat truth.

Striving to be victorious—this is the essence of Buddhism, society and life.

Individuals, families and organizations are all engaged in a struggle, in a battle to succeed. That’s why Nichiren teaches us in his writings to win in both society and Buddhism.

Winning is the key to happiness, to hope and to the advancement of kosen-rufu.

And that is why we, proud Soka Gakkai members who are directly carrying on the Daishonin’s spirit, must not be defeated! We must win!

Because we have always striven in faith with this determination to win without fail, the Soka Gakkai has overcome all obstacles to achieve such incredible success and growth that some have described it as miraculous.

Those who bravely fight and win as heroic individuals in society committed to freeing people from suffering are Buddhas.

In a letter addressed to Nanjo Tokimitsu dated Jan. 11, 1280, Nichiren writes, “Just as flowers open up and bear fruit, just as the moon appears and invariably grows full, just as a lamp becomes brighter when oil is added, and just as plants and trees flourish with rain, so will human beings never fail to prosper when they make good causes” (“The Third Day of the New Year,” WND-1, 1013).

We are exerting ourselves earnestly day after day in Buddhist practice and study—for the sake of Buddhism, the welfare of others and kosen-rufu.

Just as softly falling snow steadily accumulates, our sincere faith will not fail to produce good causes that impart benefit to our lives. People of strong faith are certain to triumph and flourish in the end. Nichiren Buddhism teaches that they will enjoy boundless good fortune throughout the three existences of past, present and future, and lead lives of both spiritual and material happiness. This is all determined by our faith. That’s why it’s important to be serious and steadfast in faith.

The Buddha is described as “One Who Can Endure.” It is by enduring and overcoming the challenges of kosen-rufu and the misconceptions of those around us that we become eternal victors.

Another name for the Buddha is “Hero of the World.” Those who bravely fight and win as heroic individuals in society committed to freeing people from suffering are Buddhas.

In contrast, those who are constantly maneuvering to avoid making any personal effort may appear to be doing well on the surface, but they fail to gain good fortune. They do not accumulate good causes.

No matter how high their status or position, people who are only interested in exploiting the Soka Gakkai, and ungrateful individuals who betray their fellow members, actually erase their own good fortune.

Nichiren clearly identifies the fate of such individuals, when he writes, “People who despise the votaries of the Lotus Sutra seem to be free from punishment at first, but eventually they are all doomed to fall” (“On Persecutions Befalling the Sage,” WND-1, 997). 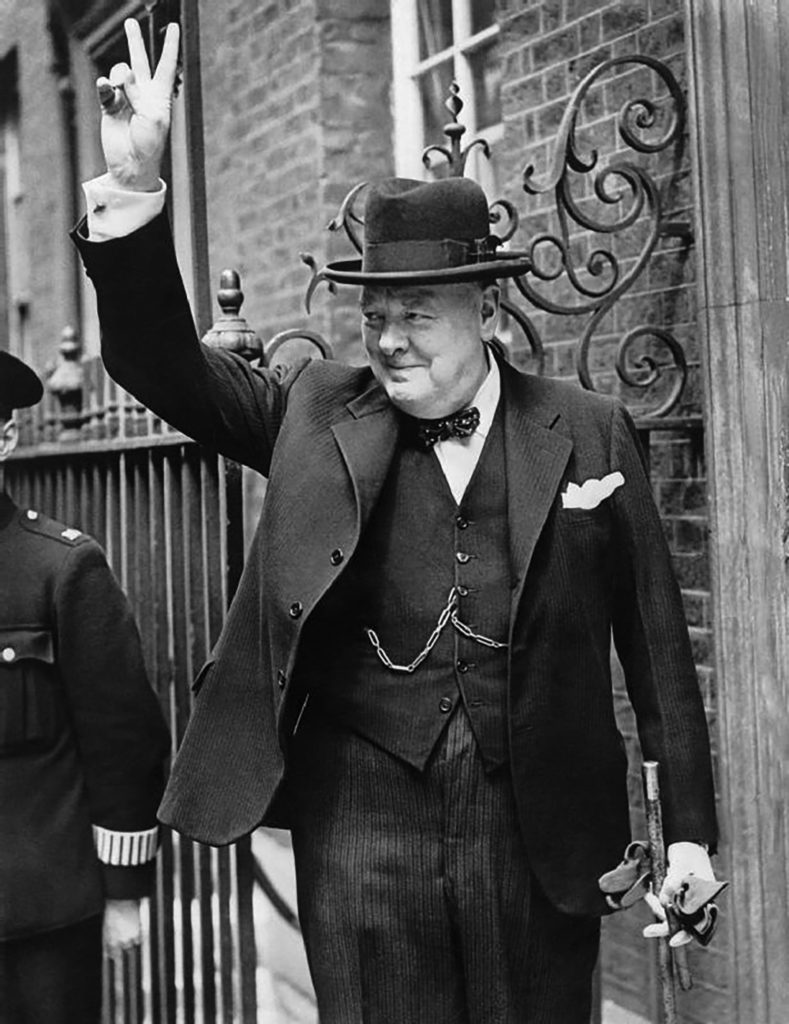 British statesman Winston Churchill gives his famous victory sign, 1943. Churchill was 65 when
he engaged in a full-on battle against the Nazi dictator, Adolf Hitler. SGI President Ikeda writes of Churchill: “When he took office as prime minister, he issued this stirring declaration in a speech that became famous around the world: ‘You ask, what is our aim? I can answer in one word: It is victory.’ ” Photo by WIKIPEDIA.ORG.

In 1942, in the middle of World War II, Soka Gakkai founding President Tsunesaburo Makiguchi rejoiced at the accounts shared by members of the wonderful actual proof of benefit they were experiencing through their Buddhist practice. And he sincerely praised them, saying: “The experiences that members relate are the result of their all-out efforts. They are like diamonds.”[1] He went on to say, “Religion until now has been too theoretical and lacked actual demonstration of its efficacy.”[2] Mr. Makiguchi firmly believed that the mission of the Soka Gakkai was to work to change this historical failing of religion.

This year once again, let’s together create great triumphant dramas of life that sparkle like diamonds and brim with boundless fortune and benefit.

Winston Churchill was 65 years old when he engaged in a full-on battle against the Nazi dictator, Adolf Hitler.

When he took office as prime minister, he issued this stirring declaration in a speech that became famous around the world: “You ask, what is our aim? I can answer in one word: It is victory.”[3]

With that unwavering aim, he fought on, convinced of final victory. He is renowned for always flashing the “V for victory” sign to inspire people.

At the time, Hitler’s madness was wreaking havoc and destruction all over Europe. Britain was in grave peril.

But Churchill greeted news of the worsening war situation as an exhilarating challenge. The grimmer the prospects, the more he roused his fighting spirit and calmly exercised leadership.

“The moment has come to prove my strength!” “The greater the challenge, the more satisfying the struggle!”—that was his spirit.

The world looking on thought that Britain had reached the end of the line, but Churchill called out in a speech to the House of Commons, which was later broadcast to the nation: “Let us therefore brace ourselves to our duty and so bear ourselves that if the British Commonwealth and Empire lasts for a thousand years, men will still say, ‘This was their finest hour.’ ”[4]

“Let us fight so that people a thousand years from now will hail our triumphant struggle as our finest hour!” Churchill declares.

Let us of the Soka Gakkai, too, advance with the conviction that our present struggle will be “our finest hour” for ten thousand years to come.

London continued to suffer devastating Nazi air raids. Rations and weapons were both in short supply. It was a time of turmoil and confusion.

After hearing a report on the state of the struggle, Churchill said, “The fact that the British Empire stands invincible, and that Nazidom is still being resisted, will kindle again the spark of hope in the breasts of hundreds of millions of downtrodden or despairing men and women throughout Europe, and far beyond its bounds, and that from these sparks there will presently come a cleansing and a devouring flame.”[5]

“Our struggle will ignite a flame of hope in people’s hearts!” declares Churchill.

I conclude my speech at the start of this new year with my sincerest prayers for your endeavors, good health and brilliant success in the year ahead.

“Toward a New Era Of Peace and Disarmament”