On July 20, 2019, the Seikyo Shimbun carried a photograph of the Soka Gakkai World Seikyo Center taken by SGI President Ikeda. The center’s completion, scheduled for November, will mark the beginning of a new era for the Seikyo Shimbun.

The “Bastion of the Pen” chapter of volume 10 of The New Human Revolution contains the following:

Kosen-rufu is a struggle of words. … Without words that encourage people, without words that demonstrate the truth of Buddhism and the correctness of the Soka Gakkai’s movement, kosen-rufu will never advance.[1]

Our “weapon” in this struggle of words has always been the Seikyo Shimbun.

The “Bastion of the Pen” chapter also details how the newspaper became a daily publication from July 15, 1965. Until then, it had been an eight-page newspaper published three times a week. Its daily publication was originally scheduled to begin in October, but Shin’ichi Yamamoto suggests moving up the start date, seeing as publication just three days a week was no longer keeping up with the organization’s rapid pace of development.

The “Winds of Happiness” chapter gives an account of a Japanese member living in Mexico who was newly appointed a leader. In the absence of a senior in faith for guidance, he would eagerly pore over every page of the Seikyo Shimbun that was sent to him from Japan. The subsequent chapter, “A New Course,” introduces a Japanese youth who, inspired by the activities and experiences of overseas members published in the newspaper, decides to devote his life to promoting worldwide kosen-rufu and move to West Germany. In this way, the Seikyo Shimbun had indeed become a source of inspiration driving the global development of kosen-rufu.

A mountain of challenges, however, lay in the way of making it a daily newspaper. One such problem was how to secure a smooth system for distribution. Nevertheless, under Shin’ichi’s leadership, each staff member involved with the project makes a firm determination to get it up and running—even if it means they would have to do it alone—resulting in the successful realization of the paper’s daily circulation.

Shin’ichi seizes every opportunity to give suggestions regarding the future direction of the Seikyo Shimbun. In his discussion with editorial executives, he talks about what it means for the newspaper to maintain its unique mission, and offers three guidelines:

First of all, it is a newspaper dedicated to kosen-rufu. … Second, it must be a newspaper that helps people understand the correct teaching of Buddhism. … Third, it must serve as a letter of encouragement that gives hope and courage to its readers.[2]

At about the same time that the Seikyo Shimbun was becoming a daily paper in Japan, organ newspapers were beginning to appear one after another in Soka Gakkai organizations around the globe. Through these publications, misconceptions in society about the Soka Gakkai were gradually corrected.

In the “Bastion of the Pen” chapter, Shin’ichi states: “The Seikyo Shimbun must become a wellspring of philosophy, an indomitable bastion of the pen foremost in the entire world.”[3] Taking this vision to heart, let us respond by further contributing to the development and promotion of the Seikyo Shimbun and all our organ publications.

The Wisdom for Imparting Encouragement

In August 1965, Shin’ichi attends a series of summer training courses, determined to give his all to firmly infuse the Soka Gakkai spirit in the hearts of his fellow members. Having entered the “essential phase” of the kosen-rufu movement, he feels it is time for the Soka Gakkai to further develop its activities in diverse fields and work toward establishing Buddhist humanism in society.

The “Bastion of the Pen” chapter details 10 factors that describe the Soka Gakkai spirit, including “having the courage to discard the shallow and seek the profound” and “selfless dedication to propagating the Law.”

Recognizing that the Soka Gakkai spirit can only be transmitted through one’s own behavior, Shin’ichi continues taking action for kosen-rufu while racking his brain over ways to further inspire his fellow members to rise up with joy and courage. The wisdom for imparting encouragement thus emerges from this kind of sincere determination and proceeds to manifest in different forms.

For instance, having concluded that inspiring district leaders would be vital to making fresh strides in the “essential phase” of kosen-rufu, Shin’ichi travels across Japan to attend district leaders meetings, doing his best to meet and shake hands with as many participants as possible. However, his hand gradually grows red and swollen from all this handshaking until it even hurts to hold a pen to write. He thus needs to think of some other way to encourage everyone and decides on taking commemorative photos with them instead. Through such photograph sessions, Shin’ichi strives to forge spiritual bonds with tens of thousands of members.

There is no doubt that Shin’ichi’s true desire was to directly encourage and exchange handshakes with each and every member. That is why he threw his entire being into inspiring them even in the limited time he had at each session. He was determined to “light the everlasting flames of commitment, joy and courage in the hearts of his fellow members.”[4] He was determined to imbue each moment with enduring value.

Today, we have access to videos of President Ikeda’s past speeches through video-on-demand platforms in Japan. His speeches are also forms of encouragement to us based on his resolve to offer lasting inspiration in each moment. It is therefore up to our attitude as disciples whether we use our mentor’s encouragement to drive our own human revolution or regard them merely as guidance given in the past.

The Founding of the Men’s Division

The “Crown Champion” chapter details the inaugural meeting of the men’s division held on March 5, 1966. The kosen-rufu movement had now entered the “essential phase” in which it was crucial that each individual show actual proof based on the principle of “faith equals daily life.” The men’s division was established on the basis that it was important for them to play more active roles in every sphere and thereby expand circles of trust in society.

At the meeting, Shin’ichi stresses that for the sake of the continuous development of kosen-rufu, it is important to combine the strength of prudence with the youthful, vigorous spirit of innovation. He also states that both the power of youth that fuels kosen-rufu’s development and the experience and wisdom of the mature, well-rounded men’s division members are crucial.

Although March 5 is the anniversary of the establishment of the men’s division, August 24, the date when President Ikeda joined the Soka Gakkai in 1947, has been designated as Men’s Division Day.

Founding President Tsunesaburo Makiguchi took faith when he was 57 years old, and second Soka Gakkai President Josei Toda was 45 when he stood up alone to carry out kosen-rufu following his release from prison. They were both of men’s division age.

I believe August 24 was designated Men’s Division Day to signify that the mission of men’s division members is to model their struggle on that of the three founding presidents as they strive to become “golden pillars supporting the citadel of Soka.”

Shin’ichi concludes his speech at the inaugural meeting with the following words: “If the men’s division develops remarkably and establishes a solid framework for kosen-rufu, our organization will remain secure forever.”[6] Indeed, the mission of the men’s division is extremely profound and noble when viewed from the perspective of ensuring the eternal development of the Soka Gakkai.

Translated from the June 31, 2019, issue of the Seikyo Shimbun, the Soka Gakkai’s daily newspaper. 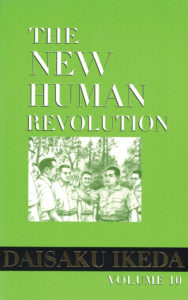 Bastion of the Pen
The first installment of The Human Revolution is published in the January 1, 1965, issue of the Seikyo Shimbun. The newspaper becomes a daily in July of the same year.

Winds of Happiness
Shin’ichi Yamamoto travels to Los Angeles shortly after the outbreak of riots sparked by racial injustice. He also travels for the first time to Mexico, which his mentor, Josei Toda, had dreamed of visiting just before his passing.

A New Course
Shin’ichi works to train capable individuals in Europe. In West Germany, he encourages young people who had moved there from Japan.

Crown Champions
On March 5, 1966, the men’s division is established.

Volume 10: Chapter One—Bastion of the Pen