The following are excerpts from SGI President Ikeda’s speech at a Soka Gakkai Headquarters Leaders Meeting held in April 1993. These excerpts were featured in a video of the speech, which was shown during the 42nd Soka Gakkai Headquarters Leaders Meeting of the New Era of Worldwide Kosen-rufu, held in Yokohama, Japan, on Aug. 31, 2019. The text was published in the Sept. 13 issue of the Seikyo Shimbun, the Soka Gakkai’s daily newspaper.

Today, April 20 [1993], marks the anniversary of the first issue of the Soka Gakkai’s newspaper, the Seikyo Shimbun, in 1951. I would like to take this opportunity to express my sincere gratitude to our uncrowned heroes, the Seikyo Shimbun deliverers, and all who assist and support them.

Please stay healthy and safe each day. I want you all to live long, wonderful lives in which you accumulate tremendous good fortune.

The Seikyo Shimbun has one of the largest circulations of any newspaper in Japan. More importantly, I am convinced that its profound content, setting forth guidelines for living, presenting a humanistic philosophy, celebrating the human spirit and showing the way to live as a human being—all based on Nichiren Buddhism—makes it foremost in the entire world.

Newspapers are a valuable “weapon” in the struggle of words. My dear friend Austregésilo de Athayde, president of the Brazilian Academy of Letters, also made use of newspapers in his spiritual struggle.

From his youth, Mr. Athayde worked as a journalist. He faced repeated persecution by Brazil’s military dictatorship. He was also imprisoned and forced to live in exile abroad.

But he never put down his pen. He continued writing ceaselessly to proclaim the truth to the people.

Real champions are those who remain true to the path of their convictions, never forsaking their principles.

Tirelessly speaking out for justice and the truth—this is also our spirit in sharing Nichiren Buddhism with others. Kosen-rufu is an unremitting struggle, a committed struggle to communicate our message.

I met Mr. Athayde for the first time on my recent trip to Brazil (in February 1993). His long years of struggle were deeply etched in his face. It was undeniably the face of a lion. As warriors for truth, our hearts resonated the moment we met.

“Let’s fight! Let’s work together to change the history of humankind!” he said when he greeted me at Rio de Janeiro International Airport.

Mr. Athayde described the mission of newspapers as being a force for the shining strength of the people, always standing between the present and future, discerning the course of history and focusing a keen eye on the world as a whole.

Newspapers are not just commercial ventures. Nor are they for the self-satisfaction of journalists. They exist for the sake of the victory of the people.

I sincerely hope that the Seikyo Shimbun will continue to inspire people everywhere, imparting ever-brighter hope while always working in solidarity with thinking people around the world.

Sending endless life-affirming waves of hope into the new century and the eternal future—that is the mission of the Seikyo Shimbun.

Real champions are those who remain true to the path of their convictions, never forsaking their principles. 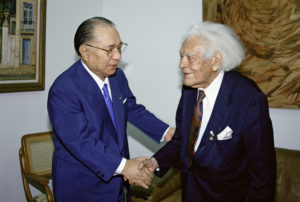 In a letter to his disciple Ota Jomyo, Nichiren Daishonin shares the following story: “Long ago, the so-called Woman Who Gave a Piece of Gold donated a gold coin to be used to gild a wooden statue [of a Buddha. Because of the benefits she received], for ninety-one long kalpas she was reborn with a golden body” (“The Woman Who Gave a Piece of Gold,” The Writings of Nichiren Daishonin, vol. 2, p. 681).

A “golden body” here symbolizes a life shining with boundless good fortune and benefit. One might say it is to have so much money pouring in that you proclaim: “Enough! I don’t need any more!” [Laughter.]

Joking aside, it means a life brimming with good fortune and the light of joy. This wonderful “golden body” will persist in lifetime after lifetime, the story says.

A sincere offering, even just a single gold coin, made at the appropriate time can result in immeasurable benefit—such are the unfathomable workings of the heart of faith.

In this same letter, the Daishonin further states that because Ota Jomyo and his wife made offerings to the Lotus Sutra, which is the “teacher” of all Buddhas, they will receive benefit far greater than the woman in the story and “be able to enter the realm of Buddhahood in their present lifetime” (“The Woman Who Gave a Piece of Gold,” WND-2, 681).

Nichiren’s words are never false. Everything unfolds just the way he says. I am fully convinced of this.

Today, we of the Soka Gakkai are making the supreme offering of spreading the Mystic Law. We are carrying out the noble undertaking of kosen-rufu. As such, we are guaranteed to enjoy even more good fortune and benefit than the “woman who gave a piece of gold.” We will absolutely achieve a “golden body”—that is the promise of Nichiren, the Buddha of the Latter Day of the Law.

And how immense is the benefit attained by those who deliver the Seikyo Shimbun!

The Daishonin declares: “It is through the use of words and letters that the Buddha saves living beings” (“Letter to Renjo,” WND-2, 6). Words have the power to lead people to happiness. Words can change our lives.

Though on a different dimension than the Buddhist sutras, the Seikyo Shimbun is also committed to leading people to happiness through words. It and its sister publications are the sole newspapers in the world dedicated to advancing kosen-rufu.

Those who deliver the Seikyo Shimbun are emissaries of the Buddha. Their efforts day after day cannot fail to produce great value. With each step they take on their rounds as they deliver the paper, they accumulate eternal benefit and good fortune.

It is my wish and prayer that these noble emissaries and their families will always be safe and enveloped in the unfading golden light of happiness.

In the age of overseas exploration of the 16th century, Luís Vaz de Camões (circa 1524–80), known as one of Portugal’s greatest poets, arrived at the Port of Macau after a long ocean voyage.

He wrote that those who abuse their power and authority to basely insult and malign others will never triumph, for they lack the very cause for victory. Real victory, he said, is won by those who champion “justice pure and whole.”[1]

Justice is power. We have advanced upholding the “justice pure and whole” of Nichiren Buddhism. That is why we have overcome all obstacles and won decisively. We have moved forward steadfastly, undaunted by any criticism or abuse. We have built a great network of trust and friendship around the world and created a supremely joyful organization.

Camões also declared that victory depends on wisdom, not power—these insightful words resonate with the spirit of Nichiren Buddhism.

The Daishonin teaches the principle of “substituting faith for wisdom.”[2]Our faith contains the wisdom for realizing happiness and victory. Neither our circumstances nor what others think matters; it is our own wisdom that counts. Wisdom is the key. To tap that wisdom, we need to rouse strong faith.

Prayers based on such faith always create a rhythm for victory, even if the results are not immediately apparent. Our Buddhist faith shows us that boundless wisdom opens the way to boundless victory.

Members from 20 countries worldwide have joined us today brimming with seeking spirit. I would like to express my sincere gratitude to them all. Thank you for traveling so far to be here.

In closing, I offer my deepest appreciation for your efforts and a rousing cheer to all our uncrowned champions delivering the Seikyo Shimbun.