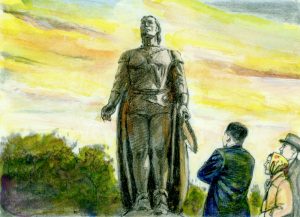 The second city the delegation visited on this travel for peace was San Francisco, where the United States–Japan Security Treaty of 1952 was signed together with the Treaty of Peace with Japan [also known as The San Francisco Peace Treaty]. Shin’ichi reflected on Japan’s unrest over the new security treaty, with those in support and in opposition of the treaty representing the ideologies of the East and West blocs.

Shin’ichi established a district in San Francisco, and after talking with a husband and wife who traveled from Nevada, announced the formation of a district there as well. He appointed the husband, an American, as the district leader, making him the first non-Japanese district leader in the Soka Gakkai.

In the discussion meeting he attended, Shin’ichi presented three guidelines to the members: Acquire U.S. citizenship, obtain a driver’s license and master English. These guidelines became the shared pledge for all members who immigrated to America.

On their way to visit Muir Woods National Monument, the party stopped near the Golden Gate Bridge where Shin’ichi explained the importance of uniting in the spirit of many in body, one in mind, through the display of the suspension cable that comprised separate strands of wire.

On their return from the national park, they stopped to take a photo in front of the monument of Christopher Columbus with some local members. Shin’ichi renewed his vow to pioneer a new world for kosen-rufu. 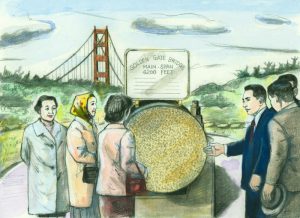 The Unity of Many in Body, One in Mind

As they headed away from the city, San Francisco Bay unfolded off to their right. Soon, the Golden Gate Bridge with its magnificent red towers came into view. As they approached, its soaring structure seemed to loom above them.

The group decided to stop for a short break at a small park near the bridge. Stepping out of their cars, they saw on display a section of the suspension cable used in the bridge. A sign explained that the cable was 37 inches in diameter and comprised 27,572 separate strands of wire. Shin’ichi and the others stood in a circle around the display.

“The cable is thick, but each wire is quite thin. How amazing that it can hold up the bridge!” exclaimed Katsu Kiyohara.

Nodding in agreement, Shin’ichi then spoke to Yukiko Gilmore and Chiyoko Taylor, who had been appointed respectively as the San Francisco District leader and women’s division leader the day before.

“It’s true that the individual wires are not very thick, but when bunched together in great numbers, they display incredible strength. This resembles the unity of itai doshin (many in body, one in mind). In the Soka Gakkai, too, though each person’s strength may be small, when that strength is combined and the members are firmly united, they can display unimaginable power. Unity is strength.

“From now on, you must play a central role in unifying the members’ efforts to support the kosen-rufu movement and the happiness of the people of San Francisco.”

The immensity of this lofty mission with which they were entrusted filled them with a sobering sense of responsibility. (The New Human Revolution, vol. 1, revised edition, pp. 118–19)

Victory or defeat in battle hinges upon whether one seizes the initiative at a key moment. When it comes to encouraging friends, as well, there are crucial times when one must act. (NHR-1, revised edition, 100)