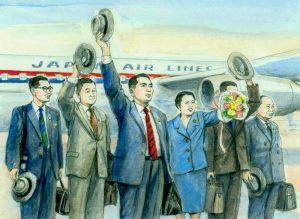 Only five months after becoming the third Soka Gakkai President, Shin’ichi Yamamoto set out on his first overseas trip on October 2, 1960, carrying in his heart his mentor second Soka Gakkai President Josei Toda’s injunction that the world was his stage. The first step was taken in Hawaii.

However, due to a miscommunication, when the delegation arrived at the airport, the member responsible for being the interpreter and guide was not there; instead, they were greeted by only one young man.

The next day, the delegation visited the National Cemetery of the Pacific and Pearl Harbor. Shin’ichi determined: “Hawaii—the island where the Pacific War began and a true melting pot of humanity—must lead the world as a model for peace” (The New Human Revolution, vol. 1, revised edition, p. 34).

In the discussion meetings they attended, Shin’ichi warmly encouraged Japanese members who were struggling to live in a foreign land with an unfamiliar language and customs. He also established the first district outside of Japan. After the discussion meeting, Shin’ichi returned to his hotel and gave his all to encouraging the newly appointed district men’s leader late into the night. By doing so he was taking steps to prepare for the future of kosen-rufu in Hawaii. Shin’ichi’s stay in Hawaii lasted only a little over 30 hours, but through one-to-one encouragement, he opened the first page of worldwide kosen-rufu. 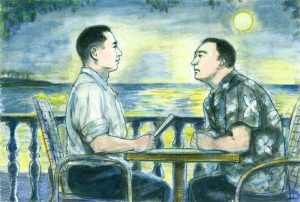 For the Happiness of All People

Hiroto Hirata’s eyes sparkled as he listened intently. Shin’ichi clearly sensed that his words were getting through to Hirata. He then began to talk about the proper attitude a leader should have toward faith.

As he spoke, the full moon cast a dim white reflection on the water, and waves could be heard lapping quietly upon the beach.

“I ask you to please spend your life from now on as a district leader who, together with me, lives for the members’ happiness. Most people find it is all they can do to worry about their own happiness and that of their immediate family. It is, therefore, no easy feat to live for the happiness of your friends and fellow members, for the sake of the Law and for kosen-rufu, while at the same time grappling with your own personal problems.

“The fact is, however, that when you worry, pray and struggle for the sake of others, you are proving by your very actions that you have transcended the bounds of your own individual concerns and are opening the way for your own splendid human revolution.

“The organization will change and develop in any number of ways depending on the ichinen, or deep-seated determination, of the central figure. People will follow a leader who always fights for them. But they will eventually perceive the real nature of someone interested only in personal fame or fortune and will stop supporting that person.”

In his pure seeking spirit toward Buddhism, Hiroto Hirata was like dry sand soaking up water. Shin’ichi grasped his hand and said: “I am the one who appointed you as district leader. If you fail, then I, too, will have failed. I will take full responsibility. Please fight to your heart’s content and to the best of your ability.”

A grand palace of happiness exists within your own heart. Faith is the key that opens the door to that palace. (NHR-1, revised edition, 43)