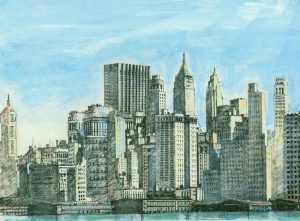 New York City at the time of Shin’ichi’s first visit to the metropolis, starting on October 13, 1960. Their next stop was the United States’ largest city, New York. The delegation visited the United Nations Headquarters, where Shin’ichi witnessed the representatives of newly independent nations of Africa. Seeing their vibrant expressions, Shin’ichi said: “The twenty-first century will be the century of Africa. The world should support this young sapling” (The New Human Revolution, vol. 1, revised edition, p. 202).

At a discussion meeting in New York, Shin’ichi encouraged members in despair, saying with power and conviction that those who have wept the most bitterly have the right to become the happiest of all people. Next, in a meeting in Washington D.C., the nation’s capital, Shin’ichi answered members’ questions and spoke about the spirit of humanism that underlies this Buddhism.

Meanwhile, Shin’ichi’s physical condition had worsened. Vice General Director Kiyoshi Jujo implored him to cancel his trip to Brazil, but Shin’ichi said resolutely that he must go as a disciple of Josei Toda. 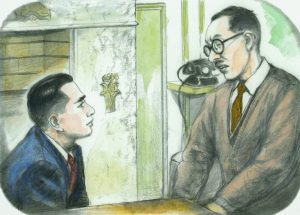 Shin’ichi took out the picture of his mentor, Josei Toda, that he kept in the inside pocket of his suit jacket. As he lay on the bed resting his weary body, Shin’ichi gazed steadily at it. The events of November 19, 1957—some five months before Toda’s death—came vividly to his mind. It was the day before Toda had collapsed, overtaken by illness. On that day, Shin’ichi had tried to stop his mentor from leaving for Hiroshima, fully aware that he risked incurring stern rebuke for doing so. Toda was gaunt as he never had been before. His physical strength was at its lowest ebb, and his body showed signs of painful debilitation. It was clear that if he continued to overexert himself, he would be placing his life in jeopardy.

As Toda lay resting on the sofa in one of the meeting rooms at the Soka Gakkai Headquarters, Shin’ichi knelt on the floor before him and bowed deeply to his mentor. “Sensei, please cancel your trip to Hiroshima. I beg you,” he implored desperately. “Please rest for a while.”

Toda responded resolutely: “How do you expect me not to go? I have to. As an emissary of the Buddha, I can’t turn my back on something once I’ve decided to do it. I will go even if it kills me! Can’t you see that this is the real meaning of faith, Shin’ichi? What’s gotten into you?”

Even now, the impassioned tones of his mentor still rang clearly in his ears.

That cry, Shin’ichi thought to himself, summed up the way a leader of kosen-rufu should live—a way of life that Toda had shown him through his own example.

Brazil was on the opposite side of the world from Japan, one of the countries lying the farthest distance away. When he thought of the many members waiting there to see him, Shin’ichi knew he absolutely had to go. He resolved to encourage them and to strive with all his might as long as there was still breath left in him. The fighting spirit he had inherited as a disciple of Toda blazed brightly in his heart. (NHR-1, revised edition, 241–43.)

Let us take, for example, one of those giant bronze temple bells that are so common in Japan. The sound it emits will depend on what you strike it with. If you use a great log and strike the bell with powerful force, it will reverberate loudly. But if you strike it with a matchstick or a wooden chopstick, it will emit only a feeble and ineffective sound.

Similarly, we have the Gohonzon, which is endowed with the immeasurable power of the Buddha and the Law. If, however, our faith and practice are weak, it will be like striking a giant bell with a matchstick; it will be impossible to bring forth any great benefit. (NHR-1, revised edition, 216)

Excerpts From Nichiren’s Writings in Volume 1