This installment, published in the October 24, 2018, issue of the Seikyo Shimbun, focuses on passages from Nichiren Daishonin’s writings that Ikeda Sensei discusses in volume 1 of The New Human Revolution.

“The great pure Law of the Lotus Sutra will be spread far and wide throughout Japan and all the other countries of Jambudvipa.” (“The Selection of Time,” The Writings of Nichiren Daishonin, vol. 1, p. 550)

From a Scene in the Novel 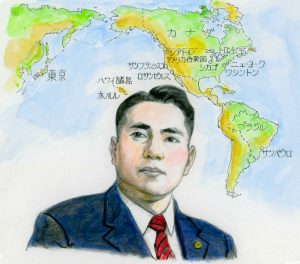 Shin’ichi thought to himself: “Nichiren Daishonin regarded the sufferings of humankind as his own and held aloft the banner of rissho ankoku—the desire to establish a peaceful society based upon his Buddhism. He clearly revealed the guiding principle that leads humanity to peace and happiness.

“Nichiren Daishonin wrote, ‘Can there be any doubt that … the great pure Law of the Lotus Sutra will be spread far and wide throughout Japan and all the other countries of Jambudvipa?’ (WND-1, 550). The Daishonin predicted the worldwide spread of his Buddhism and entrusted his disciples of future generations with the realization of this goal. Now that time has come.” Thirty-two years after his birth into this world, Shin’ichi had now taken on the accomplishment of global kosen-rufu as his life’s mission and was about to open the door to this great task that lay before him. The thought made his heart leap with excitement.

Nichiren Buddhism reveals that all human beings are endowed equally with the Buddha nature and that each individual is an entity of the three thousand realms in a single moment of life. It also elucidates the means by which human beings can cast off the shackles that bind them.

The Daishonin’s Buddhism, which espouses the dignity, equality and freedom of human beings, is truly a world religion dedicated to the realization of peace for all humanity. Illuminating the way toward the twenty-first century, it casts a great universal light of happiness over the world. (The New Human Revolution, vol. 1, revised edition, pp. 4–5)

“Life is limited; we must not begrudge it. What we should ultimately aspire to is the Buddha land.” (“Aspiration for the Buddha Land,” WND-1, 214)

From a Scene in the Novel

Far off beyond the lake’s edge, they could see mountains covered with trees aflame with red and golden hues, and veiled in a fine mist of rain. It looked like a watercolor canvas. “How beautiful! It’s just like a painting,” exclaimed Katsu Kiyohara. She then added in a soft, reflective tone, “But when I think that these beautiful leaves will soon fall, I’m reminded of life’s impermanence.”

Shin’ichi smiled and said quietly: “Perhaps the vivid autumn colors are the leaves’ attempt to express their fullest brilliance in the limited span of their lives. Everything is impermanent. None of us can escape the cycle of birth, aging, sickness and death. All we can do is base ourselves on the eternal Law and dedicate ourselves to our respective missions, while striving to burn strongly and brightly at each moment. Life is a struggle against a finite length of time. Hence, the Daishonin clearly writes: ‘Life is limited; we must not begrudge it. What we should ultimately aspire to is the Buddha land’ (WND-1, 214). What I desire most right now is enough time to fulfill my mission.”

There was a sense of urgency in Shin’ichi’s last words, but none of the others could grasp the depth of their meaning. Even more vivid than the golden autumn colors that spread among the trees was the vow to achieve kosen-rufu that blazed like a brilliant red flame in Shin’ichi’s heart. (NHR-1, revised edition, 147–48)