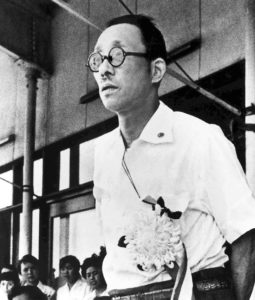 “A nuclear war cannot be won and must never be fought.” These words can be found in the joint statement released by the White House on Jan. 3, 2022, in which five of the most powerful countries of the world pledged to avoid nuclear war.

The countries that signed the joint statement are the U.S., Russia, China, the U.K. and France, also known as the “P5,” as they are permanent members of the U.N. Security Council. According to the International Campaign to Abolish Nuclear Weapons, the P5 also have the most nuclear warheads in the world.[1]

In wondrous synchronicity, on Sept. 8, 2022, we will be commemorating the 65th anniversary of second Soka Gakkai President Josei Toda’s Declaration for the Abolition of Nuclear Weapons. On Sept. 8, 1957, in front of the 50,000 youth members in attendance at a Soka Gakkai youth festival, Mr. Toda entrusted all Soka Gakkai youth with the mission to abolish nuclear weapons. He famously declared: “We, the citizens of the world, have an inviolable right to live. Anyone who jeopardizes that right is a devil incarnate, a fiend, a monster.”[2]

Ikeda Sensei, who, more than anyone, inherited the will of Mr. Toda to eradicate nuclear weapons. He has written peace proposals and editorials, and held countless dialogues. In his 2018 peace proposal, Sensei writes:

Why have I focused so singlemindedly on finding a resolution to the nuclear issue? This is because, just as Josei Toda discerned, so long as nuclear weapons exist the quest for a world of peace and human rights for all will remain elusive.[3]

How can I deal with ongoing uncertainty and turmoil?